The physical presence of Greece’s glorious ancient history is still visible through the country’s countless archaeological sites, buildings, and monuments. It should not come as a surprise, then, that the country boasts a rich list of UNESCO World Heritage Sites.
The United Nations Educational, Scientific and Cultural Organization (UNESCO) seeks to encourage the identification, protection and preservation of cultural and natural heritage around the world considered to be of outstanding value to humanity. Greece currently hosts eighteen UNESCO World Heritage Sites, with sixteen inscribed on the list for cultural heritage while the other two—Meteora and Mount Athos—included due to their exceptional natural landscape, as well as their cultural significance. 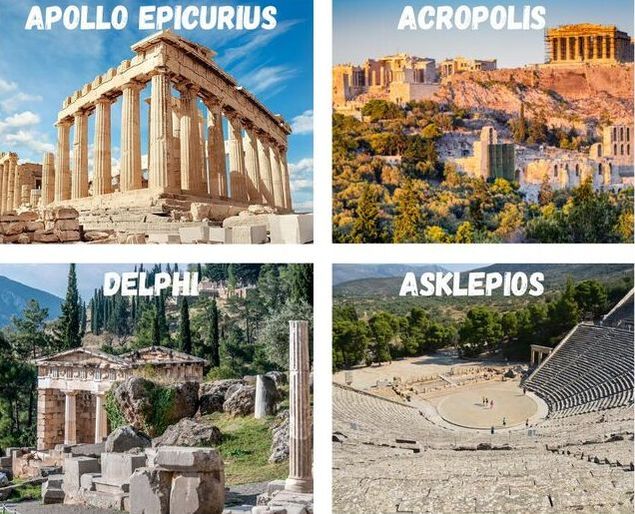 1.Temple of Apollo Epicurius at Bassae   (listed 1986)
The temple, dedicated to Apollo Epicurius, was built in the 5th century BC in the mountains of Arcadia. It is considered by UNESCO to be one of the best-preserved monuments of classical antiquity. It is the earliest monument that features all three classical orders, Doric, Ionic, and Corinthian. After falling out of use, the temple was forgotten for nearly 1700 years. It was rediscovered in the 18th century, attracting the attention of scholars and artists.

2. Acropolis (listed 1987)
The Acropolis of Athens and its monuments are universal symbols of the classical spirit and civilization and form the greatest architectural and artistic complex bequeathed by Greek Antiquity to the world. Standing on a steep hill above the city, it was originally a fortification and gradually developed into a religious sanctuary, associated with the cult of the goddess Athena. In the 5th century BC, following their victory over the Persians, the Athenians under Pericles constructed a large number of monuments including the Parthenon, the Erechtheion, the Propylaia, and the Temple of Athena Nike. The monuments in the Acropolis have prominently inspired the Neoclassical architecture.

The Acropolis was included in 1987 as an entire site that includes some of the greatest masterpieces of the classical period, such as the Parthenon, the Erechteion, the Propylaea, and the Temple of Athena Nike.

3. Archaeological Site of Delphi (listed 1987)
Located at the foot of Mount Parnassus, Delphi was the site of the Temple of Apollo, a Panhellenic sanctuary, and in Greek view the "navel of the world" (the Omphalos). Pythia, the oracle, resided in the temple, receiving pilgrims from all Greece. In the 6th century BCE, Delphi was seen as the religious centre and symbol of unity of the ancient Greek world.

4. Sanctuary of Asklepios at Epidaurus (listed 1988)
The cult of Asklepios, the god of medicine, developed in the city-state of Epidaurus at the latest in the 6th century BCE. The principal monuments at the site include the Temple of Asclepius, the Tholos, and the Theatre, which is considered to be the finest ancient Greek theatre. The sanctuary is important in the history of medicine, marking the transition from the belief in divine healing to the science of medicine. 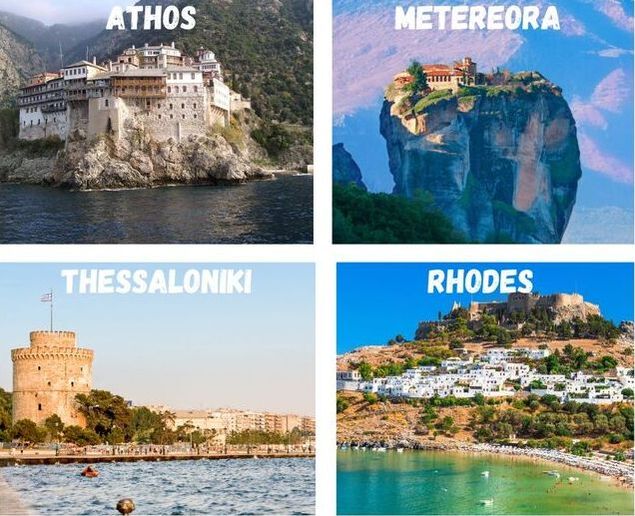 5. Mount Athos (listed 1988)
Situated on a narrow peninsula, Mount Athos has been governed as an autonomous entity since Byzantine times. An Orthodox spiritual centre since the 10th century, it is home to about 20 active monasteries, inhabited by some 1.400 monks.  Mount Athos has exerted lasting influence on the development of religious architecture and monumental painting.

6. Meteora (listed 1988)
Meteora is a rock formation of sandstone peaks, hosting 24 Orthodox monasteries. Many of them were built on the almost inaccessible peaks during the revival of the eremetic ideal in the 15th century. The monasteries (columns of the sky) from the 11th century on. are decorated by 16th century frescoes, which represent a key stage in the development of post-Byzantine painting.

7. Paleo Christian and Byzantine Monuments of Thessaloniki (listed 1988)
Founded in 315 B.C., the provincial capital and seaport of Thessalonika was one of the first bases for the spread of Christianity. Among its Christian monuments are fine churches, some built on the Greek cross plan and others on the three-nave basilica plan. Constructed over a long period, from the 4th to the 15th century, they constitute a diachronic typological series, which had considerable influence in the Byzantine world. The mosaics of the rotunda, St Demetrius and St David are among the great masterpieces of early Christian art.
​
8. Medieval City of Rhodes (listed 1988)
The island of Rhodes was occupied by the Order of St John of Jerusalem (Knights Hospitaller) from 1309 to 1523, who transformed the city of Rhodes into a stronghold and surrounded it with a 4-kilometre (2.5 mi) wall. The fortifications were built upon the existing Byzantine ones. The Upper town features several buildings from the Gothic period, including the Palace of the Grand Masters, the Great Hospital, and the Street of the Knights. When the Ottomans took the island, they converted most churches to mosques. Reconstruction took place during the Italian occupation in the early 20th century. 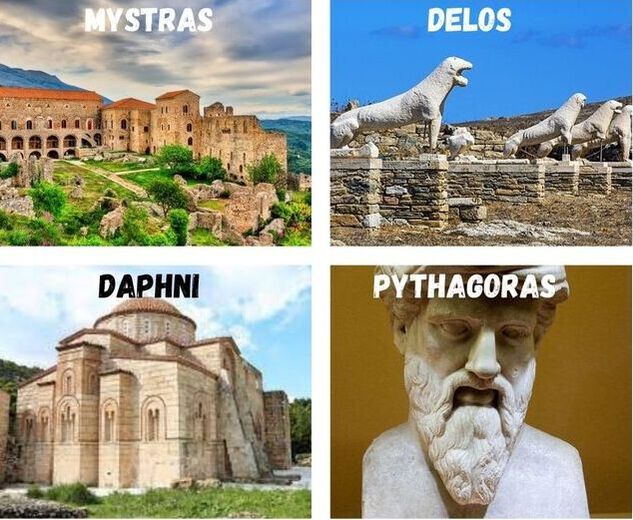 ​9. Archaeological Site of Olympia (listed 1989)
In the 10th century BCE, Olympia, in a valley in the Peloponnesus, became a centre for the worship of Zeus. It was a Panhellenic sanctuary and the location of the ancient Olympic Games, beginning in 776 BC. In addition to numerous temples and sanctuaries, it contains the remains of several sporting structures, such as its stadium. The Altis – the sanctuary to the gods – has one of the highest concentrations of masterpieces from the ancient Greek world.

10. Archaeological Site of Mystras (listed 1989)
The town of Mystras developed around the fortress erected in 1249 under the Prince of Achaia, William of Villehardouin, on the slopes of Mount Taygetus. In 1262, it was surrendered to the Byzantines and saw a great prosperity during the Palaeologan Renaissance era. It was later taken first by the Ottomans and then by the Venetians. After 1834, the inhabitants started leaving Mystras for the modern town of Sparta, and Mytras became a ruin.

11. Delos (listed 1990)
The birthplace of Apollo and Artemis according to Greek mythology, the sacred island of Delos was one of the most important Panhellenic sanctuaries during the Archaic and Classical periods. The sanctuary of Apollo on Delos attracted pilgrims from all over Greece, making Delos a prosperous trading port. It fell into decline after 69 BC. The archaeological site is exceptionally extensive and rich and conveys the image of a great cosmopolitan Mediterranean port.

12. Monasteries of Daphni, Hosios Loukas and Nea Moni of Chios (listed 1990)
These three monasteries, although located in different parts of Greece, are representative examples of the middle period of Byzantine religious architecture and they share the same aesthetic characteristics. All three churches share an octagonal plan; Nea Moni has a plain octagon while the two have the central space surrounded with a series of bays. The monasteries were decorated with marble works and mosaics in the 11th and 12th centuries.
13. Pythagoreion and Heraion of Samos (listed 1992)
The island of Samos has a strategic position in the Aegean islands near Asia Minor. It was a strong nautical and commercial power, reaching its peak in the 6th century BC. The site consists of the fortified ancient city (Pythagoreion) and the ancient Temple of Hera (Heraion). Samos is linked with important philosophers and mathematicians of the ancient world, including Pythagoras, Epicurus, and Aristarchus of Samos.

14. Archaeological Site of Aigai/Vergina (listed 1996)
The ancient city of Aigai was the first capital of the Kingdom of Macedon. In addition to the monumental palace, lavishly decorated with mosaics and painted stuccoes, the site contains a burial ground with more than 300 tumuli, some of which date back to the 11th century BC. One of the tumuli has been identified as that of Philip II of Macedon, father of Alexander the Great.

15. Archaeological Sites of Mycenae and Tiryns (listed 1999)
Mycenae and Tiryns were two of the most important cities of Mycenean Greece, which flourished between the 15th and 12th centuries BC. The cities were palace economies with monumental architecture, such as the Lion's Gate and Treasury of Atreus. The Linear B tablets are the first testimonies of the Greek language. Both cities are linked to the Homeric epics Iliad and Odyssey, which have influenced the European literature and arts ever since.

16. The Historic Centre with the Monastery of Saint-John the Theologian and the Cave of the Apocalypse on the Island of Patmos (listed 1999)
The Monastery of Saint-John the Theologian is dedicated to St John, who wrote both his Gospel and the Apocalypse on the island of Pátmos, according to Christian tradition. It was founded in the late 10th century, and it has been a place of pilgrimage and Greek Orthodox learning ever since. The old settlement of Chorá, associated with the monastery, contains many religious and secular buildings.

17. Old Town of Corfu (listed 2007)
The roots of the Old Town of Corfu, on the eponymous island, date back to the 8th century BC. Located at the entrance to the Adriatic Sea, the town was important in view of the defence of the maritime interests of the Republic of Venice against the Ottoman Empire. The Venetian engineers constructed three forts in the town. The Old Town buildings are mostly from the Venetian period and from the 19th century, when the island was a part of the British protectorate. As a fortified Mediterranean port, Corfu’s urban and port ensemble is notable for its high level of integrity and authenticity.

18. Archaeological Site of Philippi (listed 2016)
Philippi was founded in 356 BC by Philip II of Macedon. The city was a stop on the Via Egnatia and the site of the Battle of Philippi in 42 BC. The Romans reshaped it into a "small Rome", adding public buildings including a Forum to Hellenistic ones. Following the visit of the Apostle Paul in 49–50 CE, the city became an early centre of the Christian faith, as demonstrated by the remains of Christian basilicas and an octagonal church.