Every time we put together an issue focussed on a particular country, we're always on the lookout for ways to expose grandkids to that country's cultural heritage, especially the amazing arts and crafts. From miniature paintings to marbled paper, hand-woven kilims, carpets, ceramics and mosaics, Turkish artists have a long tradition of creating stunning art. So here are a few ideas you might like to explore with your grandkids and get their creative juices going.

1. Tie a piece of string to the head of a push pin. Tie the other end of the string to a pencil or crayon. About 15cms (6 inches) is a nice length to work with.

2. Lay the foam or cardboard (or even an old colouring book) down on the work surface. Place one sheet of paper on top.
3. Insert the push pin into the paper. Make sure it goes all the way through into the cardboard.

5. Remove the push pin and the string. 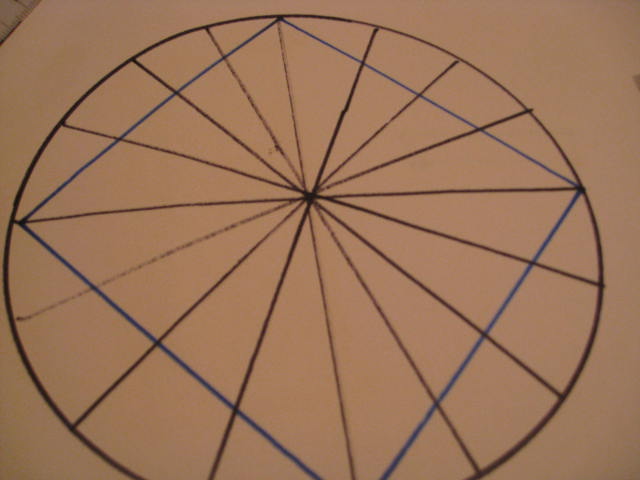 6. Help your child use a ruler to draw a straight line that divides the circle in half. This is a great time to sneak in some math-awareness questions like, “How can we find the middle of the circle?” or “How small of a slice can you make?” or “What does this shape remind you of? (i.e., a piece of pie, a pizza, a colour wheel).

7. Continue using the ruler to divide the circle into increasingly smaller sections. Note: Consider the size of your circle when figuring out how many slices. You want to leave enough room for your child to experiment layering in colours and details onto the mosaic template. I find that it works best to limit yourself to four lines (which creates eight sections).

8. Help your child inscribe a square onto the circle. To do this, use the ruler to connect the ends of the lines at the point where they touch the circle’s edge. Again, here’s another opportunity to help your child work on pattern recognition and basic geometry concepts. Ask questions like these, “What shape did we just draw? How many squares can you find in the drawing? Are there any triangles?”
​
9. Invite your child to colour in the different sections, using crayons, markers, chalk or coloured pencils. You may choose to have them just enjoy the process, colouring willy-nilly. But, if you want to create a recognizable pattern, then you’ll need to give them prompts like, “Let’s colour in all the triangles first. Which two colours do you want to use? Okay, let’s colour one triangle orange, and then the next triangle will be blue. And we’ll keep switching like that.”

Now you’ve got your own Turkish mosaic to hang at home! If you make a couple and laminate them, they could serve as cool, new place mats for your table.