How to grow tulips

The national flower of both Turkey and the Netherlands, tulips provide a dazzling show of rainbow colours and even stripes and variegates. Don't be put off if you've never tried growing bulbs before. They're not difficult to master and the reward if worth any effort. Here's all you need to know about getting the most out of this superb flower. 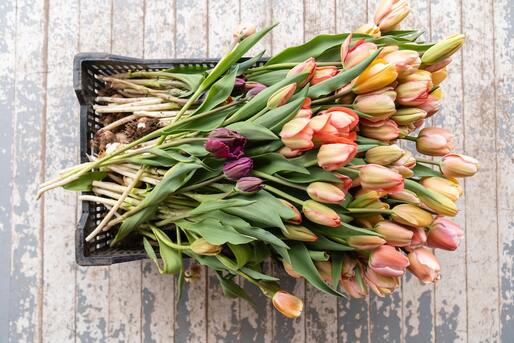 Planting tulip bulbs
Plant your tulip bulbs in late Autumn through to mid-winter. The cold temperatures help to wipe out viral and fungal diseases that lurk in the soil and which may infect the bulbs. Planting late is a traditional means of disease protection.

Most gardening books recommend planting tulips at twice the depth of the bulb – at about 8cm (3in) in the case of most tulips – but planting tulip bulbs much deeper, tulips are less likely to try to reproduce and are more likely to flower year after year.

You can plant tulips in your borders individually or in small groups amongst existing perennials, but if you are planting a lot of bulbs, it may be easier to dig out a trench or hole about 20cm (8in) deep. If you garden on heavy soil, cover the base with 5cm (2in) of washed sharp sand, horticultural grit, or spent compost. You can also add a handful of bone meal to encourage formation of next year’s flowers and mix it into the soil/grit at the base of the hole or trench.

Place the tulip bulbs, pointy end up, about 8cm (3in) apart and cover with soil. Again, if you garden on heavy soil you can mix grit at approximately one-third grit and two-thirds infill soil.

If you’re short of space, cover the bulbs with soil and then add a second layer of bulbs before filling in the hole. There is still enough soil above the bulbs to allow you to overplant the tulips without damaging them.

Planting tulips in a pot
Plant tulip bulbs in containers in late Autumn to mid-Winter. Use good, peat-free compost and ensure your pot has good draining.

To get dense and flowery spring pot displays, it’s best to layer bulbs in what the Dutch call a bulb lasagne – several layers of bulbs one on top of another with compost in between. The largest and latest flowering bulbs go in deepest, moving to the smallest and earliest in the top layer. The emergent shoots of the lower layer bulbs just bend round anything they hit sitting over their heads and keep on growing.

Done like this, you need to plant the bulbs slightly further apart than you would in a pot with a single layer, so 2-3cm (1-1½in) apart is about right. The first layer can go as deep as 28-30cm (11-12in), then cover them over with 5cm (2in) of potting compost, before you place the next layer of bulbs.

After flowering, remove the bulbs and plant into the ground before the summer. Leave the foliage intact, but remove any dead flowers so the tulip doesn't waste energy trying to make seed.
​
How to care for tulips
Watering
Water your tulips in well when you plant them, then it's unlikely you’ll need to water them again because it's bound to rain (this is the same for pots sitting outside). Though do water them during a prolonged dry spell. The tulips will start to sprout in March. If it’s still rainy, just let them get on with it.

Fertilising
After planting your tulips, mulch with organic matter. You could also mix in a slow-release fertiliser with your mulch at this stage. Fertliliser should not be placed directly into the planting hole. It is important not to use liquid fertiliser in autumn as the nutrients will just be leached away in the wet winter weather.

Come spring, feed your tulips again as the shoots first emerge. Feed with a slow-release fertiliser that will help build up the bulb’s reserves. Ensure that the leaves are left on after flowering so that they can continue to photosynthesise.

Staking
Staking tulips isn't necessary with deep planting. The bulb is anchored so deeply in the ground that it shouldn’t get blown over in the wind.

Deadheading
To deadhead tulips, cut the stem off just above the leaves. It is important to deadhead tulips, as this encourages the plant to put its energy into making bulbs for the next season, rather than seedheads. That said, remember to leave the browning foliage on your tulips until every leaf has died down, usually by early summer. This allows the bulb to store more food and produce flowers the following year.

Deadheading will minimise the risk of tulip fire, as the spores can persist in the petals after flowering. Removing them before they drop means they won’t land on the soil, where they could survive until the following season.