Cactus Flower was Goldie Hawn's breakout movie winning her plaudits for her acting. But as Goldie showed us that there was so much more to her than Laugh In sketches, there's so much more to cacti than spines and sculptural shape... the blooms can be simply amazing. And they're so easy to care for you'll wonder why you haven't experimented with them before. 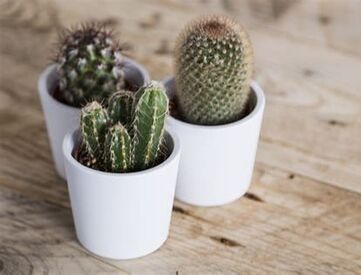 Desert cacti have a unique, stark beauty, and some of them feature the most beautiful flowers. Growing desert cacti is not difficult. These are among the toughest of all houseplants. There are dozens of kinds of desert cacti on the market and some species will bloom after three or four years in cultivation; others will take longer or never bloom indoors.

Forest cacti grow in tropical and subtropical regions throughout the world. They are often climbing or epiphytic plants that cling to trees and can make excellent hanging plants.

Light
Strong light is essential for healthy desert cacti, especially in the winter. Some species may scorch in direct summer sun if they haven't been hardened off first.
Forest cacti like bright, but not direct, sunlight. Move them outside during the summer.

Soil
Pot desert cactus into a fast-draining cacti mix. If one is not available, amend the regular potting soil with inorganic agents like sand or perlite to increase drainage and aeration. Cacti are slow-growing plants and will rarely need repotting. Also, remember that many species of cacti will bloom better when they are slightly under-potted.

For forest cactus, use a regular potting mix.​ Repot at the beginning of the growing season.

Water
In the spring and summer, when your desert cactus is actively growing and blooming or both, water whenever the compost begins to dry. During these waterings, make sure the plant is thoroughly watered. During the winter rest period, nearly cease watering. Only water if the plant begins to shrivel. The most common mistake with desert cacti is overwatering in the winter, which will cause rot either at the base of the plant or the tips of the growing areas. If the rot is advanced, it might be necessary to start new plants from cuttings or discard the whole plant.

Water your forest cactus as a normal houseplant during the summer months and when the buds begin to show. During the resting period, only water when the soil is dry to the touch. As with succulents and desert cacti, forest cactus should not be watered heavily during the rest period. Root rot will result. Advanced root rot can only be treated by taking new cuttings and starting over.

Temperature and Humidity
During the active growth period, desert cacti prefer hot, dry temperatures, ranging from 70-80 F In the winter, the plants prefer a cooler period, down to 55 F. In their desert habitats, many cacti are accustomed to very chilly nights. You must protect them from very cold winter drafts.
Forest cacti are somewhat less picky about temperature; during the growing season, they have a wide range, from 55-70 F. During the rest period, a colder spell of 50 F is essential.

Fertiliser
For desert cactus, use a cacti fertiliser during the growing season. Some growers have poor results with standard fertilisers, so it's probably worth it to seek out a specialised cacti fertiliser.

Pruning
Most cacti don't need pruning, just the removal of dead or damaged growth with clean, sharp garden shears. We strongly suggest wearing protective gardening gloves while you perform this task.
Propagating Indoor Cactus PlantsIf your cacti produce offshoots, you can propagate them. First, make sure you a have clean, sharp, sterile knife. Next, put on protective gloves to protect yourself: You do not want to get pierced by a cactus spine.
Slice off the offshoot as close to the base as possible. Let it sit in a dry place for a few days, giving it time to callus over the cut. Then, dip the cut end in rooting hormone, and lay it flat on top of a good growing medium, we suggest potting mix for cacti and succulents, and mist often. Once it develops strong roots, it can be planted in its own pot.

How to Grow Indoor Cacti From Seed
Growing both desert and forest cactus plants from seed takes patience: these are very slow-growing plants. But if you insist, you can either collect seeds from a cactus that's bloomed or buy packaged seeds. The seeds may need to be stratified before planting.
Prepare a potting mix for cacti and succulents, filled with perlite and sand. Plant seeds as deep as they are wide, and cover with a thin later of either sand or the cacti potting mix. Water lightly, cover with plastic, and sit in a bright location (but not direct sun). Most cacti will germinate in about three weeks, and once they do you can remove the plastic covering during the day. In about six months, seedlings should be ready for their own pots.

Potting and Repotting Indoor Cactus Plants
Cacti should be repotted when they need fresh soil (most are fine being pot-bound). To repot both forest and desert cacti, start by putting on a pair of protective gloves. Remove your plant from its current pot, and use a clean trowel to loosen the roots. Fill the bottom of a terra-cotta pot with fast-draining cacti potting mix (for desert cacti), or regular potting mix (for forest cacti). Add your plant, spoon in the potting mix around the sides, and use a stick-shaped tool—a chopstick works—to push the soil down. Water lightly.

Common Pests and Diseases
All types of cactus can be prone to pests including mealybugs, scales, fungus gnats, and spider mites.1 In most cases, it's possible to carefully wash these pests off of plants using cotton swabs and water.