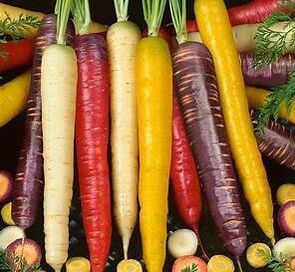 So what are heirloom and heritage plants? Well, put simply, these are ‘old school’ vegies and flowering plants that have been handed down from one generation of gardeners and farmers to the next. There is a bit of debate as to what constitutes a true heirloom with loads of people suggesting that 1951 be the ‘cut-off’ date, as, after this time, hybridized seeds and plants became more widely used in commercial agriculture. Others suggest (and I quite like this definition) that an heirloom plant is any that has been selected, bred and passed down because they were recognised for their superior qualities such as great flavour, pest and disease resistance, and suitability to local conditions.

Whichever definition you roll with, one thing remains consistent – for a plant to be classified as an heirloom, it must be open-pollinated. Open-pollinated plants are those that have been pollinated by ‘nature’, either by wind, insects, birds or other natural circumstances, and thus seeds produced, while regarded as ‘true to form’, are open to variation and genetic differences. This varies significantly from hybridised plants, where parent plants are bred (generally by human intervention) to encourage specific traits, like a particular colour or growth habit. Hybridized plants generally produce seed that is not viable (meaning it won’t shoot) or, if the seed is viable, the next generation of plants may lack vigour and prove to be a poor imitation of their parent plants.

Want an example? Take our good friend the carrot, a staple in many gardens and kitchens. It is reported (by the World Carrot Museum no less) that carrots were originally purple, skinny and presented a slightly orange centre, and that the orange carrot we have come to know and love was developed in Holland in the 1500’s. Patriotic Dutch growers developed the orange carrot (probably from a mutant purple one) by selective breeding, at which time it was adopted as the royal vegetable in honour of the House of Orange. The breeding and hybridisation of these carrots continued over centuries, to produce bigger, tastier and more vibrant orange carrots. The modern hybridised carrot we grab from the grocers is nothing like the original carrot, but, thanks to some savvy seed saving over the centuries, we are still able to grow a fair variety of heritage carrots (including the awesome purple ones!).

The Hoo-Ha About Heirlooms
Novelty factor aside, there are loads of ripping reasons to consider sticking in a couple of heirloom flowers and vegies into your patch (although weird coloured vegies is high on my list!). For starters, because heirloom vegies are open pollinated, gardeners can collect and save the seeds produced from their plants until next year, assured that they will grow ‘true to type’. Saving seed of heirloom vegies from one season to the next also encourages desirable traits to develop over time, including disease and drought resistance and better flavour. Speaking of flavour, heirloom vegies taste loads better than commercially grown, shipped to the supermarket stuff. Trust me, your tastebuds will thank you for it! The planet will thank you also, because growing heirloom vegies from seed is an awesome way to reduce your environmental footprint, and you can choose to use less pesticides, fertilisers and other artificial inputs than generally used in commercially grown crops.

But, the best reason to grow heirloom vegies may be this: they are dead easy, even for beginner green thumbs! Heirloom vegies don’t rely on excessive inputs, don’t need too much ‘molly-coddling’ and generally give you amazing ‘bang for your buck’, providing greater yields over a longer period of time. How good is that? All this for the price of a packet of seeds!

Whether it’s for health, financial or environmental reasons, turning even part of your backyard into a productive patch is incredibly rewarding, great for the planet and darned tasty! To ‘grow your own’ fruit and vegetables is one of the most environmentally friendly things you can do and whacking even a few heritage and heirloom varieties in the patch makes a good thing even better.

So, this spring, why not seek out some open-pollinated, heritage seeds for your Yummy Yard, and impress your friends and families with a tasty, good looking bit of history that’s great for the planet! Trust me, nothing fires up dinner party conversation like a purple carrot (and a couple of bottles of good organic beer!). Enjoy!

Open pollinated, non-hybridised heritage seeds and even seedlings are becoming far easier to track down, and many good garden centres stock a great range. A couple of other places to try would be these great Australian companies, doing their darnedest to preserve vegie genetic diversity and great tasting, edible crops: