Qin Shihuang (259-210 B.C.E.) conquered much in this life, but his driving purpose was even greater; he sought to conquer death. In order to achieve immortality, he built himself a tomb—a vast underground city guarded by a life-size terracotta army including warriors, infantrymen, horses, chariots and all their attendant armour and weaponry. 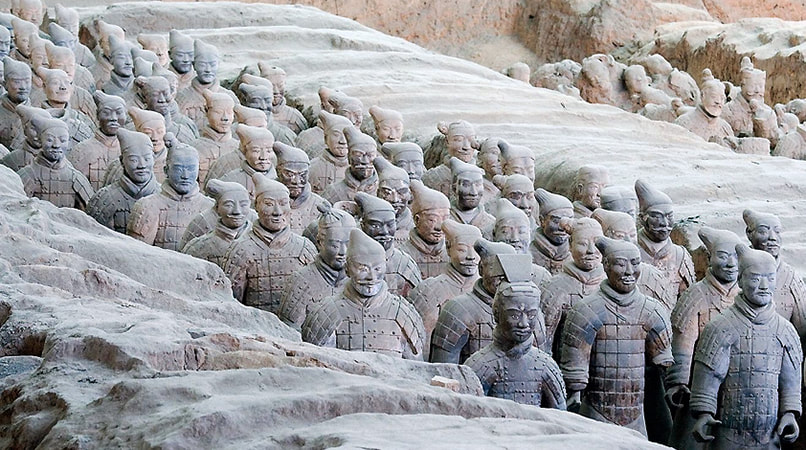 The underground terracotta army found in the First Emperor’s burial complex is undoubtedly one of the most remarkable and mysterious discoveries from the ancient world.

Besides revealing much about an ancient way of life, observing the physical construction of the underground complex and the methodical production of the figures reveals a set of themes from which we gain a window of insight to the First Emperor’s worldview and enduring influence.

The First Emperor is known for stunning innovations that consolidated his rule, standardizing currency, writing, measurements and more. He connected cities and states with advanced systems of roads and canals and is also credited with continuing the construction of the Great Wall. We also see the first assembly-line style of production in the creation of his terracotta warriors. 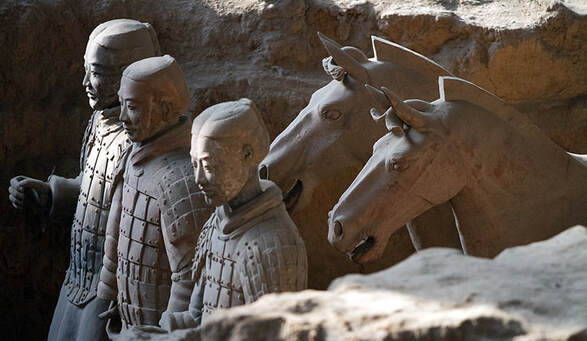 Perhaps the most fascinating aspect of the burial complex is what it suggests about the young Emperor’s obsession with immortality. Driven to conquer death itself, the eventual First Emperor ascended to the throne of the Qin state at age of 13 and immediately began to plan his burial, and more importantly, his underground palace, a mausoleum attended by an army including over 7,000 terracotta warriors horses, chariots and weaponry intended to protect him in the afterlife. The First Emperor envisioned a subterranean domain that would parallel his worldly existence after corporal death.
According to Han-dynasty historian Sima Qian, the First Emperor lined his burial complex with a treasury of riches and piles of precious gemstones said to represent the stars, sun and moon.

Excavation also revealed strangely high levels of mercury and evidence that the poisonous substance coursed through an intricate system of underground troughs, replicating the topography of actual rivers and seas carving the surrounding landscape. Some suggest that the emperor believed mercury had life-giving power and so surrounded himself with the toxic element, believing it was yet another way he might live forever. 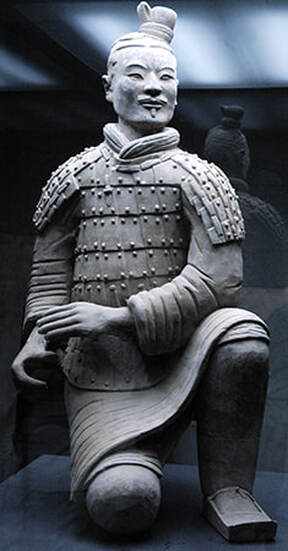 When the burial complex was first discovered by farmers in 1974, archaeologists set to work on one of the most astonishing ancient sites on record. The excavation uncovered a sprawling citadel with thousands of warriors, each designed with a unique face and clothing. The dig also uncovered horses, chariots, bronze ritual vessels, jade jewellery, and gold and silver ornaments. According to historian Sima Qian, the emperor so feared that his artisans “might disclose all the treasure that was in the tomb, . . [that] after the burial and sealing up of the treasures, the middle gate was shut and the outer gate closed to imprison all the artisans and labourers, so that no one came out.”

The story of the burial complex is also fascinating because it was conceived by such a very young individual. Court records reveal that, despite taking the throne at the age of 13 (in 246 B.C.E.), the eventual emperor ordered construction to begin almost immediately. Enormous numbers of laborers worked on the project, which was halted as the dynasty neared collapse. To date, four pits have been partially excavated. Three contain terracotta soldiers, horse-drawn chariots and weapons. The fourth pit was found empty, a testament to the original unfinished construction.

One of the most extraordinary features of the terracotta warriors is that each appears to have distinct features—an incredible feat of craftsmanship and production. Despite the custom construction of these figures, studies of their proportions reveal that their frames were created using an assembly production system that paved the way for advances in mass production and commerce. Archaeologists estimate that the objects, including figures, horses, and weapons, number in the thousands, though the true total may never be known.