Everyone is familiar with the image of the whirling dervish, clad completely in white and spinning expertly as if in a trance. However, the dervish is much more than a visual spectacle, dating back over 700 years and a part of Sufism and the Mevlevi Order.
​ 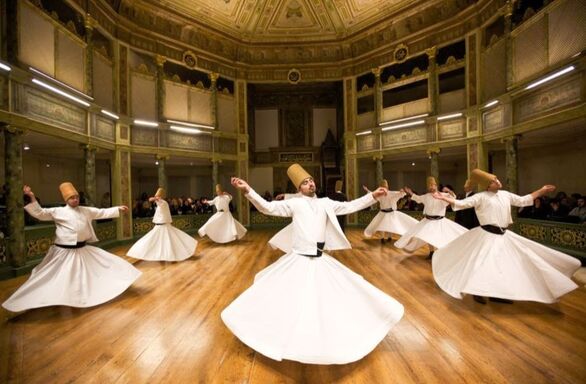 Of the numerous orders of Islam, Sufism is defined as the inner and mystical dimension.

The whirling dance was popularized by Mevlana Jalaluddin Rumi (1207-1273), who was a Sufi mystic and poet. As legend has it, Rumi chanced upon goldbeaters in the town marketplace singing songs in reverence to Allah, and he began spinning in a circle with arms outstretched. As Rumi whirled, he entered a trance and became ecstatic, and with that, the dance was born. After Rumi’s demise, his followers continued with the practice and formed the Mevlevi sect. The order gained prominence under the Ottoman Empire when it contributed significantly to music and poetry.

Rumi, as the founder of the dance, said that the dervishes represent the planets going around the sun in the solar system. The whirling dervishes acknowledge humanity’s place in the cosmos and join in the movement of the earth. The dance is also interpreted as a re-enactment of death and resurrection, where the mind transcends, and the body is left to the ground. The dance is often viewed as a way of uniting with cosmic powers as well as with eternity and establishing a relationship between humanity and divinity.
The whirling dance features prominently in the Sama Ceremony performed in the ritual hall (samahane). To become a dervish a boy must attend schools referred to as tekkes, where after 1001 days, he could be allowed to perform the dance. The Whirlers had to fast for several hours before commencing the dance. The ritual is strict and predetermined, and the dancers begin by bowing to the Sheikh, around whom they whirl. The Sheikh remains spinning on his axis. The whirlers don tall brown hats referred to as sikke which represents the tombstone.

The Devr-i-Veled Walk involves a stately procession by the whirlers around the hall while wearing black cloaks (hirka) to symbolize the grave. Next, the dervishes stretch out their arms to let the black cloaks fall off revealing white robes or tennure which represent the shroud of the ego, signifying they are spiritually reborn to the truth. The dancers proceed to spin on their left foot while their right palms are outstretched upwards, and their left ones face on the ground. The right hand is placed to receive God’s beneficence which is bestowed upon the earth through the left hand. The eyes remain open but unfocused, and a musical repertoire known as ney is played. At the end of the dance, a part of the Qur'an is read, and the dervishes and the Sheikh depart with a greeting of peace.

Originally, the Semahane Ceremony was a weekly remembrance of God, a ritual practiced by each Mevlevi tekke community where everyone was present, including Mevlevi musicians, women, and non-resident dervishes who chanted the Mevlevi ‘zikr,’ or prayer, silently in their hearts.

With the fall of the Ottoman Empire after WWI, the Sufi organizations were declared illegal, and the tekkes were either closed down, adapted into mosques, or turned into museums. Two of the most important remaining Mevlevihane are the ones in Konya (where Mevlânâ is buried) and the Galata Mevlevihanesi in Istanbul. By 1953 public performances of the Mevlevi Sema, or the Whirling Prayer Ceremony, were permitted by the Turkish government, and soon large crowds came from all over the world to watch displays organized by the Ministry of Culture and Tourism.