The history of silk.

The production of silk originated in Neolithic China within the Yangshao culture (4th millennium BCE). Though it would later reach other places in the world, the art of silk production remained confined to China until the
​Silk Road opened at 114 BC, though China maintained its virtual monopoly over silk production for another thousand years. 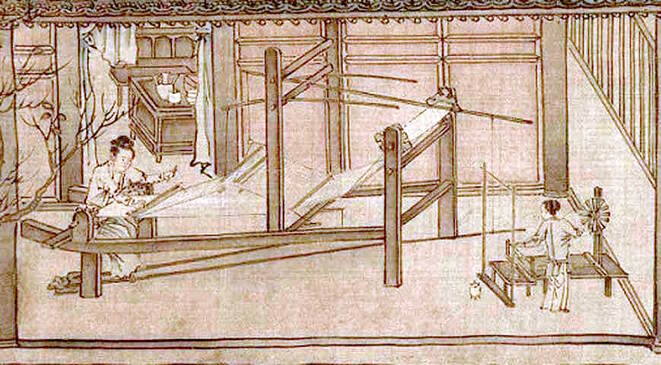 Weaving silk.
Silk cultivation spread to Japan around 300 AD, and, by 552 AD, the Byzantine Empire managed to obtain silkworm eggs and were able to begin silkworm cultivation; the Arabs also began to manufacture silk at the same time.
The Crusades brought silk production to Western Europe, in particular to many Italian states, which saw an economic boom exporting silk to the rest of Europe. During the 16th century, France joined Italy in developing a successful silk trade.
​
The Industrial Revolution changed much of Europe's silk industry. Due to innovations in the spinning of cotton, cotton became much cheaper to manufacture, leading to cotton production becoming the main focus for many manufacturers, and causing the more costly production of silk to shrink. New weaving technologies, however, increased the efficiency of producing silk cloth; among these was the Jacquard loom, developed for the production of highly detailed silks with embroidery-like designs. An epidemic of several silkworm diseases at this time caused production to fall, especially in France, where the industry never fully recovered.

In the 20th century, Japan and China regained their earlier dominant role in silk production, and China is now once again the world's largest producer of silk. Silk is thought of as a luxury good, with a greatly reduced importance compared to its historical heyday. 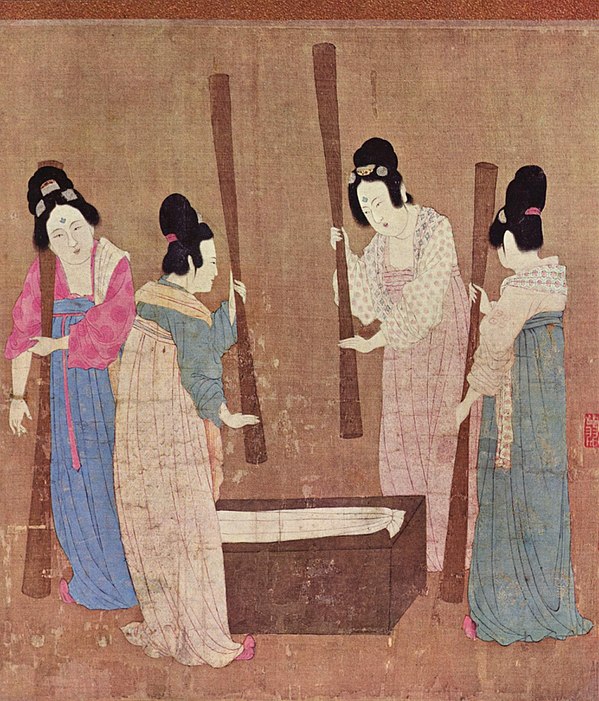 Court women preparing silk
First appearance of silk
The earliest evidence of silk was found at the sites of Yangshao culture in Xia County, Shanxi, where a silk cocoon was found cut in half by a sharp knife, dating back to between 4000 and 3000 BC. The earliest extant example of a woven silk fabric is from 3630 BC, used as wrapping for the body of a child.
Even though silk spread rapidly across Eurasia, with the possible exception of Japan, its production remained exclusively Chinese for three millennia.

Myths and legends
Many myths and legends exist as to the exact origin of silk production; the writings of both Confucius and Chinese tradition recount that, in about 3000 BC, a silk worm's cocoon fell into the teacup of the Empress Leizu. Wishing to extract it from her drink, the 14-year-old girl began to unroll the thread of the cocoon; seeing the long fibers that constituted the cocoon, the Empress decided to weave some of it, and so kept some of the cocoons to do so. Having observed the life of the silkworm on the recommendation of her husband, the Yellow Emperor, she began to instruct her entourage in the art of raising silkworms - sericulture. From this point, the girl became the goddess of silk in Chinese mythology.

Knowledge of silk production eventually left China via the heir of a princess who was promised to a prince of Khotan, likely around the early 1st century AD. The princess, refusing to go without the fabric that she loved, decided to break the imperial ban on silkworm exportation.

Though silk was exported to foreign countries in great amounts, sericulture remained a secret that the Chinese carefully guarded. In classical antiquity, most Romans, great admirers of the cloth, were convinced that the Chinese took the fabric from tree leaves.[11] This belief was affirmed by Seneca the Elder in his work Phaedra, and by Virgil in his work Georgics. Pliny the Elder notably accurately determined where silk came from; speaking of the Bombyx or silk moth, he wrote in his Natural History that, "They weave webs, like spiders, that become a luxurious clothing material for women, called silk." 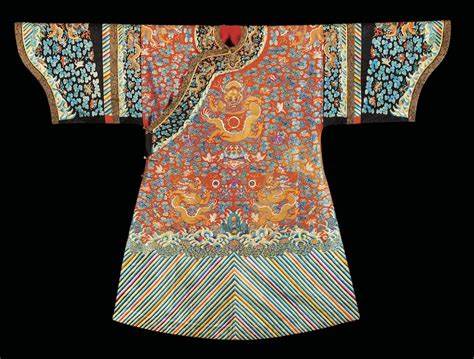 Qing Dynasty imperial silk robe
Silk usage in ancient and medieval China
In China, silkworm farming was originally restricted to women, and many were employed in the silk-making industry. Silk provoked such a craze among the high society that the rules in the Li Ji were used to limit its use to the members of the imperial family
For approximately a millennium, the right to wear silk was reserved for the emperor and the highest dignitaries. Silk was, at the time, a sign of great wealth, due to its shimmering appearance, created by the silk fiber's prismatic structure, which refracted light from every angle. Silk gradually extended to the uppermost noble classes of Chinese society and began to be used for decorative means and also in less luxurious ways; musical instruments, fishing, and bow-making all utilized silk. Peasants, however, did not have the right to wear silk until the Qing dynasty (1644–1911)

During the Han dynasty, silk became progressively more valuable in its own right. Lengths of silk cloth were used to pay government officials and to reward citizens who were particularly worthy. Much like the gold standard, a length of silk cloth became a monetary standard in China, in addition to bronze coins. The military payrolls tell us that soldiers were paid in bundles of plain silk textiles, which circulated as currency in Han times. Soldiers may well have traded their silk with the nomads who came to the gates of the Great Wall to sell horses and furs.[15]
For more than a millennium, silk remained the principal diplomatic gift of the emperor of China to neighbouring countries or vassal states.
The use of silk for clothing and accessories was regulated by a very precise code. The Tang Dynasty and Song Dynasty used colour to denote the various ranks of bureaucrats, according to their function in society, with certain colours of silk restricted to the upper classes only. Under the Ming Dynasty, silk began to be used in a series of accessories: handkerchiefs, wallets, belts, but these accessories remained associated with particular positions in society and there was specific headgear for warriors, for judges, for nobles, and others for religious use.