Il Miolone, the account of the travels of Marco Polo, is one of the first travelogues ever written. It covers his time in Asia, some 24 years,
​including 17 spent in China.​ 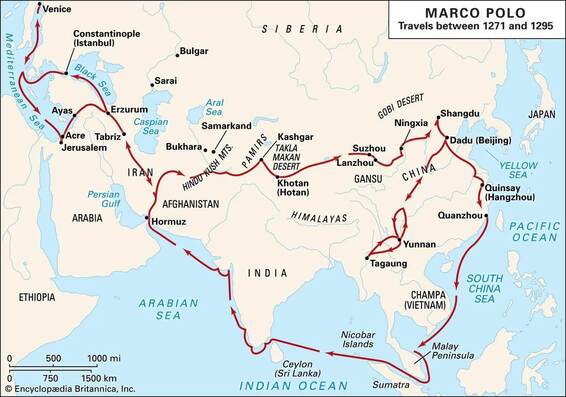 Possibly the most famous traveller of the Silk Road. Marco Polo was born in 1254 in Venice but little is known of his childhood. Polo’s passage through Asia was paved by the pioneering efforts of his ancestors, especially his father, Niccolò, and his uncle, Maffeo. The family had traded with the Middle East for a long time, acquiring considerable wealth and prestige. Although it is uncertain if the Polos were of the nobility, the matter was of little importance in Venice, a city of republican and mercantile traditions.
​
The family appears to have been shrewd, alert, and courageous. About 1260 they foresaw a political change in Constantinople, with the overthrow of Crusaders rule, and liquidated their property there, invested their capital in jewels, and set off for the Volga River, where Berke Khan, sovereign of the western territories in the Mongol Empire, held court at Sarai or Bulgar. The Polos apparently managed their affairs well at Berke’s court, where they doubled their assets. When political events prevented their return to Venice, they travelled eastward to  Bokhara and ended their journey in 1265, probably at the grand khan’s summer residence, Shangdu (immortalized as Xanadu by English poet Samuel Taylor Coleridge). Establishing friendly relations with the great Kublai Khan, they eventually returned to Europe as his ambassadors, carrying letters asking the pope to send Kublai 100 intelligent men “acquainted with the Seven Arts”. They also bore gifts and were asked to bring back oil from the lamp burning at the Holy Sepulchre in Jerusalem. 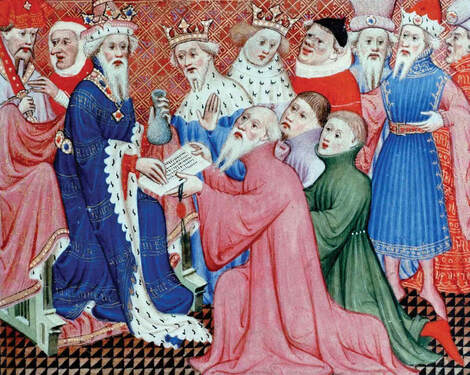 The Polos receiving credentials from Gregory X.
Marco was aged 15 or 16 when his father and uncle returned to meet him and learned that the pope, Clement IV, had recently died. Niccolò and Maffeo remained in Venice anticipating the election of a new pope, but in 1271, after two years of waiting, they departed with Marco for the Mongol court.

In Acre (now in Israel) the papal legate, Teobaldo of Piacenza, gave them letters for the Mongol emperor. The Polos had been on the road for only a few days when they heard that their friend Teobaldo had been elected pope as Gregory X. Returning to Acre, they were given proper credentials, and two friars were assigned to accompany them, though they abandoned the Polos shortly after the expedition resumed.
From Acre the travelers proceeded to Ayas, now Yumurtalik, on the Gulf of İskenderun, in southeastern Turkey then through Erzurum, in what is now eastern Turkey, and Tabrīz, in what is now northern Iran, later crossing inhospitable deserts infested with brigands before reaching Hormuz on the Persian Gulf. They continued through eastern Iran to Badakhshān in Afghanistan where they remained for a year.

Leaving Badakhshān, the Polos proceeded toward the Pamirs, descending on the northeastern side of the chain, they reached Kashi in what is now the Uygur Autonomous Region of Xinjiang, China. By this point the Polos were on the main Silk Road.
It is not clear whether they reached the Mongol summer capital of Shangdu (“Ciandu”) directly or after a detour; in any event, sometime in 1275  the Polos were again at the Mongol court, presenting the sacred oil from Jerusalem and the papal letters to their patron, Kublai Khan.mFor the next 16 or 17 years the Polos lived in the emperor’s dominions. 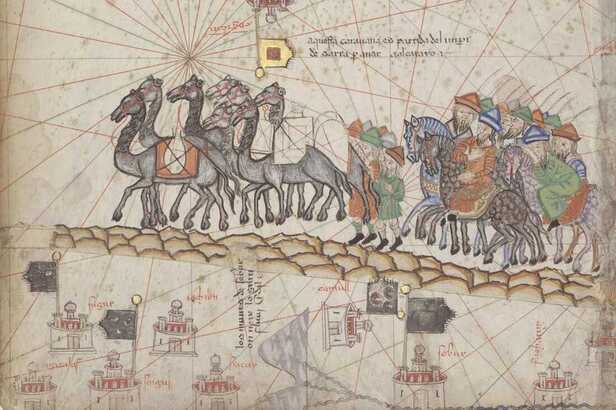 The Polo family caravan.
​Unfortunately, because Marco’s book Il milione is only incidentally a biography and autobiography, it is exceedingly difficult to ascertain where the Polos went and what they did during these years. Nevertheless, it is well known that many foreigners were in the employ of the state, since the Mongol rulers did not trust their Chinese subjects; so it would have been natural for the Polos to fit in most honourably and successfully with this motley society.
​
Marco was about age 20 when he reached Cathay. Although he knew little or no Chinese, he did speak some of the many languages then used in East Asia—most probably Turkish (in its Coman dialect) as spoken among the Mongols, Arabized Persian, Uighur (Uygur), and perhaps Mongol. He was noticed very favourably by Kublai, who took great delight in hearing of strange countries and repeatedly sent him on fact-finding missions to distant parts of the empire. Apart from the missions he undertook for the emperor, Polo may have held other administrative responsibilities, including inspection of the customs duties and revenues collected from the trade in salt and other commodities.
Sometime around 1292 a Mongol princess was to be sent to Persia to become the consort of Arghun Khan, and the Polos offered to accompany her. Marco wrote that Kublai had been unwilling to let them go but finally granted permission. They were eager to leave, in part, because Kublai was nearly 80, and his death (and the consequent change in regime) might have been dangerous for a small group of isolated foreigners. Naturally, they also longed to see their native Venice and their families again.
​The princess, with some 600 courtiers and sailors, and the Polos boarded 14 ships, which left the port of Quanzhou and sailed southward, settling for five months on the island of Sumatra to avoid monsoon storms. There Polo was much impressed by the fact that the North Star appeared to have dipped below the horizon. The fleet then touched land again in Sri Lanka, followed the west coast of India and the southern reaches of Persia, and finally anchored at Hormuz. The expedition then proceeded to Khorāsān, handing over the princess not to Arghun, who had died, but to his son Maḥmūd Ghāzān. 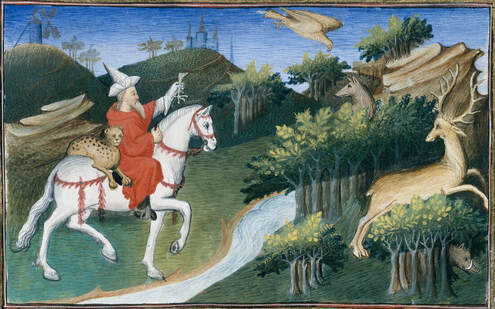 The Polos eventually departed for Europe, but as soon as they left the Mongol dominions and set foot in a Christian country, at Trebizond in what is now Turkey, they were robbed of most of their hard-won earnings. After further delays, they reached Constantinople and finally Venice in 1295.

Soon after his return to Venice, Polo was taken prisoner by the Genoese—great rivals of the Venetians at sea—during a skirmish or battle in the Mediterranean. He was then imprisoned in Genoa, where he had a felicitous encounter with a prisoner from Pisa, Rustichello (or Rusticiano), a fairly well-known writer of romances and a specialist in chivalry and its lore, then a fashionable subject. Polo may have intended to write about his 25 years in Asia but possibly did not feel sufficiently comfortable in either Venetian or Franco-Italian; however, with Rustichello at hand, the traveler began dictating his tale. The language employed was Franco-Italian—a strange composite tongue fashionable during the 13th and 14th centuries.
​
Polo was soon freed and returned to Venice. The remainder of his life can be reconstructed, in part, through the testimony of legal documents. He seems to have led a quiet existence, managing a not too conspicuous fortune and dying at age 70. A famous story relates how Polo was asked on his deathbed to retract the “fables” he had invented in his book; his answer was that he told barely half of what he actually experienced.