​Life of a legend.

Is this a dream, only a dream? Or just a memory from many lifetimes ago?

I awake with a start; bright sunlight burns my eyes.  My mouth is dry, and my head is pounding. I wipe my brow and feel dirt, grime, and cold sweat. I try to sit up, but I double over in pain. My hands reach for the wound in my stomach but find only sweat. I realize I am so hungry, my stomach is not wounded, only empty. I remember where I am and who I am.

I am Leonidas, son of King Anaxandridas II, I am nine years old and training to be a Spartan soldier. Alone, I camped under a rock overhang. My training demands that I endure a week in the wilderness with no supplies or food, relying instead on my skills and wits. Training began two years ago when the soldiers wrested me from the arms of my mother. I still see her face, her smile. She was so proud. But I am no different from other Spartan boys. Trained to show no pain, no retreat, and no surrender. Our lives are dedicated to being soldiers and our loyalty is to the state and to our brothers in arms, and to die in their defense is our ultimate glory.

Somehow, we fit other studies in our day. But nothing is as important as becoming a soldier. We study geography and learn about the many city-states that are loosely called Greece, though we are hardly kinsmen, for we are always at odds with those who should be brothers. The other cities have soldiers, but they are citizen soldiers who have other occupations and are not trained as we are. That makes them seem weak, and the ever-greedy superpower, Persia, knows it. They tried to invade once before, but our armies stopped them. But now they have a new king, the seven-foot-tall Xerxes, and a much larger army. Prophets warn us about another invasion, but our leaders take no heed. How could any army defeat a country so civilised? 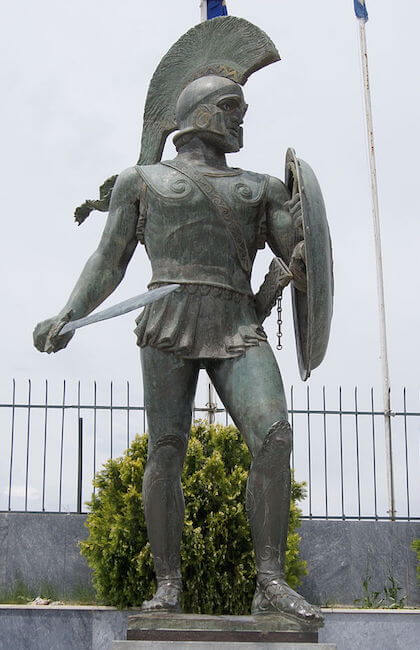 The prophecies came true a decade or so later. This time, Xerxes demanded Leonidas, then King Leonidas, to give up his arms. He famously replied,” Molon labe” (Come and take them.) Then he led an army of 6,000 or 7,000 against Xerxes and his much larger army, numbering more than 70,000.

Xerxes also had the Immortals, the best of the best, numbering 10,000 elite soldiers. They were trained from a young age to fight and kill, just like the Spartans. Not only were they highly trained, but their appearance was also meant to cause fear. Adorned with a thin scale of metal armor under embroidered tunics with sleeves and a soft felt hat, and to strike terror, an iron mask so their enemy couldn’t see their faces.

Leonidas led his force to the narrow pass at Thermopylae, also known as the Hot Gates, hoping to bottle-up the Persians there and use the terrain to offset their greater number.
It worked for three days until the Persians learned, from a Greek Citizen, another route around the pass. When Leonidas learned that they were betrayed and were going to be surrounded, he sent most of the army away. He stayed, along with 300 of his best soldiers, to cover the retreat.

The Spartans fought with fury and killed many Persians, but they were eventually overwhelmed by sheer numbers. Leonidas and all his 300 died.

While the Spartans were defeated, it bought time and marked the beginning of several important Greek victories against the Persians. It also boosted the morale of all the Greek city-states.

Leonidas entered myth and legend and a statue of him was erected at Thermopylae in 1955. The inscription under the statue reads, “Come and take them.”
​
Not just a dream, it’s a memory of a hero and legend, who lived long ago.
​