10 Things You Never Knew You Missed. 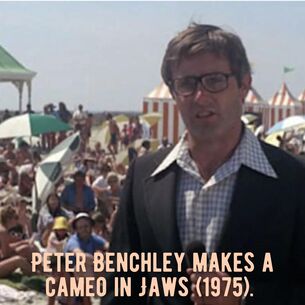 1:         The Shark Is Never Referred To As Jaws …Despite being the title of the film, the shark is never called Jaws. Hooper (Richard Dreyfuss) does discuss the size of the shark's jaws and even measures the jaws of the tiger shark, but most of the time the shark in the film is simply referred to as "the shark," and never Jaws.

2:         Like its apparent name… There aren't a lot of "jaws" in Jaws. The shark doesn’t fully appear in a shot until 1 hour and 21 minutes into the two-hour film. The reason it isn’t shown is because the mechanical shark that was built rarely worked during filming, so Spielberg had to create inventive ways (like Quint’s yellow barrels) to shoot around the non-functional shark. The shark weighed more than a ton.

3:         Writer Peter Benchley Cameos In The Film… Before it was a movie, Jaws was a best-selling book by Peter Benchley. Published in 1974, Benchley claimed the inspiration for the story came from a newspaper clipping about a fisherman who caught a massive great white shark in New York. In addition to being credited for the film's script along with Carl Gottlieb, Benchley cameos in the film as a local news reporter on the beach. 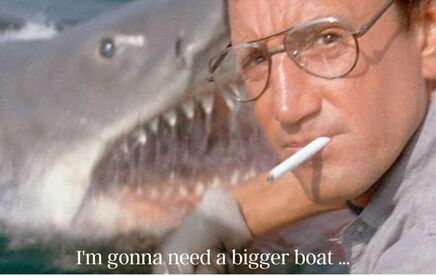 4:         Quint Sings A Song From Moby Dick… Quint (Robert Shaw) repeatedly sings the old British naval song "Spanish Ladies". It’s also sung by the crew in Herman Melville's classic book Moby Dick. In fact, Quint is similar to the classic's Captain Ahab. Quint is obsessed with killing sharks, while Ahab is obsessed with killing the whale. Both men are motivated by revenge, and both are killed by the creatures they despite.

​5:         The License Plate In The Tiger Shark References James Bond… When Hooper and Brody (Roy Schieder) decide to cut open the tiger shark's digestive tract to determine if it was the shark which killed Alex Kitner, Hooper pulls out a license plate and tosses it over to Brody. The first three digits of the plate are 007. 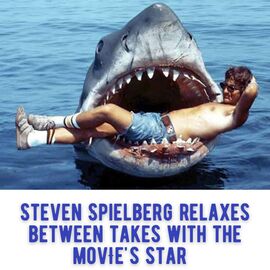 6:         Gregory Peck forced a scene to be cut from Jaws… In early drafts of the screenplay, Quint was originally introduced while causing a disturbance in a movie theatre while watching John Huston’s 1958 adaptation of Moby Dick. The scene was shot, but actor Gregory Peck—who plays Captain Ahab in that movie—owned the rights to the film version of Moby Dick and wouldn’t let the filmmakers on Jaws use the footage, so the sequence was cut.

​7:         Jaws’ Amity Island was actually Martha's Vineyard… To create the fictional town of Amity, the production shot on location in Edgartown and Menemsha on Martha’s Vineyard in Massachusetts. Strict land ordinances kept the production from building anywhere—Quint’s shack was the one and only set built for the movie, while the defaced Amity Island billboard had to be constructed and taken down all in one day. 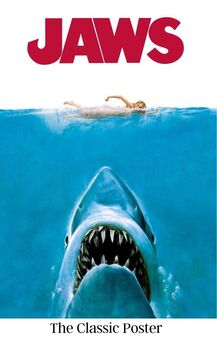 8:         Jaws’ poster image came about by chance… The film’s iconic poster image was designed by artist Roger Kastel for the paperback edition of Benchley’s book. Kastel modelled the image of the massive shark emerging from the bottom of the frame after a great white shark diorama at the American Museum of Natural History. The female swimmer at the top was actually a model that Kastel was sketching at his studio for an ad in Good Housekeeping. He asked her to stay an extra half-hour and had her pose for the image by standing on a stool and pretending to swim.

9:         A Real Shark Attacked The Shark Cage… While a mechanical shark was used for most of the film's shark attack scenes, the footage of the shark destroying Hooper's shark cage was real, as was the shot of the shark with a rope in his mouth. This footage was captured by Ron and Valerie Taylor along with shark expert Rodney Fox. In order to make the actual shark look as large as the monstrous shark from the film, they used a smaller cage and both a little person and a dummy in the place of Hooper.
​
10:       The Dates Of The Shark Deaths Are Out Of Order… Brody types July 1 as his report of Chrissie Watkins death towards the beginning of the film, however, the reward poster for killing the shark which killed Alex Kitner claims he was killed on June 29. This is clearly an error since Alex Kitner's death took place after Chrissie Watkins and not before.