The evolution of Philippine fashion

Quite predictably, the Filipino style of clothing had been influenced by the climate in the Philippines. The earliest documentation of native clothing begins with the ‘Archaic epoch’ (10th – 16th century) before colonizers from Europe reached the islands. 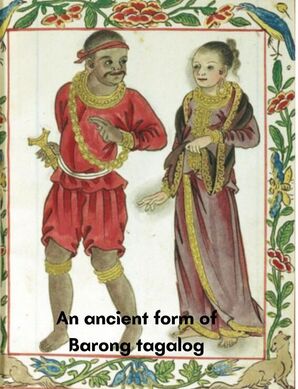 The tropical climate (dry and rainy seasons) dictated pants or a loincloth for men and cool, robe-like dresses for women. These early Filipinos – as well as the still extant tribal groups – wore colourful woven clothes, often with intricate beadwork and other ornaments.

Prior to the first Spanish Era (1521–1799), the early pre-colonial clothing of groups such as the Tagalogs (the first settlers of Manila) and Visayans (native to the Visayas, the southernmost islands of Luzon) included both the baro and saya made from silk in matching colours.

​This style was exclusively worn by the women from the upper caste, while those of lower castes wore baro made from pounded white bark fibre, and a floor-length wrap-around skirt. Women usually wore jewellery, such as gold necklaces and earrings, which symbolized wealth and beauty. In some tribes, women also wore tattoos signifying beauty, power and wealth. 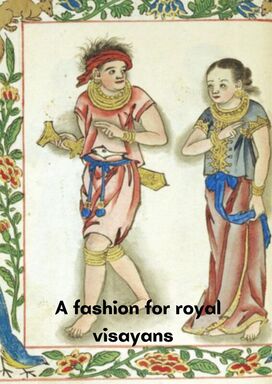 In contrast, the Visayans wore clothes similar to that of Indonesians and Malaysians. They wore a robe called Marlota or jacket called Baquero without a collar that reached the feet. The robes or jackets were brightly coloured. The Tagalogs and the Visayans bound their foreheads and temples with long, narrow strips of cloth called Putong. Necks were covered with gold necklaces, and wrists with golden armlets called Calombigas – these had intricate patterns.

The usual male headdress was the pudong, a turban; though in Panay, both men and women also wore a head cloth or bandana called saplung. Commoners wore pudong of rough abaca cloth wrapped around only a few turns so that it was more of a headband than a turban and was therefore called pudong-pudong – as the crowns and diadems on Christian images were later called. A red pudong was called magalong and was the insignia of braves who had killed an enemy.

When the Spaniards came and settled in the country, the fashion changed drastically as the Spanish culture influenced the succeeding centuries of Philippine history. The Spanish dissolved the kingdoms and united the country, resulting in a mixture of cultures from different ethnic groups and Spanish culture.

Throughout the 16th century up to the 18th century, women wore a Hispanicised version of the Baro't saya, composed of a bodice – called a camisa, often made in pineapple fibre or muslin – and a floor length skirt, while the men wore the Barong Tagalog, a collared and buttoned lace shirt or a suit.
​
The ‘second’ Spanish Era began in 1800–1899 and went through until 1899 when Americans arrived. The continuing influence of the Western culture, the rising economy, globalization, and exposure from the European fashion scene caused women's clothing to change and by the 1850s, women's clothing was now full wide skirts that usually had a long train rather than the simple floor length skirts, a bodice called camisa which means blouse in English and a panuelo, a big square cloth folded triangularly and worn in the Philippines like a great ruffle or collar. The attire is composed of four pieces, namely the camisa, the saya, the pañuelo (a scarf, also spelled panuelo) and the tapis.

Going to church or attending mass, called for the women to wear a veil above their heads, similar to other Catholic countries at that time.

The women wore this kind of fashion even when the Spanish Regime was finally overthrown and was replaced by the First Philippine Republic. Today, this type of clothing is now called as the "Maria Clara" dress, named after the character of Maria Clara from Dr. Jose Rizal's novel Noli Me Tangere who became a symbol of the traditional Filipino woman, known as modest, elegant and conservative. 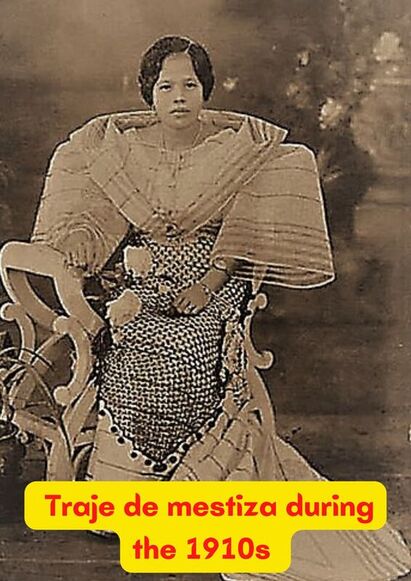 When the Americans came in the early 1900s, the fashion remained the same for the first five years. Women then wore the Traje de Mestiza, the more modern version of the Maria Clara; it had bigger sleeves and a narrower floor length skirt with a long train called saya de cola and replaced the full wide skirt reflecting the Edwardian Fashion of the West.

By the 1920s, the style of the skirt still remained, influenced by the flapper dress; however, the wide sleeves had been flattened to butterfly sleeves (popularized by local couturier Pacita Longos), and the big pañuelo reduced its size. Such trends had gained prominence especially during the annual Manila Carnivals of the 1920s and through the 1930s, when young adult women and children finally abandoned the typical "Traje de Mestiza" as everyday wear and started to wear floral printed dresses with mid-calf length shirts. Though many women embraced the western ideals, the typical "Traje de Mestiza" was not fully gone. The elders and middle-aged women still wore the traditional dress while the young adults considered it only as a formal dress for events sucas carnivals, galas, etc.

In the 1930s, the Philippines was famous for its beauty pageants and carnivals that drew tourists from around the world and resulted in influencing the fashion and beauty standards of the Filipino women.

When the 1940s came, the Philippines saw the breaking out of World War II resulting in the shortage of tailoring shops, clothing boutiques and dressmaking factories as the country was occupied by the Japanese Empire. The austerity era started when rations were implemented, and women wore simpler clothing. The terno gradually disappeared and stopped being manufactured. Clothing boutiques only sold monochromatic dresses, mostly in dark tones and the shirtwaist dresses of the previous decade became popular in the 1940s with a simpler look.

During the mid-1940s, the clothing boutiques, tailoring shops, and dressmakers stopped operation as the final chapter of the World War II occurred in the Philippines. The capital city of Manila was bombed and was left 80% destroyed and was considered being the second most devastated capital city in World War II, next only to Warsaw.

After the war, most of the people either lost their clothes or could not find new clothes. In 1946, the country began its reparation and Manila's restoration. However, the lack of dressmakers made the fashion of the 1930s and early 1940s remain popular for the rest of the decade.

When the next decade started, the country saw the rise of economy, once again giving opportunities for people to have more necessities and live a normal life. Women remained wearing the 1940s fashion during the first five years of the decade, but by the late 1950s, started to wear dresses and with floral prints and fuller knee-length skirts. The style was inspired by Christian Dior's "New Look" collection, characterized by a below-mid-calf length, full-skirt, pointed bust, small waist, and rounded shoulder line. 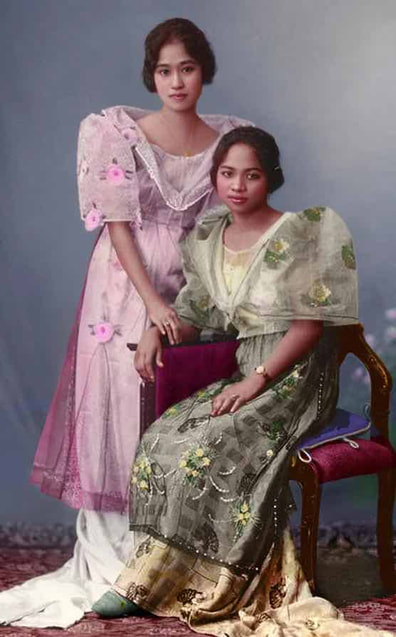 The Barong Tagalog became popular once again to be worn as a formal wear, popularized by the then-President Ramon Magsaysay. The Terno was rarely worn by young women every day; however, it was still worn at formal events such as galas, national events, government parties and film festivals.

With the popularity of the hippie culture in the late 1960s, many Filipinos embraced this culture which has continued until the early seventies. At the same time, the rise of Filipino Nationalism began and both movements influenced the way people lived and dressed. The early 1970s saw women start to abandon mini dresses for a more modest clothing such as maxi skirts. Vintage clothing from the Victorian Era of the west also became popular as long sleeves, laces, and collars became popular in dresses. Bell bottom pants started to become popular that would continue to the rest of the decade. Men also started to grow their hair long, the first time ever that such style became acceptable in post-colonial Filipino society.

Following the 1986 People Power EDSA Revolution, Corazon Aquino became the 11th President of the Philippines and spanned a six-year period from February 25, 1986, to June 30, 1992. Aquino's relatively peaceful ascension to the Philippine presidency signalled the end of authoritarian rule of Ferdinand Marcos in the Philippines and drew her and the Filipino people international acclaim and admiration. Corazon Aquino favoured western style power dressing and the simpler and more modest kimona in place of the terno.

By 1989, a drastic change in style emerged; a trend having oversized shirts and pants were in style, paving way to the 1990s loose fashion.
​
1990s fashion remained popular during the early years of the first decade of the 21st century. 2000s fashion was considered a mash up of different styles. The development of social media saw many Filipino women and men exposed to a new world of styles and due to the rising economy of the country, many Filipinos began buying more clothes. By the mid-2010s, many of the fashions from the mid-1960s and mid-1990s returned, clothing such as midi-skirts, denim jackets, knitted sweaters, boat shoes, etc. came back into fashion while fashion pieces like chokers gained prominence once again. Men's fashion also started to move away to the rock/hip-hop-influenced styles of the past two decades and started to define a new style for men. 2010s hairstyles were often defined by loose waves for women and slick-back hair for men. While beauty trends include having emphasis on the lips, and contoured cheeks, nude colour palettes were also prominent for make-up.

The late 2010s saw Mindanao-influenced designs, and a resurgence of interest for ternos and their redesigns for modern applications.
Throughout every era, the Philippine national costume never lost its place despite the influence from different countries. It is truly remarkable, undoubtedly unique, colourful, and ornate with bits and pieces from the natural resources found in the land itself.

According to an article by the NationalClothing.org, the main factors that formed traditional clothing of the Philippines are climate, cultural traditions, foreign conquerors, and way of living.

FILIPINO MEN’S NATIONAL COSTUME
Originating from the northern part of the Philippines, Barong Tagalog is the official national costume of Filipino men. It is worn over a Chinese collarless shirt called camisa de Chino. Its loose and long lines feature can be traced of its Chinese sources, the airy tropical appearance of Indo-Malay costume, the elongated effect of Hindu dressing, and the ornamental restraint of European men’s clothing. The fabric used is usually made of different natural resources such as piña fabric (hand-woven from pineapple leaves), jusi fabric (machine-woven from banana silk), and banana fabric (hand-woven from banana fiber).

FILIPINO WOMEN’S NATIONAL COSTUME
The official national costume of Filipina women is called Baro at Saya (Baro’t Saya), also known as Filipiniana. It features a floor-length panelled skirt of silk or satin, and it consists of four separate pieces: the collarless waist-length, bell sleeved camisa; the bubble-shaped, floor-length saya; the stiff, neck-covering pañuelo; and the hip-hugging, knee length tapis or overskirt. Another popular kind is the Mestiza Dress, a formal dress made of expensive lace and fabric adorned with embroideries. Popularized by the Philippine First Lady Imelda Marcos, some even called it Imelda dress or terno (matching) Mestiza dress is known for its elegance and butterfly sleeves.