The weird and wonderful world of Christmas.

It’s the most wonderful time of the year. For a couple of weeks,
the world takes on a magic glow and people seem merrier.
Whether you’re celebrating a religious festival, like Hanukkah or Christmas, or a more secular occasion, you’re sure to have your own selection of rituals or customs that make the holiday season so special. Here’s a selection of weird and wonderful ways Christmas traditions are celebrated loudly and proudly around the world. 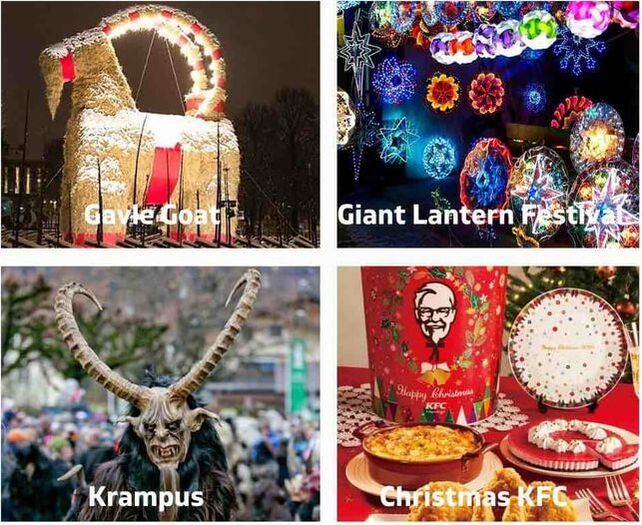 Gävle Goat, Sweden
Since 1966, a 13-metre-tall Yule Goat has been built in the centre of Gävle’s Castle Square for Advent. But this Swedish Christmas tradition has unwittingly led to another “tradition” of sorts – people trying to burn it down. Since 1966 the Goat has been successfully burned down 29 times – the most recent destruction was in 2016.

If you want to see how the Goat fares this year, you can follow its progress on the Visit Gävle website through a live video stream which goes up on December 1st.

Giant Lantern Festival, Philippines
The Giant Lantern Festival (Ligligan Parul Sampernandu) is held each year on the Saturday before Christmas Eve in the city of San Fernando – the “Christmas Capital of the Philippines.” The festival attracts spectators from all over the country and across the globe. Eleven barangays (villages) take part in the festival and competition is fierce as everyone pitches in trying to build the most elaborate lantern. Originally, the lanterns were simple creations around half a metre in diameter, made from ‘papel de hapon’ (Japanese origami paper) and lit by candle. Today, the lanterns are made from a variety of materials and have grown to around six metres in size. They are illuminated by electric bulbs that sparkle in a kaleidoscope of patterns.

​Krampus, Austria
A beast-like demon creature that roams city streets frightening kids and punishing the bad ones? Nope, this isn’t Halloween, but St. Nicholas’ evil accomplice, Krampus. In Austrian tradition, St. Nicholas rewards nice little boys and girls, while Krampus is said to capture the naughtiest children and whisk them away in his sack. In the first week of December, young men dress up as the Krampus (especially on the eve of St. Nicholas Day) frightening children with clattering chains and bells.

Kentucky Fried Christmas Dinner, Japan
Christmas has never been a big deal in Japan. Aside from a few small, secular traditions such as gift-giving and light displays, Christmas remains largely a novelty in the country. However, a new, quirky “tradition” has emerged in recent years – a Christmas Day feast of the Colonel’s very own Kentucky Fried Chicken.
​
The festive menu will soon be advertised on the KFC Japan website and, even if you don’t understand Japanese, the pictures sure will look delicious with everything from a Christmas-themed standard bucket to a premium roast-bird feast. ​ 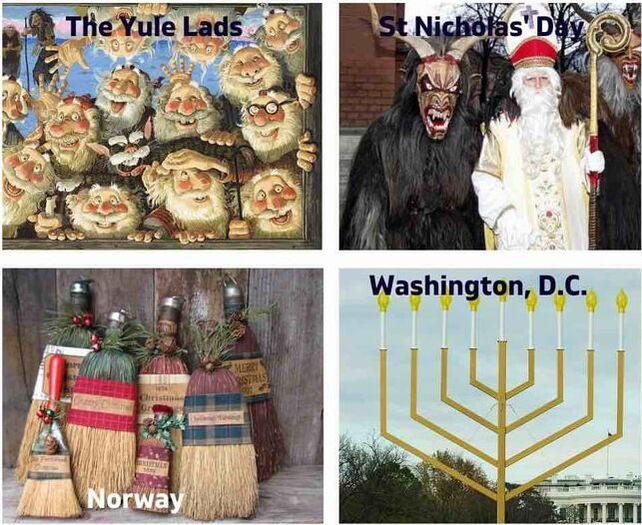 The Yule Lads, Iceland
In the 13 days leading up to Christmas, 13 tricksy troll-like characters come out to play in Iceland. The Yule Lads (jólasveinarnir or jólasveinar in Icelandic) visit children each night of Yuletide. Children place their best shoes by the window and a different Yule Lad visits leaving gifts for nice girls and boys and rotting potatoes for the naughty ones.

​Saint Nicholas’ Day, Germany
Not to be confused with Weihnachtsmann (Father Christmas), Nikolaus travels by donkey in the middle of the night on December 6 (Nikolaus Tag) and leaves little treats like coins, chocolate, oranges and toys in the shoes of good children all over Germany, and particularly in the Bavarian region. St. Nicholas also visits children in schools or at home and in exchange for sweets or a small present each child must recite a poem, sing a song or draw a picture. In short, he’s a great guy, but it isn’t always fun and games. St. Nick often brings along Knecht Ruprecht (Farmhand Rupert), a devil-like character with a dirty beard dressed in dark clothes covered with bells. Knecht Ruprecht carries a stick or a small whip  to punish any children who misbehave.

​Norway
Perhaps one of the most unorthodox Christmas Eve traditions can be found in Norway, where people hide their brooms. It’s a tradition that dates back centuries to when people believed that witches and evil spirits came out on Christmas Eve looking for brooms to ride on. To this day, many people still hide their brooms in the safest place in the house to stop them from being stolen.

​Lighting of National Hanukkah Menorah, Washington, D.C. – US
The Jewish holiday of Hanukkah is celebrated with much fanfare across the United States with one of the most elaborate events taking place on a national stage. Since 1979, a giant nine-metre Menorah has been raised on the White House grounds for the eight days and nights of Hanukkah. The ceremony in Washington, D.C. is marked with speeches, music, activities for kids, and, of course, the lighting of the Menorah.

The lighting of the first candle at the White House takes place at sunset on the 25th day of the month of Kislev according to the Jewish lunar calendar., rain or shine, and an additional candle is lit each successive night. The event is free to attend, but tickets must be booked in advance. ​ 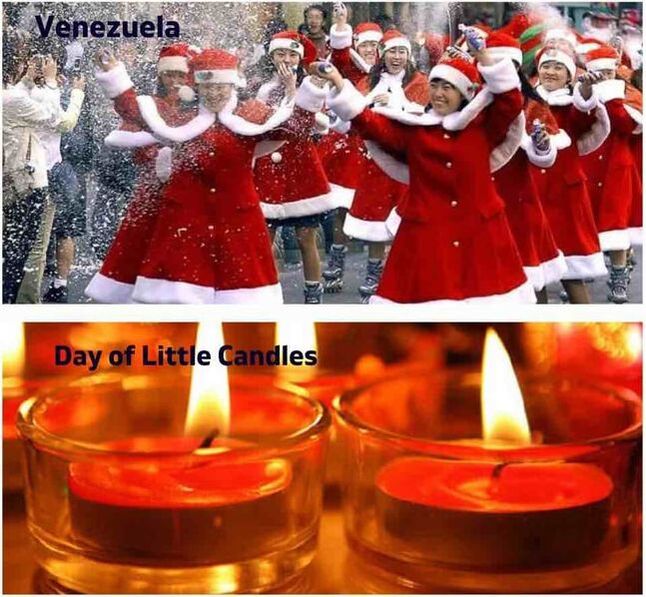 Venezuela
Love Christmas, but think it could be improved by a spot of rollerblading? If the answer is yes, visit Caracas, Venezuela.

Every Christmas Eve, the city’s residents head to church in the early morning – so far, so normal – but, for reasons known only to them, they do so on roller skates. This unique tradition is so popular that roads across the city are closed to cars so that people can skate to church in safety, before heading home for the less-than-traditional Christmas dinner of ‘tamales’ (a wrap made from cornmeal dough and stuffed with meat, then steamed).

​Day of the Little Candles, Colombia
Little Candles’ Day (Día de las Velitas) marks the start of the Christmas season across Colombia. In honour of the Virgin Mary and the Immaculate Conception, people place candles and paper lanterns in their windows, balconies and front yards. The tradition of candles has grown, and now entire towns and cities across the country are lit up with elaborate displays. Some of the best are found in Quimbaya, where neighbourhoods compete to see who can create the most impressive arrangement. ​