This article was going to begin with a quote from a recent advertorial in Spice magazine (Issue 91- Summer – 2020) which states that ‘As evidenced by the extremely effective response to the COVID-19 pandemic, South Korea is presently the world’s safest, most efficient and innovative place for business conventions combined with rest amid beautiful nature’.
However, having woken just this morning (Dec 26th, 2020) to the news that South Korea is battling the largest surge of COVID-19 infections since the pandemic began, I guess that like the rest of the world that has experienced second and third waves, it’s back to reworking a possible travel itinerary and turning into a post-COVID bucket list. A review of recommendations from conference organisers, travel experts and tourists has resulted in this top ten destinations to make you fall in love with South Korea. For many, they will help your search of the roots of Hallyu – the Korean 'wave' and the Korean 'spirit'. Korean arts and culture of today originate from the country’s unique traditions and cultural heritage. 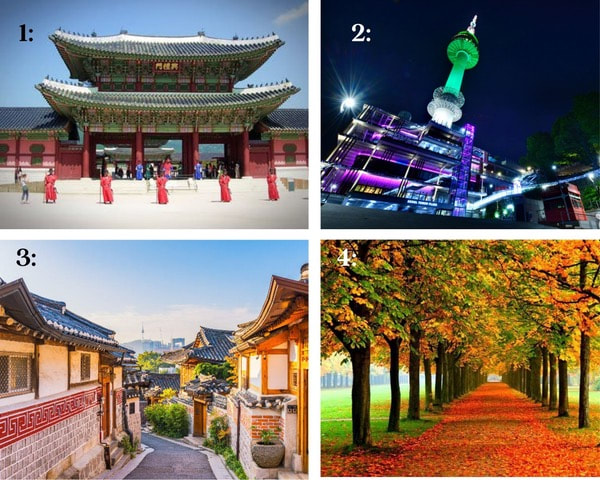 1: Gyeongbokgung Palace Gyeongbokgung Palace was the main legal residence of the royal family during the Joseon dynasty (1392 – 1910). Carrying the meaning of “a place where the new king can enjoy prosperity of great blessings,” this was the first palace built during the dynasty. The palace is unique for its layout of buildings over a vast area and is the only palace to have all four major gates still remaining to this day.

Within the palace grounds, you can see a multitude of restored buildings; each with distinct variations and each serving a unique purpose. The Royal Guard Changing Ceremony is a must to see and the Palace also offers special evening admissions from time to time, so don’t miss the opportunity to enjoy the evening atmosphere when you’re planning your visit.

2:  Namsan Seoul Tower
Seoul’s landmark attraction, Namsan Seoul Tower is located atop Namsan Mountain in the centre of the city. The tower draws many thousands of visitors year-round and is most famous for its nightscape view of the city. For hallyu fans, the tower is a must-visit attraction, having been featured in dramas like “My Love From the Star (2013)” and “Legend of the Blue Sea (2016).”
The tower features not only an observation deck, but also atmospheric cafés and restaurants among other facilities.

3:  Bukchon Hanok Village
A hanok (Korean: 한옥, 韓屋) is a traditional Korean house. They were first designed and built in the 14th century during the Joseon Dynasty.
Korean architecture considers the positioning of the house in relation to its surroundings, with thought given to the land and seasons. The interior of the house is also planned accordingly. A representative attraction of Seoul, Bukchon Hanok Village shows the hanok’s charm of Korea’s traditional buildings. Previously being the neighbourhood where relatives of the royal family lived, the hanok here are grand, providing beautiful scenes down every lane. To make the most of the area, it’s worth finding the “Eight Scenic Spots of Bukchon.” These eight locations are each unique but share the similarity of offering breathtaking views.

4: Namiseom Island
Namiseom Island became a popular tourist attraction after appearing in the Korean drama “Winter Sonata (2002).” Originally just a hilltop, Namiseom Island became an island with the construction of Cheongpyeong Dam, which elevated the surrounding water level. The island is rather small, allowing visitors to complete a full tour within half a day. The island’s effort to preserve nature and reuse recyclable items is quite noteworthy.

'5:  Lotte World
There aren’t many people who don’t find some fun at and amusement park – no matter what their age. Lotte World is open all year round, filled with dynamic events and performances. Even better, the park is located in downtown Seoul and is easily accessible via public transportation. The park is largely divided into two areas: 'Adventure' located indoors, and the outdoor section of 'Magic Island'. Adventure offers a plethora of attractions, including a carousel, Spanish pirate ship, flume ride and more, while Magic Island has big thrill rides like the Gyro Drop and Gyro Spin. Lotte World Tower Seoul Sky and Lotte World Shopping Mall are located nearby so make sure to take a look around while you’re here.

6:  Changdeokgung Palace and Huwon
Changdeokgung Palace was built in the early Joseon period and, of all the palaces, served as the royal residence the most. The palace boasts a majestic harmony with the surrounding nature as each building was built with careful consideration of geographical and environmental features within the area. In particular, the matching beauty of the palace’s pavilions, ponds and rock formations is quite a scene to behold. Changdeokgung Palace’s magnificence was recognized internationally and became designated as a UNESCO World Heritage in 1997.

7:  Hongdae A cultural hub of youthful energy, Hongdae refers to the area near Hongik Univ. Station (Seoul Subway Line 2). Streets lined with cafés, restaurants, bars, and shops are filled with youth and the region is full of exciting vibes given off by live cafés and clubs clustered within. Its influence has recently expanded to include Yeongnam-dong’s Gyeongui Line Forest Park, providing visitors with a relaxing walking path and unique shops inside the urban neighbourhood. Many tourist attractions including Trick Eye Museum and KT&G Sangsangmadang are also located here.

8:  Insa-dong
Insa-dong is often referred to as the “Street of Traditional Korean Culture.” The main thoroughfare is lined with shops selling traditional crafts and souvenirs, while the many side-streets feature restaurants and cafés serving traditional foods and teas in hanok buildings. There is an endless number of things to see here, but Ssamzigil tops the list. The structure of the building itself is unique, built in a square shape symbolic of the Korean letter ‘ㅁ’ with a single continuing pathway slowly winding up the building from the basement level to the fourth floor. Along the path, you can see art galleries, shops selling traditional handicrafts, furniture, and more. The fourth floor opens up into a sky garden which offers a bird’s-eye-view of the streets of Insa-dong. 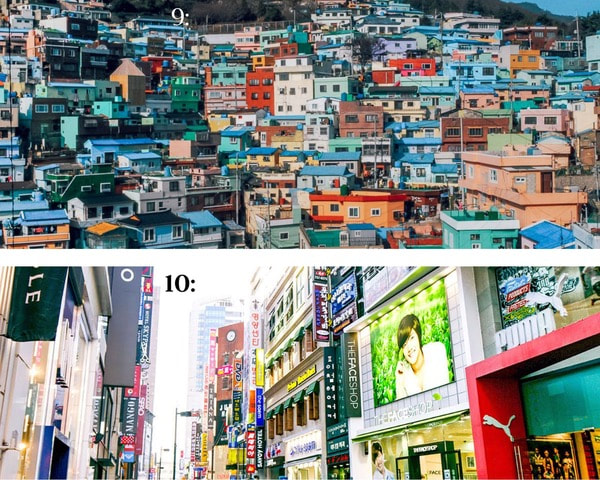 9:  Busan Gamcheon Culture Village
Gamcheon Culture Village is built in a stair-step fashion on the side of a hill in Busan and is often called the “Santorini of Korea.” The narrow alleys hug the curves of the hillside with random twists and turns taking you further into the village, leading many to refer to the streets as a maze. The entire village is a kaleidoscope of colour with bright murals decorating the houses and alleyways, with every spot being perfect for photos. The most popular is with the statue of The Little Prince, looking out over the village below. Every year in April, the village hosts a variety of culture and art programs during the Gamcheon Culture Village Alley Festival.

10:  Myeong-dong
​The area of Myeong-dong is filled with unique street foods and plenty of things to see! A district of fashion and shopping, many young Koreans and international tourists seek out great deals and the latest trends. Myeong-dong stretches for approximately 1 kilometre from Myeong-dong Station (Seoul Subway Line 4) to Eulji-ro Avenue and Lotte Department Store. The streets are lined with department stores, duty free stores, and various brand shops. Even if shopping isn’t really your thing, you can still enjoy Myeong-dong by trying out the street foods and many famous restaurants in the area.