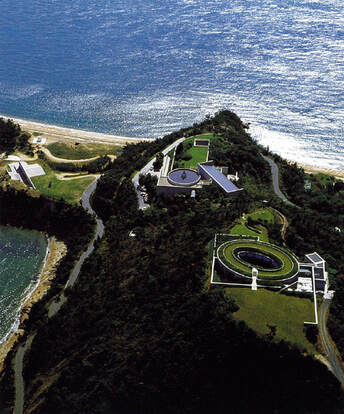 Bennesse House Museum
Naoshima is probably the best-known island in the area, a tiny landmass with a population of 2,000 – 3,000 yet host to more than 200,000 visitors per year who want to see its modern art museums, architecture and sculptures. Part of Kagawa Prefecture, the island with its Mediterranean atmosphere, sandy beaches and sunny weather, combined with a laid back, rural feel is a relaxing getaway from Japan's large urban areas such as Tokyo and Osaka.
The island’s art history begins around 1960 when the mayor collaborated with publishing billionaire Tetsuhiko Fukutake to make it an international resort for school children and arrest the island’s decline from the demise of its industrial heyday. They built a camping ground with large ‘yurts’ on a long beach at the southern end of the island.
​
When Testuhiko died, his son Soichiro Fukutake set up the Benesse Foundation to continue the work. Soichiro began exploring the smaller islands of the Seto Inland Sea, the body of water that separates three of Japan’s four main islands. He wanted to transform three islands that had borne more than their fair share of the country’s rapid industrialisation – refineries were built on Naoshima and Inujima, and illegal waste was dumped on Teshima – and had then been forgotten. 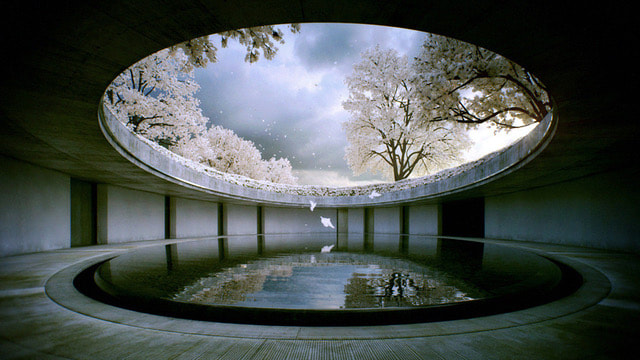 The occulus of the Benesse Museum
He decided to do it through contemporary art, and persuaded architect Tadao Ando, aka “the king of concrete”, to collaborate on Benesse House Museum on Naoshima. The museum signalled the scale of Fukutake’s vision, which went beyond economic reboot to create a utopia showcasing not only world-class art but also a simpler, slower way of life, far removed from “monstrous cities”.

High on a hill overlooking the sea, the museum is filled with modern art greats: Andy Warhol, David Hockney, Jean-Michel Basquiat and Cy Twombly, but its most iconic piece is on the beach below: a giant yellow pumpkin by Japanese pop artist Yayoi Kusama, a surreal beacon jutting out into the sea. Another red pumpkin greets visitors as they disembark at the harbour – even the Naoshima ferry bears Kusama’s signature motif of dots. It’s close to the wacky I Love Yu public bathhouse, “I♥YU”  a collage of junkyard scrap and neon signs. 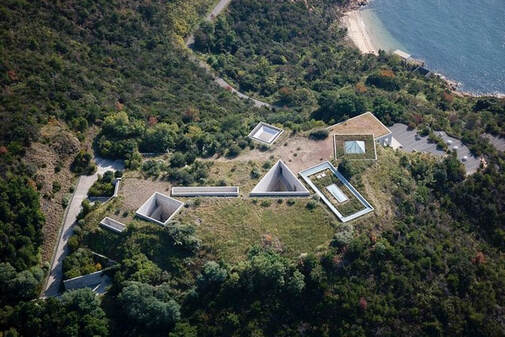 And it’s not the only arty attraction in the area. This is one of 18 museums, galleries, installations and projects across three islands that together form a unique rural art paradise.

Ando went on to create more architectural masterpieces and ‘art house projects’ including Chichu Art Museum, a set of interlinked, half-buried buildings that house Fukutake’s personal collection of five Monet water lily paintings. Ando designed the underground building to let in an abundance of natural light that alters the appearance of the artwork it houses throughout the day. For many, the Walter de Maria room, a temple-like space with golden pillars mounted on the walls and steps leading up to a giant granite sphere are the most striking attraction.
The Museum itself is reason alone to visit, but the island is also home to several other highlights, including the Teshima Yokoo House and Christian Boltanski’s “Les Archives du Cœur”. The artist has recorded thousands of heartbeats from people all over the world. In a tunnel on one side is a wall of speakers playing a random person's heartbeat, in which a light flickers in sync. There is a recording studio where you can add your own heartbeat to the collection! Tadanori Yokoo, wanted to create a space that showed the line between life and death. Utilizing coloured glass, you’re able to view the world from different angles and the transitions between them.
​