A staple trope of gangster movies, the numbers racket fleeced millions from the urban poor eager to strike it rich. 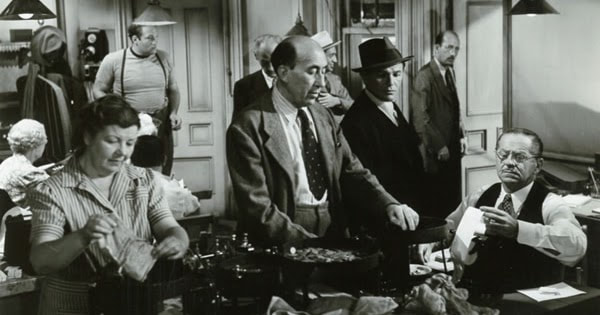 The numbers game, also known as the numbers racket, the Italian lottery, or the daily number, is a form of illegal gambling or illegal lottery played mostly in poor and working class neighbourhoods in the United States, wherein a bettor attempts to pick three digits to match those that will be randomly drawn the following day.

For many years the "number" has been the last three digits of "the handle", the amount race track bettors placed on race day at a major racetrack, published in racing journals and major newspapers in New York.

Gamblers place bets with a bookmaker or at a tavern, bar, barber shop, social club, or any other semi-private place that acts as an illegal betting parlour. Runners carry the money and betting slips between the betting parlours and the headquarters, called a numbers bank.

"Policy shops", where bettors choose numbers, operated in the United States prior to 1860. In 1875, a report of a select committee of the New York State Assembly stated that "the lowest, meanest, worst form ... [that] gambling takes in the city of New York, is what is known as policy playing." It flourished especially in working class African American and Italian American communities across the country, though it was also played to a lesser extent in many working class Irish-American and Jewish-American communities. It was known in Cuban-American communities as bolita ("little ball").

Other sources date the origin of Policy, at least in its most well-known form, to 1885 in Chicago. During part of its run from 1868 to 1892, the Louisiana Lottery involved drawing several numbers from 1 to 78, and people wagering would choose their own numbers on which to place a bet.

By the early 20th century, the game was associated with poor and working-class communities, as it could be played for as little as a penny. Also, unlike state lotteries, bookies could extend credit to the bettors and policy winners could avoid paying income tax. Different policy banks would offer different rates, although a payoff of 600 to 1 was typical. Since the odds of winning were 999:1 against the bettors, the expected profit for racketeers was enormous.

Boston
In Boston (as well as elsewhere in the northeast), the game was immensely popular in black neighborhoods. The number was based on the handle from the early races at Suffolk Downs or, if Suffolk was closed, one of the racetracks in New York. The winner could be controlled by manipulating the handle.

After Jerry Angiulo became head of the Mafia in Boston, in 1950, he established a profit sharing plan whereby for every four numbers one of his runners turned in, they would get one for free. This resulted in the numbers game's taking off in Boston. According to Howie Carr, The Boston American was able to stay in business in part because it published the daily number.

Around the same time, Buddy McLean began forming a gang in Somerville, Massachusetts to run numbers. This would become the Winter Hill Gang. By the 1970s, the Winter Hill Gang, then led by Whitey Bulger, moved bookies under its protection away from the numbers game to sports betting, as the state was starting its own lottery, and the National Football League did not allow betting on its games outside of Nevada; thereby Massachusetts could not compete with them. Despite the creation of the state lottery, however, the numbers game's demise in Massachusetts was not immediate, as the state lottery had a lower payout and was taxed.

Chicago
In the 1940s, Eddie Jones and his brothers earned more than $180,000 per week in the black community. While in jail for income tax evasion, Jones became acquainted with Sam Giancana, a hit-man for hire among top Italian Mafia figures. Back on the streets, the men became friends. Eddie taught Sam everything he knew about the policy game and how to memorize number combinations, and even hired Sam to operate one of his many lucrative establishments.

Sam made his first fortune through Eddie. Aspiring to become a "made man", Sam shared his new knowledge of the policy game with the Dons, who were impressed. By then, the Italian Mafia focused their attention on the Jones market in the black community.

Under orders from the Dons, Sam was instructed to remove Jones from his lucrative position and take over. To avoid being murdered by the mob, Jones walked away from his family enterprise.

Detroit
A 1941 trial exposed Detroit's extensive numbers operations. Among the policy houses operating were "Big Four Mutuale" (owned by John Roxborough, boxer Joe Louis's manager), "Yellow Dog" (owned by Everett Watson), "Tia Juana", "Interstate", "Mexico and Villa" (operated by Louis Weisberg), "New York", "Michigan", and others. Big Four was said in testimony to be doing $800,000 business a year, with profits of up to $6000 a week. Yellow Dog was said to be doing $4,900 daily in business, totalling $1.5 million a year. The grand jury in the trial of 71 defendants charged that 10 policy houses had been paying $600 a month in payoffs equally divided between the chief of police, the head prosecutor and the mayor, with smaller bribes in the $25 to $50 range going to individual police sergeants and lieutenants. Former mayor Richard Reading was said to have received $18,000 in payoffs. Reading, Roxborough, Watson, and several others were convicted on conspiracy charges, with Roxborough receiving a ​2 1⁄2- to 5-year sentence, and Reading sentenced to 4-5 years.

New York City
The Italian lottery was operated as a racket for the American Mafia, originally in Italian-American neighbourhoods such as Little Italy, Manhattan and Italian Harlem, by mobsters of the Morello crime family. A young Joseph Bonanno, future boss of the Bonanno crime family, expanded the Italian lottery operation to all of Brooklyn and invested the profits in many legitimate businesses.

In the 1930s, Vito Genovese, boss of the Genovese crime family, ruled the Italian lottery in New York and New Jersey. Bringing in over $1 million per year, he owned four Greenwich Village night clubs, a dog track in Virginia, and other legitimate businesses.

Dutch Schultz is said to have rigged this system, thanks to an idea from Otto Berman, by betting heavily on certain races to change the Win, Place and Show numbers that determine the winning lottery number. This allegedly added ten percent to the Mob take.