"The Stuff that Dreams are made of..."
​Sam Spade, The Maltese Falcon 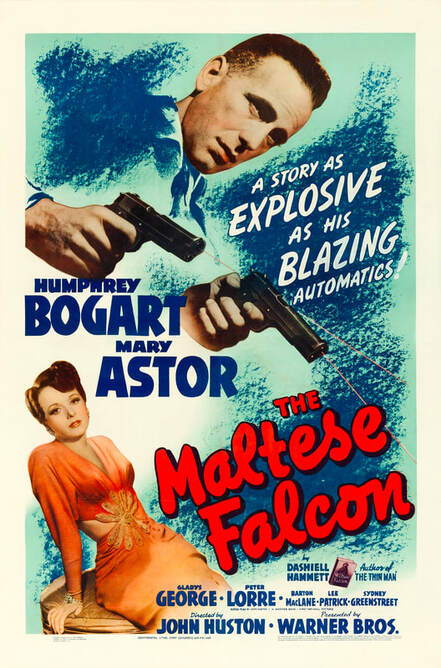 The Maltese Falcon is a 1941 American film noir written and directed by John Huston in his directorial debut, based on the 1930 novel of the same name by Dashiell Hammett and indebted to the 1931 movie of the same name. It stars Humphrey Bogart as private investigator Sam Spade and Mary Astor as his femme fatale client. Gladys George, Peter Lorre and Sydney Greenstreet co-star, with the last appearing in his film debut. The story follows a San Francisco private detective and his dealings with three unscrupulous adventurers, all of whom are competing to obtain a jewel-encrusted falcon statuette.

The film premiered in New York City on October 3, 1941, and was nominated for three Academy Awards. Considered one of the greatest films of all time, it was one of the first 25 films selected by the Library of Congress to be included in the National Film Registry for being "culturally, historically, or aesthetically significant”.  It is a part of Roger Ebert's series The Great Movies and was cited by Panorama du Film Noir Américain as the first major film noir.
​
In 1539 the Knight Templars [sic] of Malta, paid tribute to Charles V of Spain, by sending him a Golden Falcon encrusted from beak to claw with rarest jewels, but pirates seized the galley carrying this priceless token and the fate of the Maltese Falcon remains a mystery to this day. So reads the introductory text appearing after the film's opening credits.

​The plot is intriguing in true Hammett style. It begins in San Francisco in 1941, when private investigators Sam Spade and Miles Archer meet prospective client, Ruth Wonderly. She claims to be looking for her missing sister, who is involved with a man named Floyd Thursby. Archer agrees to follow her that night and help get her sister back. 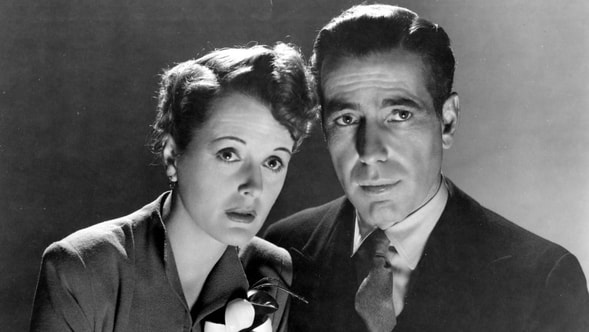 Spade is awakened by a phone call early in the morning and the police inform him that Archer has been killed. He meets his friend, Police Detective Tom Polhaus, at the murder scene and then tries calling his client at her hotel, but she has checked out. Back at his apartment, he is grilled by Polhaus and Lieutenant Dundy, who tell him that Thursby was also murdered the same evening. Dundy suggests that Spade had the opportunity and motive to kill Thursby, who likely killed Archer. Archer's widow Iva later visits him in his office, believing that Spade shot his partner so he could have her.
​
Later that morning, Spade meets his client, now calling herself Brigid O'Shaughnessy. She explains that Thursby was her partner and probably killed Archer but claims to have no idea who killed Thursby. Spade distrusts her but agrees to investigate the murders.

At his office, Spade meets Joel Cairo, who first offers him $5,000 to find a "black figure of a bird", then pulls a gun on him to search the room for it. Spade knocks Cairo out and goes through his belongings. When Cairo comes round, he hires Spade. Later that evening, Spade tells O'Shaughnessy about Cairo. When Cairo shows up, it becomes clear that Spade's acquaintances know each other. Cairo becomes agitated when O'Shaughnessy reveals that the "Fat Man" is in San Francisco. 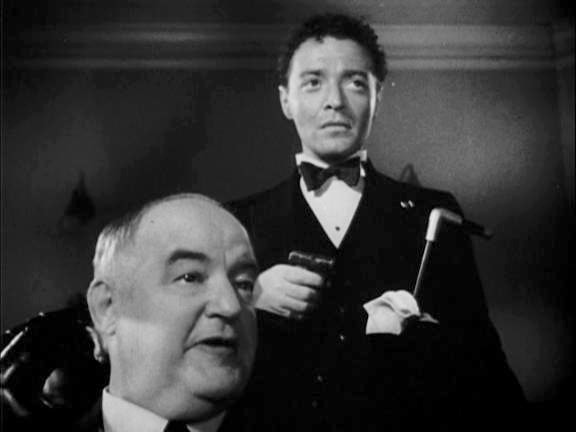 In the morning, Spade goes to Cairo's hotel, where he spots Wilmer, a young man who had been following him earlier, and gives Wilmer a message for his boss, Kasper Gutman. When Spade goes to meet Gutman, alias the "Fat Man", in his hotel suite, Gutman will only talk about the Black Falcon evasively, so Spade pretends to throw a temper tantrum and storms out. Later, Wilmer takes Spade at gunpoint to see Gutman. Spade overpowers him but meets Gutman anyway. Gutman relates the history of the Maltese Falcon, then offers Spade his pick of $25,000 for the bird and another $25,000 after its sale, or a quarter of the proceeds from its sale. After Spade passes out because his drink is spiked, Wilmer and Cairo come in from another room and leave with Gutman.

On coming round, Spade searches the suite and finds a newspaper with the arrival time of the freighter La Paloma circled. He goes to the dock, only to find the ship on fire. Later, the ship's captain, Jacobi, shot several times, staggers into Spade's office before dying. The bundle he was clutching contains the Maltese Falcon.

O'Shaughnessy calls the office, gives an address, then screams before the line goes dead. Spade stashes the package at the bus terminal, then goes to the address, which turns out to be an empty lot. Spade returns home and finds O'Shaughnessy hiding in a doorway. He takes her inside and finds Gutman, Cairo, and Wilmer waiting for him, guns drawn. Gutman gives Spade $10,000 for the Falcon, but Spade tells them that part of his price is someone he can turn over to the police for the murders of Thursby and Captain Jacobi, suggesting Wilmer, who, Gutman confirms, did shoot both. After some intense negotiation, Gutman and Cairo agree, and Wilmer is knocked out and disarmed.
​
Just after dawn, Spade calls his secretary, Effie Perine, to bring him the bundle. However, when Gutman inspects the statuette, he finds it is a fake and Wilmer escapes during the tumult. Recovering his composure, Gutman invites Cairo to return with him to Istanbul to continue their quest. After they leave, Spade calls the police and tells them where to pick up the pair. Spade then angrily confronts O'Shaughnessy, telling her he knows she killed Archer to implicate Thursby, her unwanted accomplice. She confesses but begs Spade not to turn her over to the police. Despite his feelings for her, Spade gives O'Shaughnessy up. 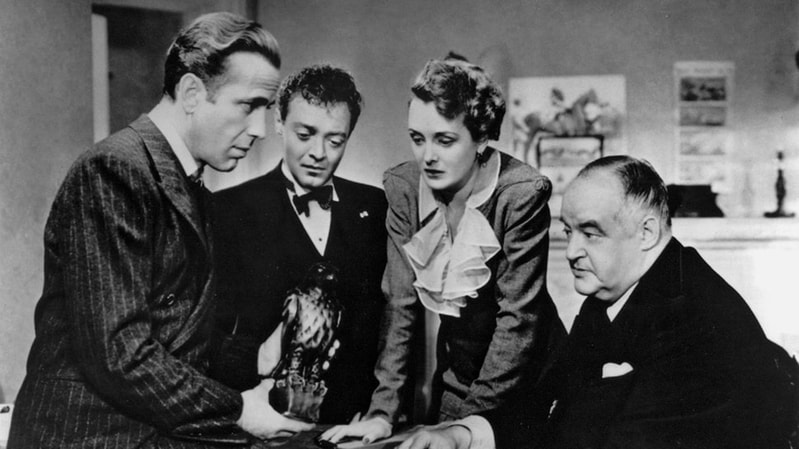 The Influences
Hammett once worked as a private detective for the Pinkerton Detective Agency in San Francisco, and he used his birth name "Samuel" for the story's protagonist. He wrote of the book's main character in 1934:
Spade has no original. He is a dream man in the sense that he is what most of the private detectives I worked with would like to have been, and, in their cockier moments, thought they approached.

Other characters in movie were based on people whom he met or worked with during that time. The novel was serialized in five parts in Black Mask during 1929 and 1930 before being published in book form in 1930 by Alfred A. Knopf. It was first filmed the next year and for a second time as Satan Met a Lady in 1936 but rewritten as a light comedy with many elements of the story changed.

Casting
Bogart was not the first choice to play Sam Spade. Producer Hal B. Wallis initially offered the role to George Raft, who rejected it because he did not want to work with an inexperienced director, choosing instead to make Manpower with director Raoul Walsh and co-starring Edward G. Robinson and Marlene Dietrich. This was one of several roles Raft turned down in movies that ended up being classics.

Huston was grateful that Bogart had quickly accepted the role, and the film helped to consolidate their lifelong friendship and set the stage for collaboration on other films. Bogart's convincing interpretation became the archetype for a private detective in the film noir genre, providing him acclaim and solidifying his onscreen persona. Ingrid Bergman watched Maltese Falcon repeatedly while preparing for Casablanca to learn how to interact and act with Bogart.
​
The character of sinister "Fat Man" Kasper Gutman was based on Maundy Gregory, an overweight British detective-entrepreneur who was involved in many sophisticated endeavours and capers, including a search for a long-lost treasure like the jewelled Falcon. However, the character was not easily cast, and it took some time before producer Hal Wallis suggested that Huston screen test Sydney Greenstreet, a veteran stage actor who had never appeared in film before. Greenstreet was 61 years old and weighed between 280 and 350 pounds, and he impressed Huston with his sheer size, distinctive abrasive laugh, bulbous eyes, and manner of speaking. The character of Joel Cairo was based on a criminal whom Hammett arrested for forgery in Pasco, Washington, in 1920. 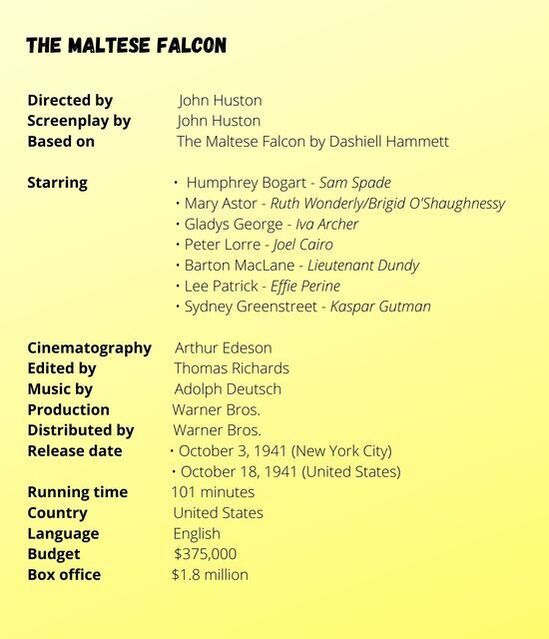 Fred Sexton, an American artist, sculpted the Maltese Falcon statuette prop for the film. The "Maltese Falcon" itself was based on the "Kniphausen Hawk", a ceremonial pouring vessel made in 1697 for Georg Wilhelm von Kniphausen, Count of the Holy Roman Empire. It is modelled after a hawk perched on a rock and is encrusted with red garnets, amethysts, emeralds, and sapphires. It is currently owned by the Cavendish family and is part of the collection at Chatsworth House.

Several 11.5-inch (29 cm) tall falcon props were made for the film. Studio chief Jack L. Warner gave a metal falcon to William Conrad; it was auctioned in December 1994 for $398,500, the highest price paid for a film prop at that time. A 45-pound metal prop that appeared in the film was sold at auction on November 25, 2013, for over $4 million.

The movie’s success immediately followed a preview in September 1941. Variety called it "one of the best examples of actionful and suspenseful melodramatic story telling in cinematic form".

Upon its release, Bosley Crowther described it as "the best mystery thriller of the year", saying "young Mr. Huston gives promise of becoming one of the smartest directors in the field"; according to Crowther, "the trick which Mr. Huston has pulled is a combination of American ruggedness with the suavity of the English crime school — a blend of mind and muscle — plus a slight touch of pathos". The widely read trade paper The Film Daily agreed with Crowther's assessment of the film and focused special attention as well on Huston's directorial debut. In its 1941 review of the "beautifully made" production, the paper asserted: "John Huston's direction of his own screenplay is as brilliant as any of the jewels which are alleged to encrust the falcon whose possession is the crux of the story".

As a measure of modern or more current reactions to the film, the review-aggregation website Rotten Tomatoes reports The Maltese Falcon holds an approval rating of 100% based on 64 reviews, with an average rating of 9.10/10. The site's critics consensus reads: "Suspenseful, labyrinthine, and brilliantly cast, The Maltese Falcon is one of the most influential noirs, as well as a showcase for Humphrey Bogart at his finest." On Metacritic, the film has a weighted average score of 96 out of 100, based on 15 critics, indicating "universal acclaim".

As a result of the film's success, Warner Bros. immediately made plans to produce a sequel entitled The Further Adventures of the Maltese Falcon, which Huston was to direct in early 1942. However, due to Huston's high demand as a director and unavailability of the major cast members, the sequel was never made.

In 1989, The Maltese Falcon was selected for preservation in the United States National Film Registry by the Library of Congress as being "culturally, historically, or aesthetically significant", going in the first year of voting. Roger Ebert added it to his "Great Movies" list.