​The Knights of Malta​

The Knights of Malta were a Roman Catholic religious and military order under its own Papal charter established in the 11th century, following the establishment Kingdom of Jerusalem after the First Crusade. 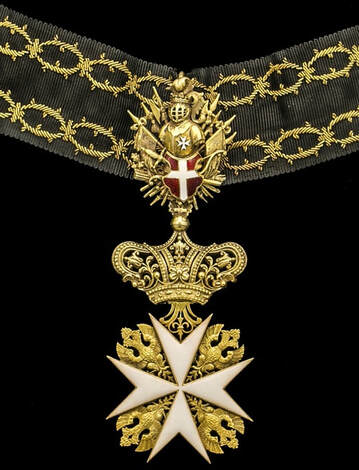 Before the established Order existed, their predecessors, then referred to as the Knights Hospitaller, were associated with a hospital in Amalfi, Italy. Their primary mission was to provide care for the sick, poor or injured pilgrims returning from the Holy Land, present-day Israel and the Palestinian territories.

The Knights’ main mission was to defend the Holy Land and provide care for the injured and they built several forts and estates in the area to support that mission.

Organisation and structure
Around 1300, the Knights organised themselves through langues or tongues, which were administrative divisions roughly based on the geographical distribution of the Orders’ members and possessions with a Grand Master as the head of the Order.

Each of these langues had a headquarters, referred to as Auberges, which in French means  hostel or inn.
​
The seven langues that existed were: 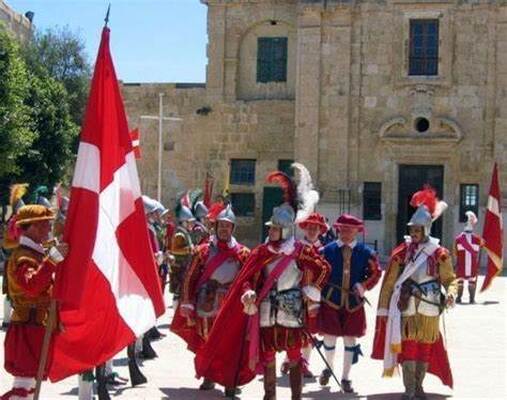 The Knights in Cyprus and Rhodes
After the fall of the Kingdom of Jerusalem in 1291, the Order settled in Cyprus but found themselves in a weak position. They then embarked on a four-year campaign to establish a new stronghold on the Greek island of Rhodes.

Between 1310 and 1522, Rhodes was to be the home of the Knights Hospitaller, who by then were referred to as the Knights of Rhodes.
The rise of the Ottoman Empire and the constant threat of pirates, including the mostly Ottoman Barbary pirates, meant that the Knights were forced to become a more militarised force.

Although they managed to withstand fierce attacks on Rhodes until 1522, they were vastly outnumbered during a 6-month siege by the Ottoman Empire and were defeated with the surviving Knights  allowed to escape to Sicily. 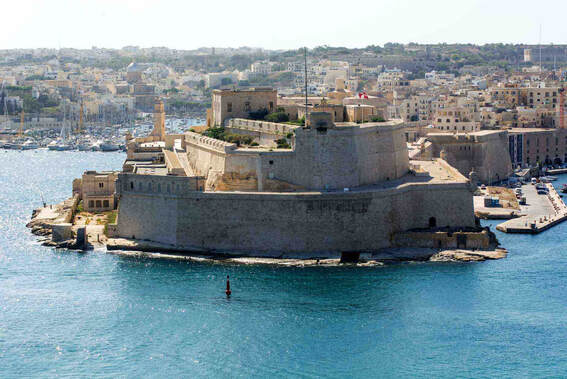 Fort St. Angelo today.
The Knights of the Military Order of Saint John in Malta
The Knights’ chapter in Malta started in 1530. After years of having no permanent headquarters, Charles V of Spain, then ruler of Malta as King of Sicily, gave the Knights the islands of Malta and Gozo, as well as the city of Tripoli, present-day capital of Libya.

When the Knights took over Malta and Gozo, the islands were seen as small and offering little resources and Malta was never meant to be the Knights’ permanent home as they still hoped to one day recapture Rhodes but, after the Great Siege of 1565, they decided to stay in Malta and build a stronghold there.

The Order started by building a naval base because they recognised that the location meant the island could prove to be of strategic value. Positioned at the centre of the Mediterranean, a stronghold in Malta meant it could serve as a gateway between East and West. Over time they transformed Malta from a bare island to a thriving stronghold with magnificent fortifications.

Although they were offered the key to Mdina, Malta’s then capital city, the Knights decided to settle in present-day Birgu and improved Fort St. Angelo which had existed since Medieval times as a castle and which became their main fortification and seat of power.
​
The local population initially wasn’t very enthusiastic about the Knights, and the Maltese were excluded from joining the order. However, both groups peacefully coexisted, with the Maltese recognising the protection and relative improvement in prosperity which the Knights brought with them. 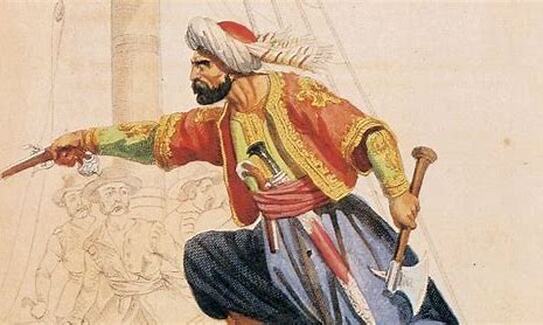 Dragut Reis
Invasion of Gozo and loss of Tripoli
1551 proved to be an important year. Up until that point, the Knights were under constant threat from Ottoman pirates led by commander Dragut Reis, a highly skilled and successful military man.

Having allowed the surviving Knights to escape from Rhodes, the Ottomans, weren’t happy to see them re-established and developing in Malta.

Dragut and his admiral, Sinan Pasha, attempted to invade Malta in 1551 with a force of 10,000 men, entering what we now refer to as Marsamxett Harbour. This harbour is located on the west side of the Sciberras peninsula on which Valletta was built (although the city didn’t exist at this point in time) while the Knights in Birgu were located on the eastside, across present-day Grand Harbour.

After landing, the Ottoman forces marched on Birgu and Fort St. Angelo but soon realised it was too well-fortified to be taken easily. They decided to raid and loot villages and take Mdina instead, but by that time word had spread and the city was also up in arms so an attack was decided against. Meanwhile, their fleet that lay anchored at Marsamxett harbour were under attack from relief forces.

Changing plans yet again, Dragut sent Sinan to attack Gozo and its citadel. Although also heavily fortified, the bombardment that ensued moved local governor Gelatian de Sessa to capitulate. The Ottomans sacked the citadel, enslaved the 6,000 or so Gozitan civilians that sought protection in the citadel, and took control over the island.
​
Knowing that it wouldn’t be long for the Ottomans to try and take Malta again, the Knights set out to fortify Fort St. Angelo and in a very short period of time (less than six months) built Fort St. Michael at present-day Senglea and Fort St. Elmo across the harbour, at the tip of present-day Valletta. 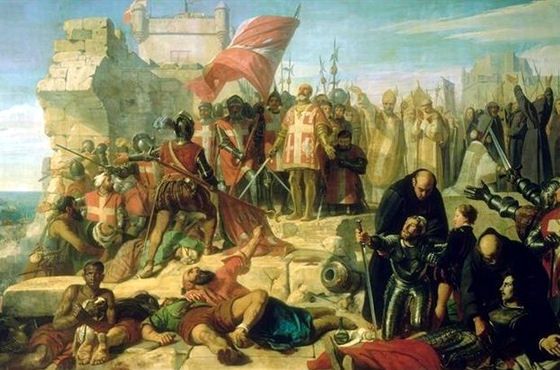 The end of the Great Seige.
​The Great Siege of 1565
Being informed by spies in Constantinople of an imminent attack in early 1565, then Grand Master de Valette put in place preparations for the battle to come. He ordered all crops to be harvested, even those that weren’t yet ripe, to ensure that the opposing forces wouldn’t be able to source food for their troops. He also poisoned all the wells.

The Ottoman armada consisted of a force of 36,000-40,000 soldiers that were sent to take Malta in March 1565. It was a force expected to be easily large enough to take on the Knights who commanded a force of just 6,100 soldiers and civilians of which only around 500 were Knights Hospitaller.
What ensued was a battle and siege that became legendary in Western modern history and halted the potential domination and control of the whole Mediterranean by the Ottoman Empire.

Although the Ottomans successfully gained control over Fort St. Elmo, they lost around 6,000 in that battle alone.
Several attacks on Fort St. Michael (Senglea) followed but progress was slow and losses in troops high.

In September, a relief force in the form of around 8,000 men sent by the Viceroy of Sicily under pressure from his most senior officers, landed in the North of Malta. They massacred a large part of what remained of the Ottoman forces.
​
Despite large casualty numbers, the Knights were victorious in their defense of Malta, and of the Christian West as a whole, having successfully prevented the Ottomans from gaining a foothold on the doorstep of Western Europe. 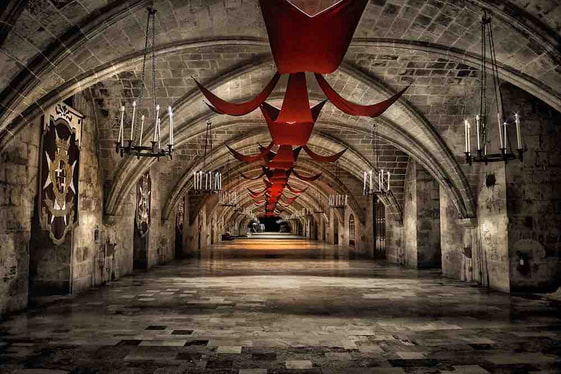 La Sacra Infermeria
​The Knights and Malta after the Great Siege
Now firmly in control and having prevented an even bigger Ottoman threat to Christendom, the Order received funding and architectural expertise to improve fortifications in Malta.

During their 268-year reign, the Knights built various structures as part of major projects, most notably: 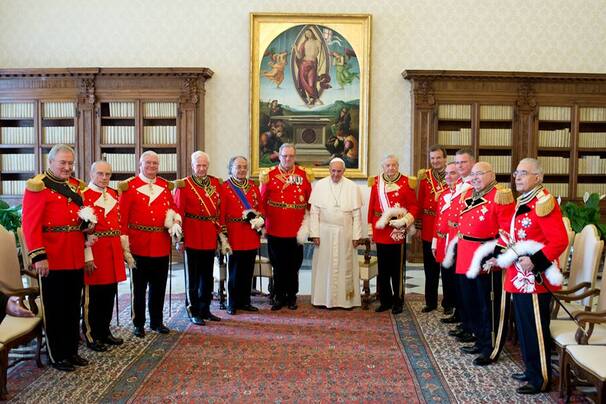 The decline of the Knights’ rule in Malta
In the 18th century, during the reign of Grand Master Manuel Pinto da Fonseca, the Knights successfully obtained sovereign rule over Malta, cutting themselves loose from the Kingdom of Sicily but that sovereign rule only lasted a few decades.

Napoleon managed to seize Malta in 1798, with little resistance from the Knights, but the French themselves were ousted by Maltese revolutionaries who received support from Great Britain. Although the Knights tried to regain control, Malta became a colony of the British Empire officially in 1813.
​
The Sovereign Order of Malta today
Focusing on humanitarian activities in the original spirit of the Knights Hospitaller and shedding its military functions, the Order of Saint John settled in Rome in 1834.

In the late 20th century, treaties were signed with the Republic of Malta for the Order to be able to use the upper portion of Fort St. Angelo as well as St. John’s Cavalier in Valletta to support its missions.

Still strongly religious in its practices, the Order is nowadays an international organisation that carries out humanitarian missions and charitable activities around the world. The Order is supported by the UN, governments across European Union, foundations, and private donors, having around 1.5 billion Euros in support annually.