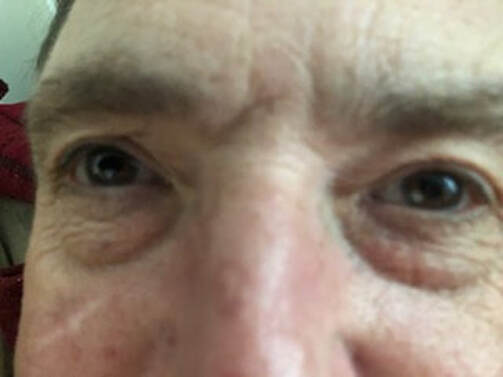 As a retail worker during this pandemic , I see more and more customers wearing masks. When they come towards me, I find it difficult to read their body language because the face is part of the equation. Now I have to pay attention to their eyes and try to read them. That’s something I have failed at in the past.

Growing up I remember noticing the eyes of my family and friends but I didn’t understand why. I did not realize there were answers and messages in them.

I lost my Father, Toney McKelvey, to Parkinson’s Disease in 1985.
A cruel disease that traps a sharp mind in a crippled body.
I couldn’t read eyes then but I loved my Father and hated what he suffered.
I remember his eyes, but I couldn’t read them.
He was always kind and funny, despite the pain he was feeling.

When the disease progressed , his lungs became infected and he was in the hospital. I believe I thought he would get well enough to come home, but he died alone. I remember the call from the hospital but not the drive to get there. My family and I walked into his room and then to his bedside. I looked into his eyes, but he was gone.

I am not sure why, but after I kissed his forehead, I gently closed his eyes.

In the year 2000, I really failed.
My father-in-law , a man that I loved and who loved me, lay dying in a hospital, hooked up to a ventilator.
The last time I saw him he grabbed my arm and looked at me with beseeching eyes. I knew he wanted me to help but I did not understand that I had the power to and damn it, I am so sorry. I could have suggested a different treatment or hospital or something, surely. A failure that haunts me to this day.
A crack in my heart that will not heal.

I suppose I started learning to read eyes in 2006 through 2009 when our granddaughters, Adelyn and Jubilee, came along. My wife, Sherry, and I looked after them several days a week while their mothers worked. I could tell when they were scared or in pain or when they wanted me to hold them while they slept. I learned so much from those little girls. How to love unconditionally and trust completely.

In 2012, my mother, Rachell, had been fighting Lou Gehrig’s disease (ALS), for five years. This cruel disease had finally gotten to her lungs and she lay in the hospital hooked up to a ventilator. Initially she had told the doctor that she wanted to fight. She had been on the ventilator for four weeks when I received a call from my sister, Joyce, that I needed to come to the hospital.  When I arrived at the hospital and went to my mother’s bedside, there was no mistake in the message in her eyes. She had dark, deep brown eyes that could show extreme love and sometimes mischief, but this day they were pleading. She wanted that machine out of her. I repeated to her what I read in her eyes. She nodded “yes.” I told her it would be the hardest thing I had ever done but if it’s what she wanted, I would. I turned my head so she couldn’t see my suddenly flushed face and the hot tears running down it.
After hugging my wife and sister, I went to the lobby to call my Uncle Rhodney, my mother’s only remaining sibling and a man who always had my upmost respect. I told him the situation and asked if he wanted to come see her, if so, I would wait about having the ventilator removed. He said “No, we have to do what she wants, not what we want.”

I then took a lonely elevator ride to my mother’s floor, hugged my wife and sister again, then asked to speak with the doctor. Then I gave the order to remove the ventilator.

In about forty five minutes, after my prayer over her of which I have no memory, my mother breathed her last.

My sister said it was a beautiful prayer. I must take her word and assume an Angel was speaking through me.

I guess as we lose those we love, we learn to appreciate more and be more sensitive to the people around us.

So now when I’m at work and I see all those customers in masks, some ,if not all, of these memories come in flashes as I greet the customers and try to read their eyes in the instant before they speak.  Most of the time they just want kind help and consideration, just like we all do.

There are many answers to life’s questions that I do not have but I believe I have learned a few. We are as humans constantly searching for the one answer that to each person is a different question.

I believe the eyes have it.

Lonnie McKelvey is a freelance writer based in Fort Payne, Alabama, and is a regular contributor to Grandparents Day Magazine.