The celebration music of Handel​

The Water Music Suites and the Music for the Royal Fireworks are among Handel's best loved works. One got him out of trouble and the other was a trouble from start to finish. 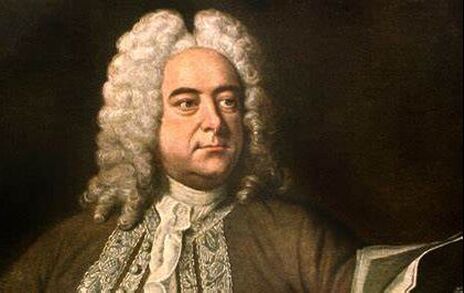 In 1712 George Frideric Handel, court composer to George, Elector of Hanover in Germany, visited London, with his employer’s warning that he expected him back ‘within a reasonable time’ ringing in his ears.
​
But Handel did not go back within a reasonable time. He remained in the London, cheerfully writing matchless music for the court of Queen Anne. Prince George fired him.

If Handel thought he had got the better part of the bargain, he was forced to reconsider when, in 1714, Queen Anne died and was succeeded on the throne of Great Britain by none other than her second cousin, George, Elector of Hanover.
​
Fortunately, a tactful friend secured a commission for Handel to write music for a royal water party on the Thames on the 17th of July, 1717.
It was a tremendous success, and not long after Handel was reemployed by the King, and retained as music master to their daughters by Queen Caroline. 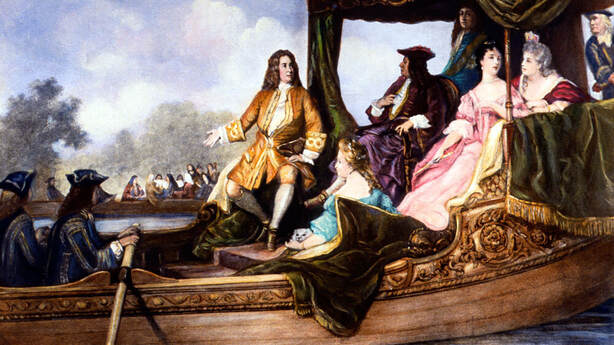 The first performance of the Water Music was recorded in The Daily Courant, the first British daily newspaper. At about 8 p.m. on Wednesday, 17 July 1717, King George I and several aristocrats boarded a royal barge at Whitehall Palace, for an excursion up the Thames toward Chelsea. The rising tide propelled the barge upstream without rowing. Another barge, provided by the City of London, contained about 50 musicians who performed Handel's music. Many other Londoners also took to the river to hear the concert. According to The Courant, "the whole River in a manner was covered with boats and barges".

​On arriving at Chelsea, the king left his barge, then returned to it at about 11 p.m. for the return trip. The king was so pleased with Water Music that he ordered it to be repeated at least three times, both on the trip upstream to Chelsea and on the return, until he landed again at Whitehall.
​
Handel's orchestra is believed to have performed from about 8 p.m. until well after midnight, with only one break while the king went ashore at Chelsea.

It was rumoured that the Water Music was composed to help King George refocus London attention away from his son and heir (later George II of Great Britain), who, worried that his time to rule would be shortened by his father's long life, threw lavish parties and dinners to compensate for it; the Water Music's first performance on the Thames was the King's way of reminding London that he was still there and showing he could carry out gestures even grander than his son's.
​
By contrast Handel’s Music for the Royal Fireworks  is a story of disagreements, bonfires, and… a lot of traffic.

The Royal Fireworks suite was commissioned by King George II in 1749 to mark the end of the War of the Austrian Succession, involving most of the European powers.

The English and the French signed the Treaty of Aix-la-Chapelle on October 27, 1748, bringing the War to a close. It had dragged on for eight years and had proven so exhausting that eventually all the parties were relieved to have it over. Both sides immediately began planning victory celebrations, and the English plans were elaborate. George II’s staff brought in the designer Florentine Servandoni, who erected what was called a “Machine” in Green Park, directly across from Buckingham Palace. Over 400 feet long and 100 feet high, this structure took the form of a Doric-style pavilion. The royal “victory” celebration on April 27, 1749, was to be a real show in every sense of that term: over 100 cannons would fire a thunderous salute, followed by a massive fireworks show, and Handel was commissioned to write music to accompany all this.
​
George’s Comptroller of his Majesty’s Fireworks for War as for Triumph (yes, that was his title) – organized a fireworks display involving nearly 10,000 rockets and 101 cannons. But what good are elaborate pyrotechnics without the right music?
​
Enter Handel. 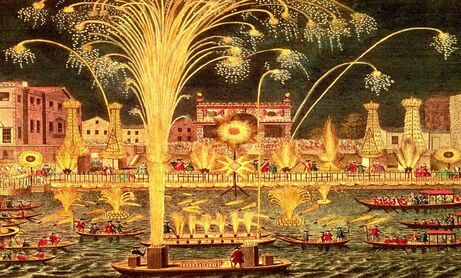 Much to the composer’s chagrin, Handel was given guidelines for the piece… not overly long, heavy on the military instruments (i.e. brass, woodwinds, and percussion), and ‘no fiddles.’ Handel would later rescore the Royal Fireworks suite for a full orchestra, including strings, which is the version we hear most often today.

At its premiere, however, the piece was scored for 9 trumpets, 9 horns, 12 bassoons, 24 oboes, three pairs of kettle drums, and a handful of side drums.
Six days before the big celebration, 12,000 people crowded streets, roofs, and boats to hear the piece performed at the dress rehearsal. Afterwards, the audience dispersed en mass. To make matters worse, London Bridge had fallen down – the central arch of the new structure had collapsed – so the main road was blocked. The resulting chaos caused a three-hour traffic jam of carriages!

In the end, that dress rehearsal turned out to be significantly more successful than the concert itself. On the night of the big event, despite the incredible music, the fireworks failed to wow the crowd. Rockets misfired or refused to light at all. The display was said to be “pitiful and ill-conducted, with no changes of coloured fires and shapes: the illumination…lighted so slowly that scarce anybody had patience to wait the finishing.”
However, the evening did end with a dazzling display. A stray rocket caught the wooden pavilion on fire. A stiff wind quickly turned this into a conflagration, the crowd panicked and fled, and the gaudy pavilion burned to the ground. Oops.
​
There is no record of Handel’s reaction to all this, but the following month he performed this music – with the number of winds reduced and the “fiddles” included – at a benefit concert for his favourite charity, the Foundling Hospital of London, and that occasion produced a profit of 2575 pounds for the orphanage. Since that time, the Music for the Royal Fireworks has remained one of Handel’s most popular works.