The Way of Tea

But by the 13th century, tea had become a status symbol and samurai were participating in luxurious tea-tasting parties, where prizes were given out for guessing the correct variety of tea. The drink was seen as a decadent luxury, synonymous with Japanese nobility, and tensions started to emerge between opulence and minimalism in tea culture. These tensions would come to a bloody climax more than 200 years later.

Wabi-sabi and the influence of Rikyu 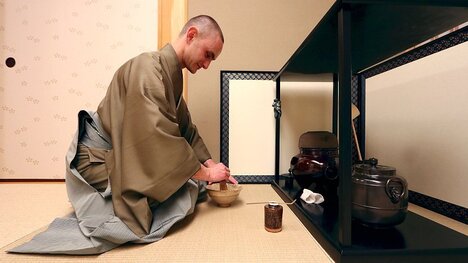 A seismic shift in Japanese tea culture began around the Muromachi  period (1333-1573) when tea drinking reverted to a spiritual practice. Central to this was the concept of Wabi-sabi, the belief that accepting transience and imperfection is the first step towards enlightenment.

In the 15th century, the two most important figures in the history of Japan’s tea culture emerged; Murata Juko and Sen no Rikyu. The former was a Buddhist widely recognised as the father of the Japanese tea ceremony. He introduced the four core values of the ceremony – kin, or reverence; kei, respect for food and drink; sei, purity in body and spirit; and ji, calmness and freedom from desire. Juko’s methods – a far cry from the social elitism that had dominated tea consumption over the preceding few centuries – meant that tea-drinking started spreading to different levels of Japanese society.

In the 16th century, Rikyu had the most profound influence on the chadō. He incorporated the philosophy of Ichi-go ichi-e (“one time, one meeting”), the idea that each individual encounter should be treasured as such a meeting will never happen the same way again.

A bloody turn of events 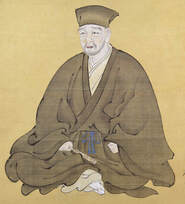 Sen no Rikyu
It was an argument on how to make tea, which not only resulted in at least two grisly deaths but also firmly established Rikyu’s legacy. Rikyu was close with the samurai regent Toyotomi Hideyoshi, enjoying his lord’s full support as he went about spreading the ascetic ceremonial tradition, now known as “The Way of Tea”. But Hideyoshi had his own ideas on tea ceremonies, which were at complete odds with Rikyu’s minimalist, dignified approach. For the regent, tea had become political and cultural currency, a means to demonstrate power and influence as well as a win over noblemen and warriors.
Rikyu, however, was less concerned with tea ceremonies as a form of political grandstanding and doggedly pursued his notions of humility and spiritual purity. Gradually, their friendship became fraught as Hideyoshi started seeing the monk as a political obstacle. Things took a dramatic turn when, in 1590, Hideyoshi ordered one of Rikyu’s disciples to be executed. Then, one year later, the regent ordered his former tea master to commit suicide. With characteristic selflessness, the monk obeyed his lord’s decree and in his final moments composed the following poem, which he addressed directly to the dagger he used to kill himself;

Rikyu’s violent end gave way to three schools, which pledged to continue his tradition, guiding it away from the samurai and ruling class and towards the townspeople of Japan. In the early 20th century, Okakura Kakuzō wrote The Book of Tea. One passage in particular sums up the tea ceremony’s raison d’être, a practice that is still carried out in Japan to this very day:
“Teaism inculcates purity and harmony, the mystery of mutual charity, the romanticism of the social order. It is essentially a worship of the Imperfect, as it is a tender attempt to accomplish something possible in this impossible thing we know as life.”

The first step is to arrive a little before your reserved time to wait in the waiting room, usually a tatami mat room with an alcove displaying a traditional hanging scroll. The guests are served a hot cup of kombu tea or roasted barley tea to enjoy while they wait for the other guests to arrive. The tea ceremony is usually done in small groups of about 4 or 5 people.
​
Dress code
Avoid gaudy fashion and fragrance that distracts from the tea experience. Wear modest clothes, remove jewellery that may damage the tea equipment and avoid strong perfumes.

Garden
The traditional tea house is surrounded by a garden, although many modern venues lack a garden. The garden is deliberately kept tranquil and simple to encourage a calm spirit. Flowers with gaudy colours or deep scents are avoided as they are a distraction. Stones of varying shapes and sizes make up the path that leads to the teahouse. A stone lantern is usually placed close to a tsukubai (stone basin) near the entrance. 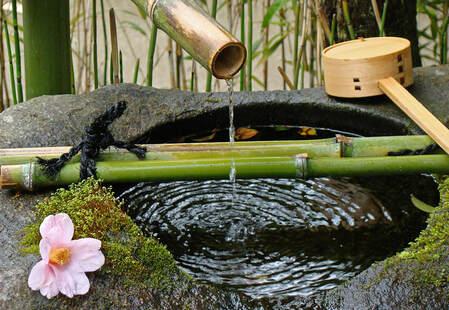 Tsukubai
Guests should stop at the tsukubai to ritually purify body and soul and spiritually prepare for the ceremony. This is done by washing your hands and rinsing your mouth with water, in an attempt to symbolically rid yourself of the dust and dirt of the outside world. Once this is complete and the host has signalled that he or she is ready to receive the guests, you can procede to the tea house where the ceremony will take place.
​
Tearoom
​The ceremony is traditionally held in a tatami room. The room is traditionally very sparse with the only decorative elements being an alcove or tokonoma where a scroll or seasonal flowers might be displayed. These would have been specially chosen for this one occasion and based on seasonal

Remove your shoes and enter the tea room through a small door which forces the guests to bow as a sign of humility and respect to the host. Sit and wait patiently in the seiza-style (sitting on your heels) on the tatami. Once guests have taken their positions, it is customary to bow once more before observing the decorations in the tokonoma. After the last guest has taken their place, the host will enter the room and welcome each of the guests.

The host will start the tea ceremony by gracefully cleaning the tools in front of the guests before using them. Next, they will begin preparing the matcha green tea. Usually three scoops of powdered green tea is added to a tea bowl, followed by hot water with the whole lot whisked into a thin paste.

The host typically prepares the tea in front of the guests. The main equipment includes the tea whisk (chasen), tea container for the powdered green tea (natsume), tea scoop (chashaku), tea bowl, sweets container or plate, and the kettle and brazier. Each piece of equipment was carefully selected according to circumstance and has its specific place.

Enjoying the tea and bowl 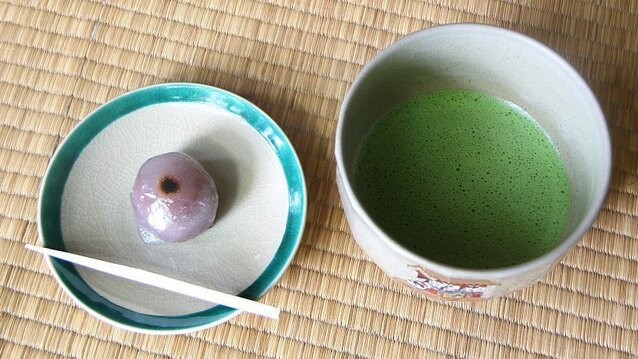 A Japanese sweet is often served and is supposed to be eaten before the tea is drunk. The tea bowl is placed onto the tatami mat in front of you, with its front facing you. Pick it up with your right hand and place it on your left palm. With your right hand, turn it clockwise by around 90 degrees so that its front is not facing you anymore. Drink the tea in a few sips and place it back onto the tatami. Bow and express gratitude after receiving and finishing your tea.

Towards the end of the ceremony, there will be time to inspect and appreciate the tea bowl by lifting it. Once finished, turn the bowl so that the front now faces the host. The host may ask if guests would like another round of tea, and if not, the tea ceremony is over when the host washes the tea utensils and returns the equipment to where they were before starting.