A baby and a boat. 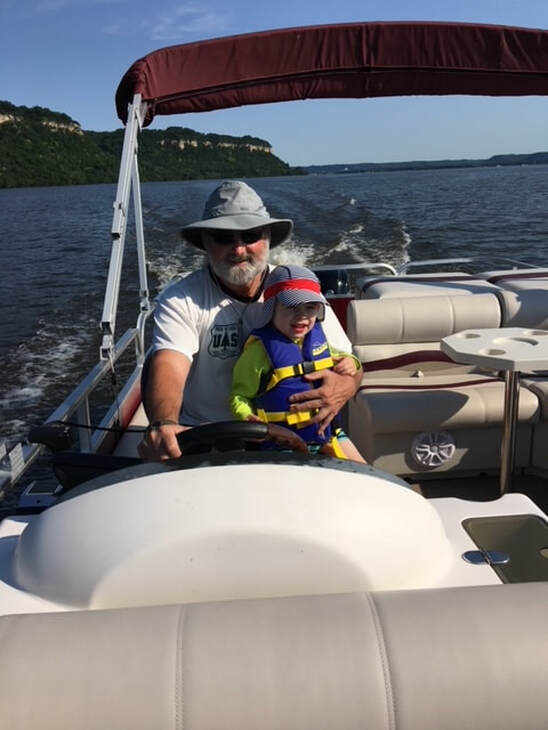 It was a split decision for my wife Peggy and me. As parents, we were very pleased that each girl found her own place in the world, was doing well, and was happy. We only wished those places could have been a little closer to us.

Our oldest daughter, Greta, had moved to Oregon, our middle daughter Romney to Minnesota, and our youngest daughter Denby to Colorado. None of them were talking about coming back to Montana.

Even with both of us retired from teaching, we still had difficulty seeing all the girls. Each one was a long journey, and it didn't work to try to swing by two of them on one trip. We loved to visit them, but it was a lot of work, a lot of expense.

We hoped we might find a way to bring the family closer together, or at least get us closer to them, but with them spread so far apart, we didn't see a solution.

Then we learned that Romney was expecting our first grandson. We packed our bags and waited, knowing we would drive 13 hours to Minneapolis as soon as we heard.

She called at 4 a.m. on Oct 13, 2016 and told us she had gone to the hospital. We jumped in the car and set out. During a gas stop in Bismarck, North Dakota, we received a text that Archer was born. We arrived in the Twin Cities and held him that evening.

Romney and Kyle had already been looking for day care for Archie. Like so many things in a big city, the cost was high, and the waiting lists were long. Romney got him on a list for day care at her work, but it would be a longer wait than she had time off for maternity leave.

Peggy and I offered to come stay with him. Through Airbnb, we found an apartment only five blocks from Kyle and Romney. It seemed like a grandparents' dream.

A good friend of mine once told me, “It's my experience that the grandparents move to where the first grandchild is born.”

I understood what he was saying, but I was surprised at how quickly his comment became prophetic.

Peggy and I loved babysitting Archie. It was hard work. We were often exhausted at the end of the day. It had been 26 years since we had a baby of our own to care for, but we quickly relearned, and at the same time, learned many new rules of childcare.

We had fun. We took him on walks. We took him out to lunch. We played with him and watched all the early steps of sitting up, rolling over, laughing, that grandparents prize so deeply.

It would be difficult in some ways. We would be walking away from our home of more than two decades, leaving behind good friends, saying goodbye to memories. But we were tired of driving so far to spend a few days with a daughter, then driving all the way back to Montana. A move to Minnesota would give us access to family.

One thing we feared was moving too close, of invading their lives after years of living at a distance. The lake community was perfect. We would not be living right in their backyard. They would have their space. We would have our space, but we could get together anytime we wanted. It seemed like the perfect combination.

When we moved, we bought a home we loved, then bought a boat and got a slip at the marina. Archie's arrival had prompted us to make changes that answered many of our longtime goals
​.
Since we moved, Greta and Denby have come to visit more often. Part of it is Archie – our grandson, one daughter's son, two daughters' nephew. Part of it is the beautiful lake. Part of it is the fun on the boat. The reason doesn't matter as much as the more frequent visits, and the talk of returning for future visits. The family is getting together and having fun.
Steve Gardiner taught high school English and journalism for 38 years in Wyoming, Peru, and Montana. He currently works as a newspaper reporter in Minnesota and has published articles in The New York Times, The Chicago Tribune, Educational Leadership, and many others. His most recent book is Adventure Relativity: When Intense Experiences Shift Time (2020). Read more at www.quietwaterpublishing.com.