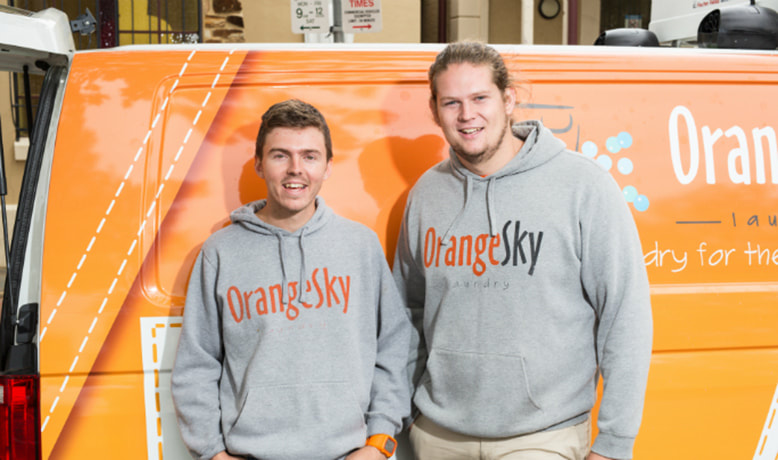 Nicola Heath writes about the world's first mobile laundry for the homeless.

What were you doing when you were 22? Two young social entrepreneurs have created the world's first free mobile laundry for the homeless who are in need of a shower and some clean clothes.

In October 2014, two Australian high school friends Lucas Patchett and Nic Marchesi decided to put a washer and a dryer in an old van to create the world’s first free mobile laundry.

They called their Queensland-based operation Orange Sky Laundry. Its mission is to provide a non-judgmental, safe space for anyone who wants to “do some washing and have a chat,” says Patchett.

Most of the people who use the service are among the 105,000 Australians who are homeless each night. “It might mean someone who's in crisis accommodation, or it might be someone that is experiencing family violence and doesn't feel safe in their own home,” explains Patchett, who first learned about the issue of homelessness at his high school, which operated a food van on the streets of Brisbane.

“If it's a drop-in centre, or a food van, or a welfare centre where someone can get support with health and housing needs, we can rock up beside them, plug in and power up our own machine, and just wash and dry clothes as a freebie."

Today, Orange Sky Laundry has a team of staff in Brisbane that operates 27 vans in 23 cities around Australia with the help of over 800 volunteers, who wash 7.8 tonnes of laundry and provide 1300 hours of conversation.

Orange Sky always operates in conjunction with another service provider. “If it's a drop-in centre, or a food van, or a welfare centre where someone can get support with health and housing needs, we can rock up beside them, plug in and power up our own machine, and just wash and dry clothes as a freebie,” he says.

While demand fluctuates from site to site, Patchett says it’s important to turn up at the same time and place every week. “We pride ourselves on being regular, being reliable, and every week having familiar, friendly faces there to provide that non-judgmental space.”

What it's like to be homeless and have a mental illness?

"I just felt completely and utterly disconnected to you and your world. There's no thinking 'next minute, hour or day' like you do when you have the luxury of your own walls. It's just thought to thought, step to step."

One of the busiest shifts is on a Tuesday in Sydney, when they do around 25 loads of washing. “We might go to a smaller park at the Gold Coast and just do a couple of loads."

In 2015, Patchett and Marchesi took a van to the Central Queensland cities of Rockhampton and Yepoon to help locals in the aftermath of Cyclone Marcia. In the chaos of a natural disaster, the simple act of “washing and drying your clothes can restore a bit of normality to your life,” says Lucas.
​
Orange Sky Laundry has since pitched in to help after bushfires on the Great Ocean Road, floods in the Adelaide Hills, and Cyclone Debbie, where they washed eight tonnes of laundry in five days. “We had people who had used every towel in their house,” says Patchett. “Once their water got turned back on they couldn't have a shower because they had no clean dry towels.” 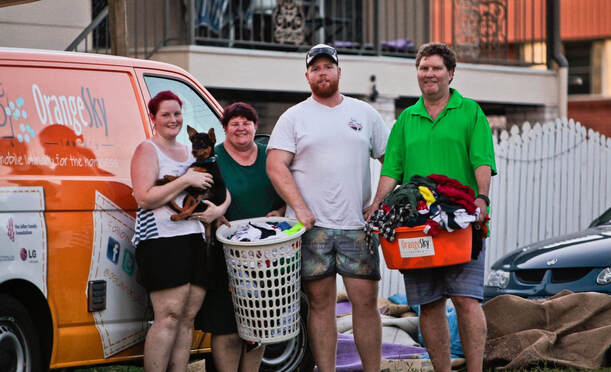 “Washing and drying your clothes can restore a bit of normality to your life."

In 2016, Orange Sky added mobile showers to its laundry service at the suggestion of one of its donors, the Shine On Foundation. Today, 200 hot showers are delivered in vans operating in Brisbane, Melbourne and Sydney. “It’s another way to build trust and build relationships with our friends and then connect them with the services that they need to help themselves,” says Patchett.

Running costs run at $3 per shower and $6 for a load of washing. Orange Sky is currently funded entirely by donations. In 2016, 50 per cent of revenue came from donations from the public - “every day mums and dads,” says Lucas. The other half comes from philanthropic groups, family foundations and corporate donors, including The Good Guys, The Australian Academy of Business, commercial laundry supplier Richard Jay, electronics company LG, and Kennards Hire.

Orange Sky received a huge boost when Patchett and Marchesi were named Young Australians of the Year in 2016 for their work. “We started off the year with about four vans and 200 volunteers, and ended the year with 13 vans and 850 volunteers.”

At the start of 2016, Patchett deferred his university degree in mechanical engineering and commerce and Marchesi took time out from his career in media to focus on Orange Sky, where they remain volunteers, not employees. “We didn't start this to get a job,” says Patchett. “We firmly believe that by chucking CEO at the end of our names doesn't actually make us a CEO. There's people in the community who are just as passionate, and way more qualified to run this. We're both just 22 and learning a lot along the way.”

One thing Patchett has learned is that homelessness is a remarkably complex issue. Every person who is homeless “has an incredibly unique story, and different reasons for why they are where they are,” he says. “There's no pigeon-holing people.”