The black-market in Egyptian artefacts remains a major issue for Egyptian cultural security as long as there are collectors willing to pay big bucks. 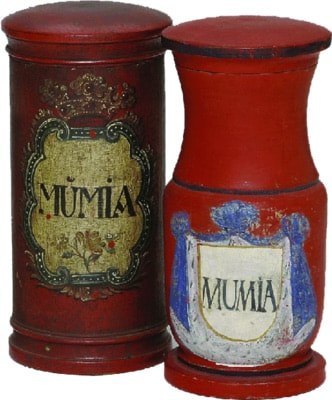 While several international smuggling rings have been dismantled in the last decade, the lure of easy money, particularly American dollars, is still attractive to many low-income Egyptians whose average monthly take-home can be less than $200US.

Amazingly, however, mummy smuggling not only still happens today, it was once so common that mummies were ground up and sold for medicinal use. Mummy powder, or “mummia” could be bought in American pharmacies right up to 1920, because people thought it had health benefits.

Today's black market for mummy and other antiquities is in the billions of dollars, though exact numbers aren't known. Besides not having a clear bead on the breadth of trafficking in Egyptian artefacts, scientists and officials say it's often difficult to protect the precious artefacts as the Egyptian desert is so vast.

A long history of mummy dealings.

The trafficking of mummies traces back to medieval times.

When Christianity and Islam were rising, mummification was not in vogue anymore, although there were some mummies of Christian bishops in Egypt that date back to the seventh and eighth centuries A.D. So from the Middle Ages on, mummies were a bit curious and strange.

Mummification was not just something for pharaohs or the upper class, it was the norm in ancient Egypt for hundreds of years, and so many mummies were made during ancient Egyptian times that there were plenty available to be ground up to make mummia.

Given the way mummification helped preserve the body, people believed that ingesting mummia could help them prolong life.

As strange as grinding up ancient corpses for sale might be in modern times, mummies were seen as objects back then, not people. There was nothing illegal about it. Nowadays, smuggling mummies and any other antiquities out of Egypt is strictly against the law.

Still, while traffic in mummies and Egyptian antiquities has fallen, a black market for them still exists, and the vast nature of the desert in Egypt makes it impossible to protect every possible site from looters. In reality, the illicit sale of cultural property is the third most profitable global black-market industry, following narcotics and weapons trafficking.

The specific numbers regarding art crime remain vague at best but estimates have suggested it brings in between $2 billion and $6 billion annually.
There is no doubt there is still an illegal market for mummies, but these days people are more interested in sarcophagi, their coffins, and in what is around the mummy. The mummy itself is no longer the highest priority.
​
A great deal remains unknown as to how much gets smuggled or what even gets stolen. The International Council of Museums is preparing a red list for Egypt — a catalog of archaeological objects and works of art in danger of getting stolen or sold. Still, in places in Egypt where families are poor and foreigners are offering a great deal of money, it's not surprising there are people who illegally excavate and sell Egypt cultural treasures.