The language of flowers.

A perfumed message of secret intent. 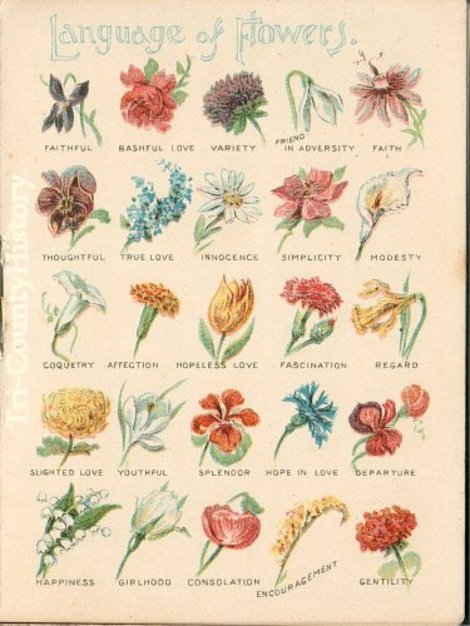 The symbolic language of flowers has been recognised for centuries in many countries throughout Europe and Asia. They even play a large role in William Shakespeare’s works.

Mythologies, folklore, sonnets, and plays of the ancient Greeks, Romans, Egyptians, and Chinese are peppered with flower and plant symbolism—and for good reason. Nearly every sentiment imaginable can be expressed with flowers. The orange blossom, for instance, means chastity, purity, and loveliness, while the red chrysanthemum means “I love you.”

It is believed that the flower language began in Turkey during the seventeenth century. Romantic lovers began using floral exchanges to convey emotional messages.

Depending on the culture, quite different meanings of flowers are attached to the same blooms, so you get a different answer depending on whom you ask. Learning the special symbolism of flowers became a popular pastime during the 1800s.

​In the Victorian era there was a rise in the popularity with this flower language. In England, dozens of dictionaries of "florigraphy" with their flower meanings were published during that period. Suitors carefully studied these guidebooks to select appropriate bouquets for their lovers and sweethearts.Nearly all Victorian homes had, alongside the Bible, guidebooks for deciphering the “language,” although definitions shifted depending on the source. Religious, literary, folkloric and botanical publications were all used to inform meanings.

Examples of plants and their associated human qualities during the Victorian era include bluebells and kindness, peonies and bashfulness, rosemary and remembrance, and tulips and passion.

Flowers provided an incredibly nuanced form of communication. Some plants, including roses, poppies, and lilies, could express a wide range of emotions based on their colour. 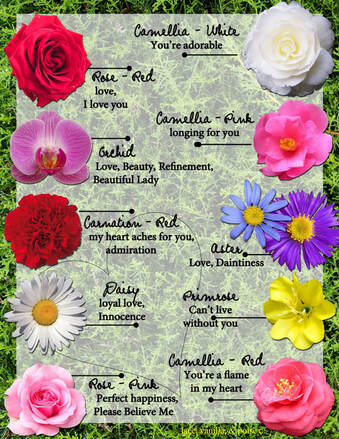 Take, for instance, all of the different meanings attributed to variously coloured carnations: Pink meant “I’ll never forget you”; red said “my heart aches for you”; purple conveyed capriciousness; white was for the “the sweet and lovely”; and yellow expressed romantic rejection.

Likewise, a white violet meant “innocence,” while a purple violet said that the bouquet giver’s “thoughts were occupied with love.” A red rose was used to openly express feelings of love, while a red tulip was a confession of love. The calla lily was interpreted to mean “magnificent beauty,” and a clover said “think of me.”

In a sort of silent dialogue, flowers could be used to answer “yes” or “no” questions, too. A “yes” answer came in the form of flowers handed over with the right hand; if the left hand was used, the answer was “no.”

Plants could also express aversive feelings, such as the “conceit” of pomegranate or the “bitterness” of aloe. Similarly, if given a rose declaring “devotion” or an apple blossom showing “preference,” one might return to the suitor a yellow carnation to express “disdain.”

How flowers were presented and in what condition were important. If the flowers were given upside down, then the idea being conveyed was the opposite of what was traditionally meant. How the ribbon was tied said something, too: Tied to the left, the flowers’ symbolism applied to the giver, whereas tied to the right, the sentiment was in reference to the recipient. And, of course, a wilted bouquet delivered an obvious message!

The meanings and traditions associated with flowers have certainly changed over time, and different cultures assign varying ideas to the same species, but the fascination with “perfumed words” persists just the same. 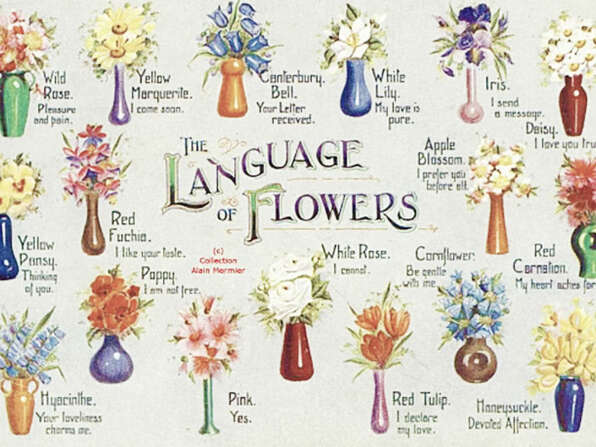 ​​ROSE MEANINGS
Red roses symbolise love and desire, but roses come in a variety of colours and each has their own meaning. For example, the white rose’s meaning is purity and innocence. 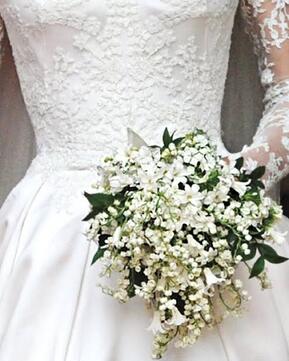 OF COURSE WEDDING BOUQUETS CAN HAVE THEIR OWN SPECIAL MEANING
Flowers have always been a big feature at weddings, too. As an example, look to the royal flower bouquet in the wedding of Prince William, Duke of Cambridge, to Kate Middleton, now Duchess of Cambridge. Her flowers had very special meaning.

Unlike the massive, loose, cascading arrangement Princess Diana carried when she married Prince Charles, Princess Kate's wedding bouquet was, shall we say, understated. The shield-shaped arrangement was wired together for a structured look and contained seasonal, local flowers like lily-of-the-valley and sweet William, in addition to myrtle, hyacinth, and ivy. And even though the names of the other royal wedding flowers were released pre-ceremony, Princess Kate's wedding bouquet components remained top secret.

Yes, it was all white, a traditional choice for a wedding bouquet, but these royal wedding flowers meant so much more than that. Here's what they symbolise.

Lily of the Valley: According to the Queen Victoria language of flowers, this delicate bloom means trustworthy, a good characteristic for any husband or wife to have. But some say this flower instead represents the return of happiness. Perhaps a nod to the shaky time in the royal couple's relationship when Prince William was caught on camera kissing other English birds?

Sweet William: This one technically stands for gallantry, which the royal family is clearing brimming with, but I doubt Princess Kate would've chosen this pretty, though garden-variety, bloom if her hubby didn't share a name with it. And how sweet is that?!

Hyacinth: Here's another with a double-meaning. The language of flowers says this one represents sport or play (the slim newlyweds do look rather sporty and playful, in comparison to other royals, at least), but others take this flower to symbolise the constancy of love, another crucial marriage quality (good choice, Kate).

Myrtle: It's royal tradition (and many others' tradition) to carry a sprig of myrtle in the wedding bouquet. In fact, every royal bride since Queen Victoria has played along and Kate was no exception. But her and other princesses' and queens' myrtle come from a very special place: Queen Victoria's own 170-year-old garden. Besides that significance, myrtle's special meaning is the emblem of love and marriage. What's more fitting than that?
​
Ivy: Here's another apropos addition. This too stands for marriage, and also fidelity, friendship, and affection.
The groom, too, often wears a flower that appears in the bridal bouquet in his button-hole. This stems from the Medieval tradition of wearing his Lady’s colours, as a declaration of his love.
There is a language, little known,
Lovers claim it as their own.
Its symbols smile upon the land,
Wrought by nature’s wondrous hand;
And in their silent beauty speak,
Of life and joy, to those who seek
For Love Divine and sunny hours
In the language of the flowers.
The Language of Flowers, London, 1875

A comprehensive guide to the meanings of herbs,
​flowers and other plants.