A look at the major festivals of Japan.

Japanese traditional festivals are called ‘matsuri’ and each has a long history. They are powerful, energetic, exciting and enjoyable and everybody is welcome to participate.

There are more than 300,000 traditional matsuri and they are very different from area to area. Normally they are sponsored by a local shrine or temple and are organised by the local community. In most, people wear a specific costume relevant to that particular festival and carry a heavy ‘mikoshi’, a portable shrine, around the streets, hoping it will bless the town and its people.

If you’re planning a trip to Japan after the Pandemic travel bans have been rescinded, you might like to check some of the major festivals below to see whether any coincide with your visit, as they will provide an unforgettable experience of local culture.

KANDA MATSURI, Tokyo
​Kanda Matsuri is one of the most famous festivals in Tokyo and is a festival for the Kanda Myojin Shrine. The main action happens during the middle of May. The portable shrines, called Mikoshi, are accompanied by about a thousand people, and after they leave the Kanda Myojin Shrine in the morning, the parade continues through the Kanda district, Nihonbashi and Akihabara and returns to the shrine in the evening. But be aware, the festival only happen in odd years, 2021, 2023, 2025 for example. 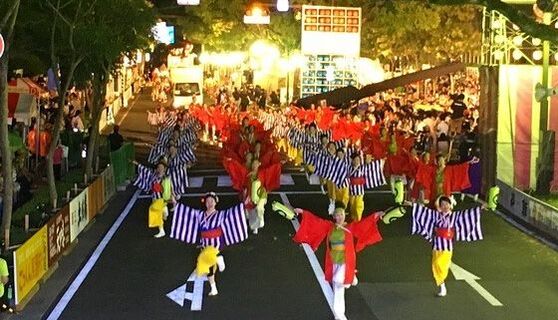 ​The dance is based on their old folk song, called "Yosakoi Bushi." People dance passionately with the uptempo music, carrying clappers called "Naruko" which make a click-clack sound. It takes place during the middle of August. 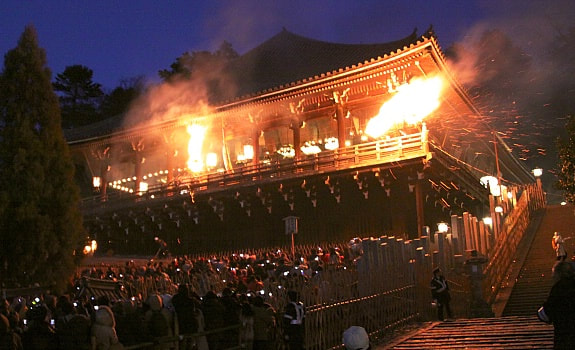 OMIZUTORI, Nara
​​Omizutori is the commonly used name for Shunie, a series of events held annually from March 1 to 14 at ​Todaiji Temple, in Nara This collection of Buddhist repentance rituals has been held every year for over 1250 years, making it one of the oldest Buddhist events in Japan.
Among the many different events held during Omizutori, Otaimatsu is the most famous and spectacular. Just after sunset on every night from March 1 through 14, giant torches, ranging in length from six to eight meters, are carried up to Nigatsudo's balcony and held over the crowd. The burning embers, that shower down from the balcony, are thought to bestow the onlookers with a safe year.
The size of the torches and the duration of Otaimatsu vary from day to day. On most days, ten medium sized torches are brought up to and carried across the balcony one after the other, and the entire event lasts about twenty minutes, while the audience stands in the courtyard below the wooden temple hall.
Along with the thousands of local matsuri, there are festivals that are celebrated across all of Japan. 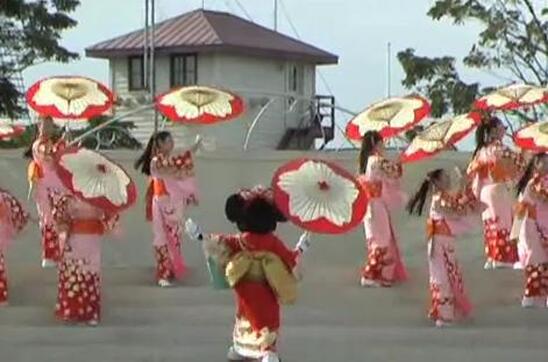 ​SHOGATSU
​Shogatsu, the Japanese New Year celebration, falls on the familiar date of January 1 per the Gregorian calendar, but the celebration in Japan is stretched out days before and after. It's considered one of the biggest festivals in Japan.

Shogatsu is observed by enjoying many traditional foods that vary between regions in Japan. Many people start the new year by eating soba (buckwheat) noodles at midnight for good health. At dawn, the Emperor of Japan prays for the nation.

Unlike in the West where the celebration revolves around New Year's Eve revelry and short-lived resolutions, Shogatsu focuses on bringing prosperity in the upcoming year — beyond just hangover recovery. At midnight, Buddhist temples ring bells 108 times (the estimated number of worldly sins/desires).
​
Much like Chinese New Year, special food is prepared and money is given to children in small envelopes. Reunited families spend time together and play games. The general sentiment is about new beginnings and setting the stage for prosperity.

On January 2, the public gets a rare treat only granted twice per year: access to the inner palace grounds in Tokyo. The only other day that the public is allowed inside the gates is on December 23 for the Emperor's Birthday celebration.
​
Many businesses remain closed until at least January 3. A smaller celebration known as Coming of Age Day takes place on January 9. 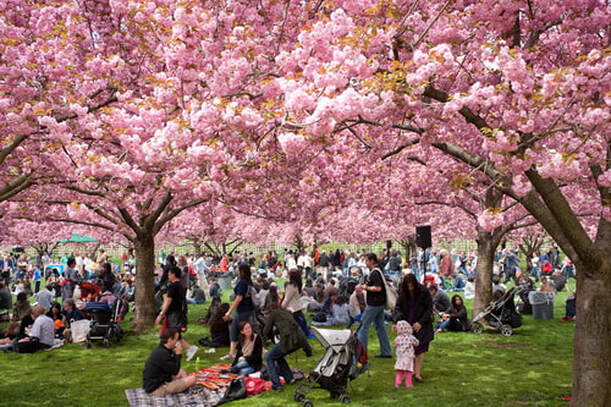 HANAMI The Cherry Blossom Festival
​​An ancient tradition, the word hanami actually means "flower viewing" and that's exactly what thousands of people do during the spring Cherry Blossom Festival. What could be more enjoyable than sitting under beautiful blooms with food and drinks?
Families, friends, and co-workers compete for quiet spots in busy parks to enjoy picnics and parties. Events happen day and night. A little revelry takes place beneath the blooms that are celebrated for their fleeting, impermanent nature.
Tea ceremonies are held under trees; folk songs, traditional dances, beauty pageants, and even parades add to the festive atmosphere.
Because cherry blossoms are beautiful and fleeting—the blooms often last no more than two weeks—they have become symbolic of the impermanence of beauty. Cherry blossoms are often featured in works or art and even tattoos to depict the Japanese concept of mono no aware, the wistful realization that "nothing lasts forever." 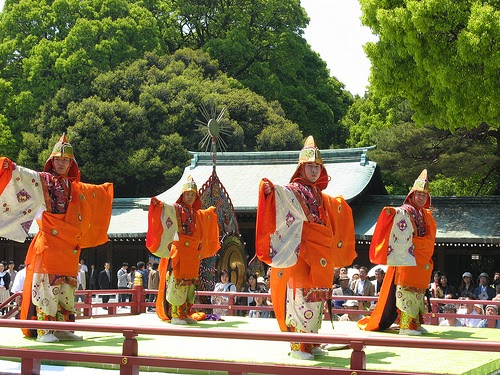 GOLDEN WEEK
​If there's one big holiday in Japan to plan around it is Golden Week! Fail to do so and you could find yourself spending much of your trip waiting in queues.

Golden Week is the busiest time to travel in Japan — it's not just a little busy but very busy. Four different, back-to-back Japanese festivals hit just as spring weather is turning pleasant. Japanese people take advantage by planning vacations; hotels, flights, and ground transportation fill up. Many businesses close for at least a week. Shrines and attractions in popular cities become very busy.

The first holiday of Golden Week is Showa Day on April 29, the observance of the birthday of Emperor Hirohito. It is considered a time to reflect on that turbulent part of Japan's past. Constitution Memorial Day hits on May 3 and is followed by Greenery Day on May 4 then Children's Day on May 5.
​
Although each of the public holidays during Golden Week aren't big events by themselves, combined they provide a good opportunity for local residents to close shop and take some time off. 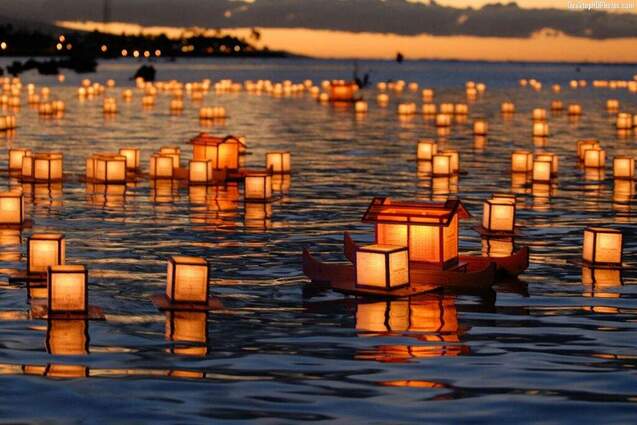 OBON
​​Although technically not an official national holiday, Obon (sometimes just bon) is the most widely observed of Japanese festivals in the summer.

Obon is a three-day celebration of ancestors' spirits that come home to rest. People visit shrines, temples, and family graves during Obon. Fires are lit in front of homes and lanterns help guide the spirits. Much like the Hungry Ghosts Festival observed in other parts of Asia, Obon is about keeping spirits happy in the afterlife.

Obon is an important time for families; many head back to their ancestral homes, causing long transportation delays and some business closures. Shrines will certainly be busier during Obon.

Traditionally celebrated at the end of Obon Toro Nagashi sees thousands of lanterns set afloat at dusk to commemorate the souls of the dead. The resulting scene is a spectacular play of light and dark as the lanterns’ glow slowly fades into the distance.

In terms of the most observed celebrations in Japan, Toro Nagashi is second only to New Year’s Eve, and Japanese people will typically take time off work to travel home and participate. Toro Nagashi can be a smaller family affair to remember lost loved ones or a much bigger event at which those who have been lost to natural disasters or war are commemorated. 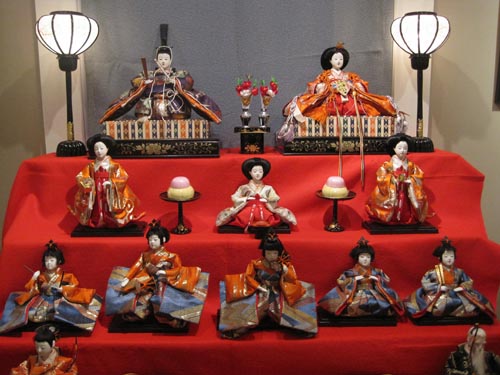 HINA MATSURI The Doll Festival
​Also known as Momo-no-sekku, “peach blossom fete”, this festival occurs on March 3rd. Ceremonial dolls, often valuable family heirlooms, are displayed in the best room in the house. Such dolls, clothed in ancient formal costumes, are often bought on the birth of a girl, or given by relatives or friends. In some areas, the festival maintains its original theme of exorcism: symbolic dolls are loaded up in boats and sent out to sea, with the prayer that all bad luck, impurities and evil spirits should be transferred from girls to the dolls which are floating away. Peach blossom, flowering at this time, is also displayed as a symbol of feminine qualities, and of marital bliss. Special foods eaten at this festival include hishi-mochi (diamond-shaped rice cakes), shiro-zake (ground rice and sweet sake) and sekihan (rice boiled with red beans). 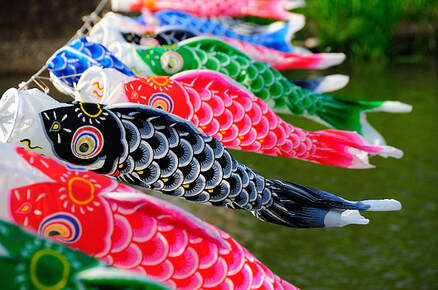 KODOMO-NO-HI The Boys Festival
​Occuring on May 5th, it is also known as shobu-no-sekku and tango-no-sekku (from the iris (shobu) plant). Its origins lie in the distribution of medicinal irises as protection against illness, over time it has become a day to pray for healthy boys. Families fly carp banners – one for each son – supposedly because this fish has the energy and power to fight its way up swift-running streams; because of its strength and determination to overcome all obstacles, it is held up as a good example to growing boys of ambition, strength and perseverance.