Malta has one of the oldest continuous histories with cultural input from the Phoenicians, Romans, Greeks, Normans, Sicilians, Swabians, Arogonese, Castilian, the Knights of St John, and the British. 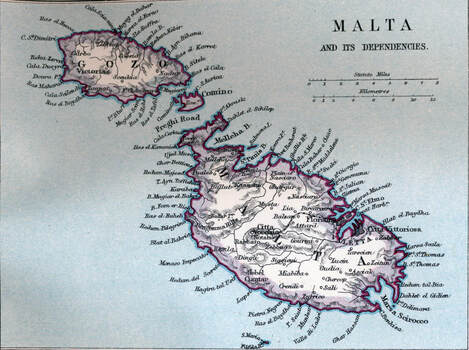 The nation became independent in 1964 and became a republic in the British Commonwealth in 1974.

​The Maltese archipelago consists of Malta, Gozo, Comino, Cominotto, and Fifla, plus a few minute limestone outcroppings. Over 92 percent of the inhabitants live on Malta, by far the largest island, and the rest live on Gozo except for a few farmers on Comino.

The Grand Harbour of Malta is dominated by Valletta, the national capital, whose construction was begun by the Knights of Saint John in 1566, a year after the defeat of the Great Siege by Ottoman Turkey.

Saint Paul is a powerful national symbol, as he is credited with converting the Maltese to Christianity. It is symbolic that the Maltese, under theocratic governance, fought in Crusades long after most other Europeans had abandoned them. Other symbols are Roman Catholicism, the Maltese cross, a strong European identity, and a siege mentality. Not only did Malta persevere during the Crusades, it was victorious against the Turks in 1565 and survived intense bombardment during World War II. Dolphins are also a national symbol.

Megalithic temples that predate the Egyptian pyramids, Bronze Age archaeological sites, Phoenician inscriptions, and Roman catacombs all contribute to a sense of nationhood. Maltese place particular emphasis on the nation that emerged after Christian conversion.

Gostra
Feasts
Local festivals celebrating the patron saint of the local parish, similar to those in southern Italy, are commonplace in Malta. Several festi take place in different towns and villages across Malta every weekend in the summer. A festa reaches its apex with a High Mass featuring a sermon on the life and achievements of the patron saint, after which a statue of the religious patron is taken around the local streets in solemn procession, with the faithful following in respectful prayer. The religious atmosphere quickly gives way to several days of revelry, band processions, fireworks, and late night parties.
In the weeks leading up to a local festa, the main streets around the parish are richly decorated, with brocade banners, ornate religious sculptures mounted on pedestals and, all around the zuntier (parvis) of the parish church, hawkers set up stalls stocked with food and the local variety of nougat. The parish church itself is typically illuminated at night, although the fjakkoli (flaming lanterns) of yesteryear have been supplanted by bright-coloured electric bulbs.

Some of the seaside towns feature a unique and popular medieval game known as the ġostra. Although the word itself is derived from the Italian giostra, Maltese ġostra has little in common with medieval jousting, and is in fact derived from the Neapolitan game of the ​Cockaigne pole. It involves a 10-metre long greased pole, mounted on a barge out in the bay, perched on a precarious angle out over the sea. Competing youths scramble up the pole, in an attempt to snatch a pennant, flag or other trophy from the top of the pole.
Cultural influences
Around 700 BC Malta was inhabited by the Ancient Phoenicians, who were particularly interested in the use of the various harbours and ports around the Maltese islands that were easily accessible. Within around two hundred years (500 BC) Malta had become a Punic colony and Phoenician traces are still found today in Maltese culture, traditions and language.

Malta was under Roman control between 218 BC and 395 CE. During the later part of Roman rule, Malta had the power to control domestic affairs and were allowed their own currency. The famous shipwreck of St. Paul took place during this period, and it is St. Paul who brought Catholicism to the Maltese and founded the Church of Malta, laying the foundations for religion as part of Maltese culture.

When the Roman Empire fell in 395 CE, Malta was placed under the eastern portion of the old Roman Empire, which was ruled from Constantinople. This change in ruling brought several Greek families to Malta, introducing various traditions, proverbs and superstitions some of which are still present in the Maltese culture of today.
The Arab invasion of 870 CE left a mark on the Maltese people and their culture. The ruthless Arab oppressors of the time are said to have had a devastating effect on the population of the Maltese islands. Some historians speculate many Maltese were killed during and after the invasion, and that others were carried off into slavery or fled to Sicily, amongst other places. Malta is said to have been merely left a resource of food and timber for the Arab invaders, leaving the islands scarcely populated. At around 1090, the Norman invasion saw an end to Arab rule and Malta’s population is said to have amounted only to no more than 1,200 households, the larger part originating from the wider Arab world. The effects of the Arab invasion are still visible in the names of many Maltese towns and villages (in the case of Mdina, ‘medina‘ means “city”) and in the spoken form of the Maltese language.

During the rule of the Knights of St. John (also known as the Knights of Malta), the population of Malta increased significantly, from around 25,000 in 1535 to over 54,000 in 1632. One of the primary reasons was an improvement in health and welfare, but also immigration from Western Europe.

​This period, under the rule of the Knights of St. John, is often referred to as the Golden Age for Malta, considering the flourishing of Maltese culture with the architectural and artistic embellishment witnessed during the Knights’ rule. The various advances in overall health, education and wealth of the Maltese are also an important part of this perception of Malta’s Golden Age.

The Knights introduced Renaissance and Baroque architecture in Maltese towns and villages, which is still evident in many places of interest, most notably the capital city Valletta and the Valletta Grand Harbour. In education, the Knights laid the foundation of the present-day University of Malta, which as a result is one of the oldest extant universities in Europe.

In 1798, Malta fell under French rule after the Knights surrendered Malta to Napoleon Bonaparte’s forces. At that time, the population of Malta was recorded being at 114,000.

Although the period under French rule was rather short (1798-1800), the impact on Maltese culture was significant. Some French customs and expressions were introduced into every day Maltese language: Words such as bonġu (“good day”) and bonswa (“good evening”) are still used today. Malta was given a Constitution within six days by Napoleon, slavery was abolished, a secondary school system established, the university system was revised almost completely and the legal system of Malta was enhanced by a new Civil Code of law.

French rule did not only bring improvements to Malta and its people, however. Maltese churches were ransacked, being robbed of gold, silver and precious art, which sparked an uprising that ended in the execution of a number of Maltese patriots.

Maltese culture, language and politics underwent further radical changes under British rule, from 1800 to 1964. The addition of Malta to the British Empire was a voluntary request made by the Maltese people in an attempt to rid the Maltese islands of the French. Its strategic location in the centre of the Mediterranean made Malta an excellent station for British forces, whilst the opening of the Suez Canal further improved the importance of Malta as a supply station and naval base.

While British rule ended in 1964, its traces and influences in Maltese culture are still visible. Maltese versions of English words are often used in more formal language, while the more wealthy families often use English as the primary language in the household and in some instances children are brought up without being taught Maltese.
​
Many remnants of British rule still remain with the most obvious examples mail collection boxes and phone boxes, still in their original positions.