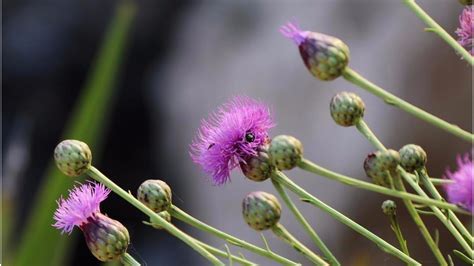 From May to July in Malta a very special flower makes an appearance... the pretty pinky-purple puff of the Maltese rock-centaury, Malta’s national flower, of which there is an estimated wild population of just 1,000 plants.

The Maltese rock-centaury is characterised by a pinky-purple puff made up of several tiny flowers sitting in a cluster on a long stem. Cheirolophus crassifolius, the Maltese rock-centaury, is from the Asteraceae family. It is endemic to Malta, and has been the national flower since 1973 and is known locally known Widnet il-Baħar, which curiously translates as “the ear of the sea.”

For the botanical buffs among us, the flower is a capitulate head composed of 5-6 rows of involucral bracts and a top of numerous tubular florets having a characteristic purple colour. The name Cheirolophus means hand-crest, referring to the hand-shaped bract tips of the most species in this genus, while crassifolius mean thick leaves. The leaves are succulent and spoon shaped. 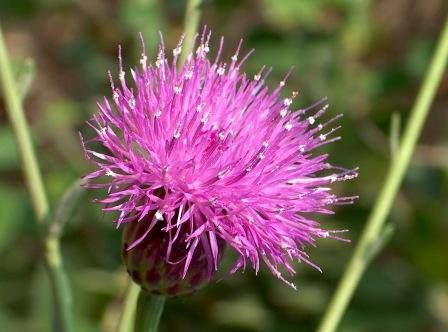 But these very pretty flowers are not to be picked as they are rare in the wild due to loss of habitat and human activity including quarrying and urban development. So the Maltese rock-centaury is classified as Critically Endangered and is therefore protected.

Invasive plant species and insects also threaten wild populations. Thankfully, the threat of extinction is being well managed, with seedlings cultivated for reintroduction and currently used for plantings on roundabouts. It also grows in conservation areas such as the Fungus Rock.

A walk along the western cliffs and coastal valleys of Malta is where you’ll most likely see them in the wild. Scan the coastal limestone cliffs and scree in full sun, as that is where the Maltese rock-centaury likes to grow.
​