Korean mythology consists of national legends and folk-tales
​which come from all over the Korean Peninsula. 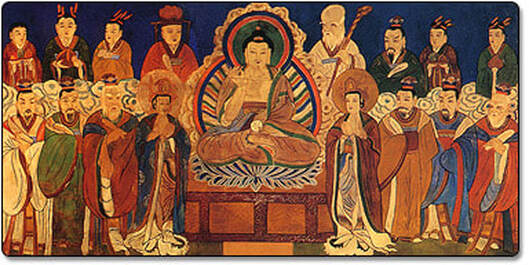 Korean Buddhist mural.
The original religion of Korea was a form of Eurasian shamanism and the totemism of Far East Asia, specifically of the nomadic peoples of present-day Manchuria. These were strongly colored by the later importations of Buddhism, Confucianism and Taoism from China.

During the early ages, when Buddhism was on the rise, Korean shamanism was widely discredited in an attempt to establish Buddhism as the state religion. In later years both Korean Buddhism and shamanism were heavily purged, almost to the point of being lost from the consciousness of the general population.

After the Korean War in 1953, shamans came to be seen less as religious figures and more as charlatans willing to exploit people for money. Recently, however, there has been a substantial revival movement reclaiming this element of Korean culture.

Although the society is suffused with Confucian values and customs, roughly half of South Koreans today identify themselves as non-religious, a quarter as Christians, and another quarter as Buddhists. 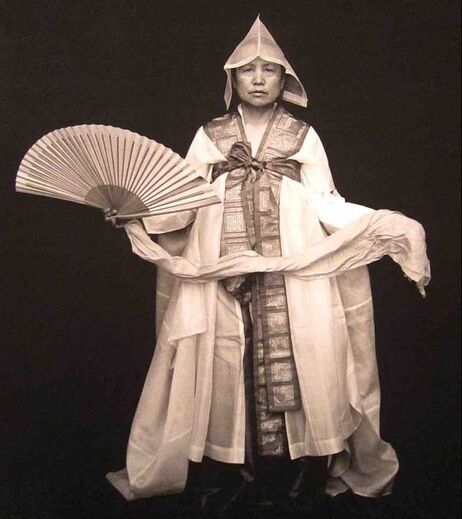 A Korean shaman from the 1930s.
Today, those believing in the indigenous Korean myths as a religion form a minority. Among them are the followers of Chondogyo and Daejonggyo, who worship Dangun as a god, in addition to several rural areas where shamanism has managed to survive.

Korean creation-mythology, or cosmology has many variations depending on the source, but can be generally separated into one of the following three categories: totemic/shamanistic creation mythology, Taoistic cosmology, and Buddhist-influenced cosmology.

The Mudang acted both as a story-teller and a shaman, and usually the legends seemed to involve an attempt to justify the powers of the Mudang or to explain the origin of a certain clan.

Screen depicting the Korean creation myth.
Creation of the world
At the beginning the world did not exist. A deity named Yul-ryeo and a goddess named Mago appeared. Yul-ryeo then died. Mago in turn gave birth to two goddesses: Gung-hee and So-hee They in turn each gave birth to two Men of Heaven and two Women of Heaven.

After the appearance of the Heavenly People, Yul-ryeo is revived and through her rebirth heaven, earth, and the oceans were created, along with Ki (soul). These four elements in turn mixed and became herbs and plants, birds and animals.
​
Mago decided to stay with Yul-ryeo, whose body had now become the world, and the Heavenly People ruled all living things from their heavenly fortress named Magoseong in honour of the goddess. 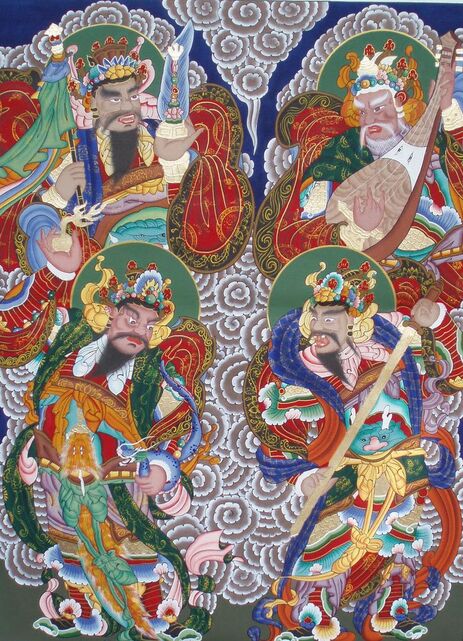 These ancestors were pure and were have said to drink from Earth's Milk which came from a spring inside the castle. They could speak without making sounds, and act without seeing and never died. Thus they lived for ten thousand years undisturbed.
​
Then there came a time when the number of people became too large. There was not enough of Earth's Milk, or Jiyu, to go around for everyone. Because of this, a man from the line of Baekso by the name of Jiso decided to cede his meal of Earth's Milk five times to his neighbours. Eventually his hunger grew intolerable and, deciding to kill himself, he headed towards a cliff, where he saw a grape vine growing in the edges. Unable to suppress his hunger, he ate the grapes and immediately acquired the five tastes of sourness, bitterness, spiciness, sweetness, and saltiness.

​Jiso returned to his people and told them of his discovery. Soon however, those who ate from these grapes began to grow teeth. From the teeth spewed a saliva that turned into venom. This was because they had eaten another living thing in order to stay alive.
Soon they were able to see, but were no longer able to hear the heavens. Their skin became coarse, their feet heavy, and they were no longer pure. They gave birth to many animal-resembling children and their lifespans began to shrink.

There eventually came a point when the people of Magosung  began blaming Jiso for the transformation, and he along with his family and all those who had eaten the grapes were forced to leave Magosung.

As Jiso’s people were leaving, however, Hwang-gung, one of the four guardians and a direct ancestor of the Korean people, tried to encourage them by saying that if they could recover their pure nature, they would be free of their misery.
​
Upon hearing this, the people became convinced that the only way to become pure once more was to drink from Earth's Milk again. They then stormed the castle and overwhelmed it, razing the fortress to its foundations in order to reveal the source of the spring that had given them Earth's Milk. The spring, however, began to flow in all directions and thereafter the milk turned into inedible earth, leaving not only the original perpetrators but all the former inhabitants of the now destroyed castle to starve. 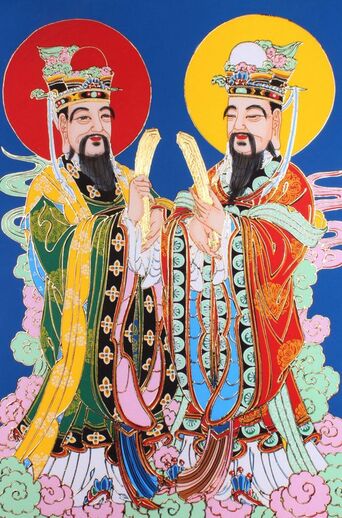 Sun and Moon deities.
Soon thereafter there ensued a massive famine, and everyone was reduced to devouring not only grapes, but all sorts of plants and even animals in an attempt to satiate their hunger. Of them only Hwang-gung came to Mago and begged her for forgiveness. He swore he would not rest until mankind could recover its pure nature. From her he obtained the Three Heavenly Heirlooms, and great knowledge. He then called together all the people of the earth, taught them agriculture, and gave each clan leader a Heavenly Heirloom and then sent them off in different directions to people the earth.
​
Cheong-gung went to the East, where he established China.
Baekso and his people moved to the West and became the people of Europe and the Middle East.
Heukso moved to the South, into the region that is now India and Southeast Asia.
Hwang-gung took three thousand followers and they alone went to the harsh North, to a place called Cheonsanju meaning "land of the heavenly mountain" where the land was cold and ​dangerous. He had done this on purpose, because he wanted to be purified once more.

​​Hwang-gung ruled for a thousand years, using the Heavenly Heirloom, which granted him power over fire and the sun, eventually achieving his goal of self-purification. To his oldest son Yuin he gave the Heavenly Heirloom as a sign of his right to govern the kingdom, whereas to his two younger sons he gave the responsibility of governing over a province each. He then departed to the Heavenly Mountain where he became a stone that could speak Yul-ryeo's message, constantly reminding men of their path to innocence.
Yuin ruled for another thousand years. Using the Heavenly Heirloom, he taught his people how to tame fire and cook food. He later left for the Heavenly Mountain as well and gave the heirloom to his son, Han-in. Han-in was the last of the heavenly rulers, who used the power of the Heirloom to bring abundant sunlight and good weather. Under the three thousand years of peaceful reign since Hwang-gung the people eventually lost their animal-like appearance and slowly began recovering their image.