Korean gardens are natural, informal, simple and unforced, seeking to merge with the natural world. They have a history that goes back more than two thousand years, but are little known in the west. 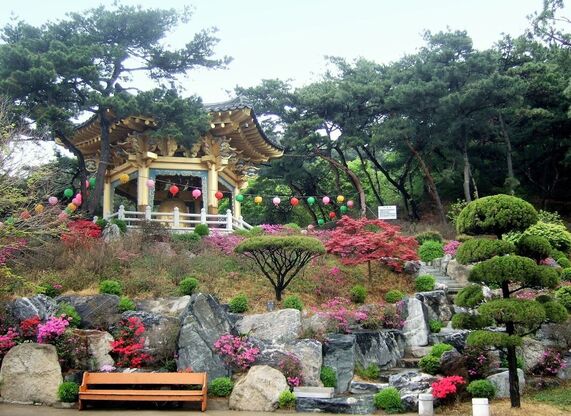 Heungryunsa Temple Garden
The oldest records date to the Three Kingdoms period (57 BC – 668 AD. In recent years, 300 documents have been found, written during the Koryo (918–1392) and Choson (1392–1910) dynasties, that contain detailed records about traditional Korean gardens, many of which survive and can be visited today.

In prehistoric times, Koreans worshipped nature, the sun, stars, water, rocks, stones, and trees. They especially believed that rocks had more power than water and other things in nature. Also, they believed that rocks engendered God's good-will. Therefore, the arrangement of rocks is considered as one of the "essential" elements in designing a traditional Korean garden.

In recent years, there has been a revival of interest in Susok or "rock arrangement" gardens that express the ancient concept of a round heaven and square earth. Even during the primitive agricultural period, stones were an essential element in building gardens, then rock arrangements for shamanic rituals were built in the shape of shrines or altars.

During the Three Kingdoms period (57 BC – 668 AD), palace gardens were erected on a grand scale with stones. And in the 4th-century temple gardens were introduced along with Buddhism. Since the early Koryo dynasty gardens evolved into the style of Hwagye or “terraced rock garden” which evoked “Son” or Zen Buddhist rock arrangements. In the middle of the Koryo period, a new style of stone garden, called Imchon became popular. These contained a pavilion and a stone pond in beautiful forest surroundings. 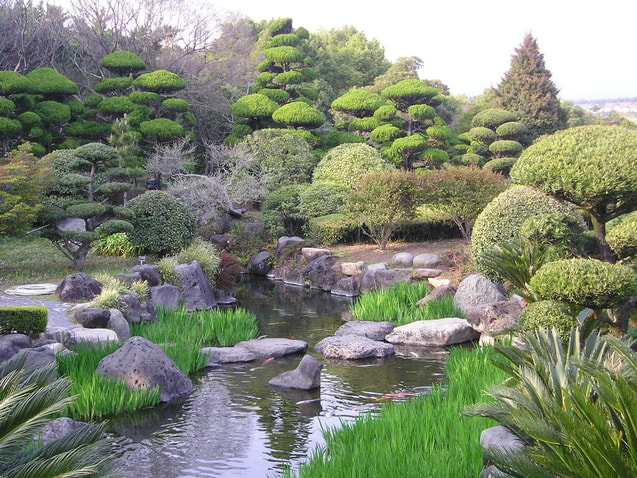 Style and symbolism
Korean gardens are structured to live in harmony with pre-existing landscapes. Sites are chosen in favor of the energy flow called pungsu which affects all aspects of life including health, wealth, and happiness.

Unlike gardening styles of the west, the construction of a Korean garden must be done with as little disruption to the pre-existing site as possible, and often incorporates the surrounding view, such as mountains on the horizon. The gardens can be found enclosed within walls of stone or brick or can blend seamlessly into its surroundings without a barrier.

Buildings and pavilions in the gardens are minimal in number and unobtrusive in the natural landscape. Flowers hold great symbolism and the Sacred Lotus and plum blossoms, are painted onto Buddhist temples, royal tombs and palace pavilions in a style called dancheong , or “red and blue/green.”
Rocks: The symbolism of rocks can be found in their number and structure, for instance, three rocks in an arrangement can represent the three mountain gods in the Dangun creation story. Rocks appear in twos, threes, nines, or twelves, although there are occasional extravagant arrangements of sixty. Rocks can be selected and assigned special names either based upon their appearance, or some unconnected meaning, however, no stones are brought from far away.
​Ponds: Ponds symbolize tranquility and stillness inviting deep contemplation from visitors. Their bridges can symbolize moving from lower thought processes to more sacred thoughts, or the movement from life on Earth into the tranquil afterlife. The Daoist and Confucian belief that heaven is round and the Earth is square is often reflected in the appearance of ponds and their island; the pond being square in shape and the island being round. Few Korean gardens are considered complete without at least one pond.
Water: Water is an important element to any garden for practical reasons such as plant watering and cooling the temperature it was also important in olden days because it prevented the wooden buildings of Korea from burning down. In the garden, a murky green color is prized, unlike the Western love of blue water. Sometimes the water looks black if the inside of the pond is walled with stone blocks.
​
The layout tends to follow natural courses, and unlike the traditional Chinese garden, straight paths are disdained. Significant or important elements tend to face east. A Korean garden is designed to attract various birds and animals are important to the natural appeal of the garden, so stone animals and animal motifs were common as well as actual fish, birds, and other creatures.
Some of Korea’s more famous gardens 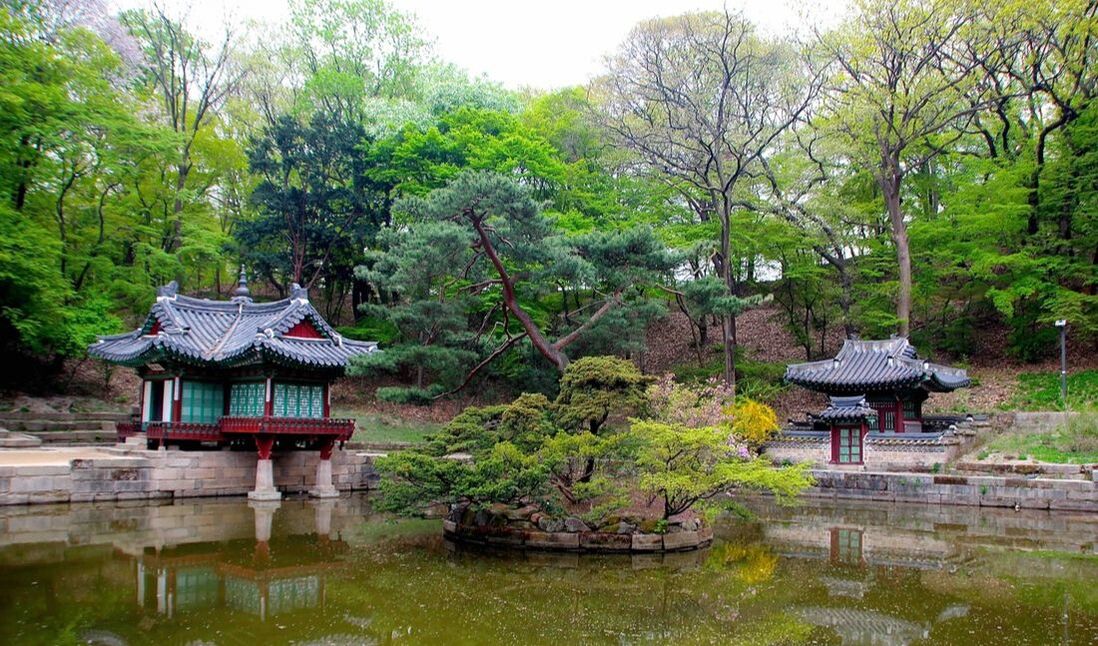 Changdeokgung's 'secret garden'
Changdeokgung Palace
Some 600 years ago, when the city was first established, it was the Joseon dynasty who were the patrons of garden designers. A key creation from that royal era is the Huwon, a serene and rustic glade nestling behind the World Heritage-listed palace Changdeokgung. The garden, focused around a square lily pond overlooked by a viewing pavilion in which kings and courtiers once read and wrote poetry, is also known commonly as Biwon, meaning 'secret garden'. 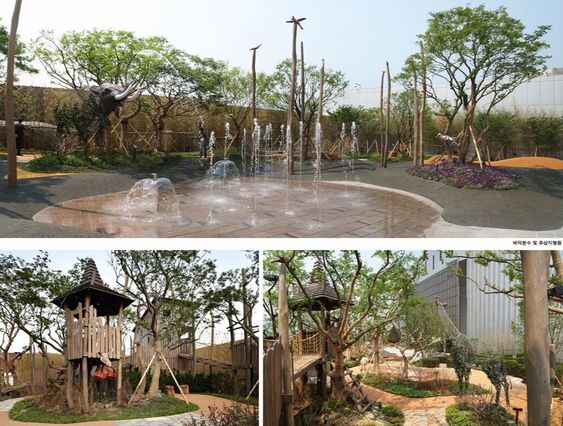 Shinsegai
The Huwon is not Korea's only hidden oasis. A 20 minute subway north of Seoul in the suburban district of Uijeongbu, Secret Garden (or S Garden) is an outdoor terrace tucked away on the 9th floor of the department store Shinsegae.

Designed by the Seattle-based firm Olson Kundig, this charming, family-orientated garden is planted with native greenery and scattered with many sotdae, traditional wooden carvings of birds.

​Other whimsical elements include animal sculptures crafted from wood and found-metal parts by the artist Do-Ho Suh, a sandbox in which kids can dig up fake fossils and a tree house in the shape of a giant bird's nest.