... and how it went global.  No country takes its fluffy pop music more seriously than South Korea. 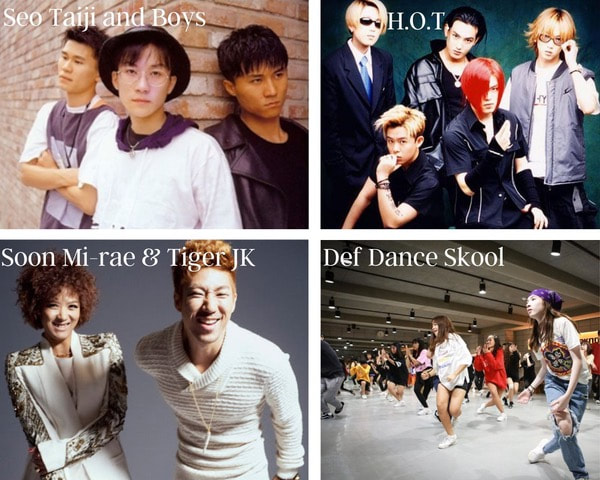 K-pop (short for Korean pop) is a genre of popular music originating in South Korea. It is influenced by styles and genres from around the world, such as experimental, rock, jazz, gospel, hip hop, R&B, reggae, electronic dance, folk, country, and classical on top of its traditional Korean music roots.
The more modern form of the genre emerged with the formation of one of the earliest K-pop groups, Seo Taiji and Boys, in 1992. Their experimentation with different styles and genres of music and integration of foreign musical elements helped reshape and modernize South Korea's contemporary music scene.

Modern K-pop "idol" culture began with the boy band H.O.T. in 1996, as K-pop grew into a subculture that amassed enormous fandoms of teenagers and young adults. With the advent of online social networking services and Korean TV shows, the current spread of K-pop and Korean entertainment, known as the Korean Wave, is seen not only in East Asia and Southeast Asia, but also in Pakistan, Bangladesh, India, Latin America, North Africa, Southern Africa, the Middle East and throughout the Western world, gaining a widespread global audience.

The term "K-pop" became popular since the 2000s. The first known use of the term occurred on Billboard in the October 9, 1999 edition at the end of an article titled "S. Korea To Allow Some Japanese Live Acts" by Cho Hyun-jin, then a Korea correspondent for the magazine, which used it as a broad term for South Korean pop music.  Previously, South Korean pop music was called Gayo.

The importance of Audio-visual content is paramount and many consider K-pop as an all-encompassing genre exhibiting a wide spectrum of musical and visual elements. The French Institut national de l'audiovisuel defines K-pop as a "fusion of synthesized music, sharp dance routines and fashionable, colourful outfits". Songs typically consist of one or a mixture of pop, rock, hip hop, R&B, and electronic music genres. 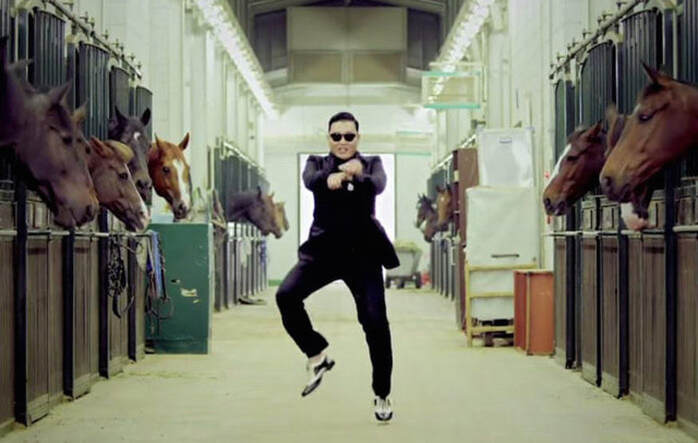 Psy ‘Gangnam Style’, released July 15, 2012
Who could ever forget Psy's "Gangnam Style" music video was the first YouTube video to reach one billion views, achieving widespread coverage in mainstream media. As of April 2019, the video had 3.3 billion views.

Management agencies in South Korea offer binding contracts to potential artists, sometimes at a young age. Trainees live together in a regulated environment and spend many hours a day learning music, dance, foreign languages, and other skills in preparation for their debut. This "robotic" system of training is often criticized by Western media outlets. In 2012, The Wall Street Journal reported that the cost of training one Korean idol under SM Entertainment averaged US$3 million.
​
Hip-hop artist Yoon Mi-rae and her husband, rapper Tiger JK of Drunken Tiger, are credited with popularising American-style hip hop in Korea and thus introducing the importance of English in lyrics.

Jin Dal Yong of Popular Music and Society wrote that the usage may be influenced by "Korean-Americans and/or Koreans who studied in the U.S. [who] take full advantage of their English fluency and cultural resources that are not found commonly among those who were raised and educated in Korea." Korean pop music from singers or groups who are Korean-American such as Fly to the Sky, g.o.d, Rich, Yoo Seung-jun, and Drunken Tiger has both American style and English lyrics. Increasingly, foreign songwriters and producers are employed to work on songs for K-pop idols, such as will.i.am and Sean Garrett. Foreign musicians, including rappers such as Akon, Kanye West, Ludacris, and Snoop Dogg, have also featured on K-pop songs.

K-Pop Marketing is a fascinating process. Many agencies have presented new idol groups to an audience through a "debut showcase", which consists of online marketing and television broadcast promotions as opposed to radio. Groups are given a name and a "concept", along with a marketing hook. These concepts are the type of visual and musical theme that idol groups utilize during their debut or comeback. Concepts can change between debuts and fans often distinguish between boy group concepts and girl group concepts. Concepts can also be divided between general concepts and theme concepts, such as cute or fantasy. 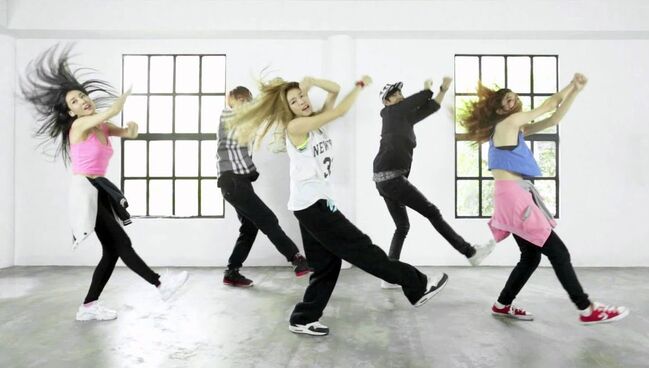 Dance is an integral part of K-pop. When combining multiple singers, the singers often switch their positions while singing and dancing by making prompt movements in synchrony, a strategy called "formation changing" pop choreography  often includes the so-called "point dance", referring to a dance made up of hooking and repetitive movements within the choreography that matches the characteristics of the lyrics of the song.

The training and preparation necessary for K-pop idols to succeed in the industry and dance successfully is intense. Training centres like Seoul's Def Dance Skool develop the dance skills of youth in order to give them a shot at becoming an idol. The entertainment labels are highly selective, so few make it to fame. Students at the school must dedicate their lives to the mastery of dance in order to prepare for the vigorous routines performed by K-pop groups. This, of course, means that the training must continue if they are signed. Companies house much larger training centres for those who are chosen.

Fashion also became a huge part of the K-pop scene with the emergence of Seo Taiji and Boys in 1992 paved the way for the development of contemporary K-pop groups incorporating rap and American hip-hop conventions into their music. This adoption of Western style extended to the fashions worn by the boy band: the members adopted a hip-hop aesthetic. To begin with, outfits included vibrant streetwear such as oversized T-shirts and sweatshirts, windbreakers, overalls worn with one strap, overalls worn with one pant leg rolled up, and American sports team jerseys. Accessories included baseball caps worn backwards, bucket hats, and do-rags.

Further trends became sagging baggy pants, sportswear, and bandanas. Hip-hop fashion, considered the most popular style in the late '90s, remained, with idol groups H.O.T. and Sechs Kies wearing the style for their debut songs. The use of accessories elevated the idol's style from everyday fashion to performance costume, like ski goggles (worn either around the head or neck), headphones worn around the neck, and oversized gloves worn to accentuate choreography moves were widely used. H.O.T.'s 1996 hit "Candy" exemplifies the level of coordination taken into account for idol's costumes, as each member wore a designated color and accessorized with face paint, fuzzy oversized mittens, visors, bucket hats, and earmuffs, and used stuffed animals, backpacks, and messenger bags as props.

On the other hand, female idol groups of the '90s wore homogeneous costumes, often styled identically. The costumes for female idols during their early promotions often focused on portraying an innocent, youthful image. S.E.S.'s debut in 1997, "I'm Your Girl", and Baby Vox's second album 1998 hit, "Ya Ya Ya", featured the girls dressed in white outfits, "To My Boyfriend" by Fin.K.L shows idols in pink schoolgirl costumes, and "One" and "End" of Chakra presented individual and African style costumes. To portray a natural and somewhat saccharine image, the accessories were limited to large bows, pompom hair ornaments and hair bands. With the maturation of female idol groups and the removal of bubblegum pop in the late 1990s, the sets of female idol groups focused on following the fashion trends of the time, many of which were revealing pieces. 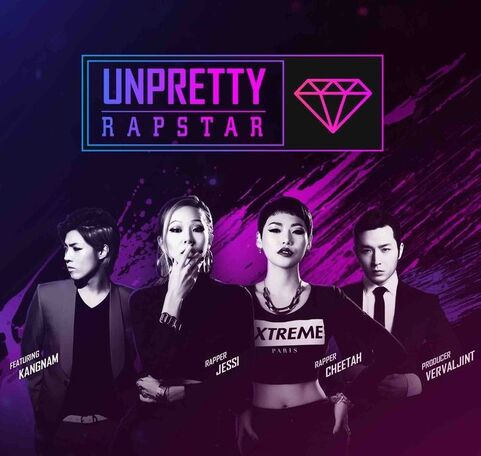 The Korean music industry has spawned numerous related reality and talent TV shows, including Superstar K and K-pop Star, specialist rap competition Show Me the Money and its female counterpart Unpretty Rapstar, and many 'survival' shows, which commonly pit trainees against each other in order to form a new idol group.

A unique feature of K-pop fandom is the "fan chant". When an idol group releases a new song, chants, usually consisting of group members' names, are performed by live concert audiences during non-singing parts of songs.

Other industries have emerged on the bandwagon, including K-Beauty and K-Fashion.

When K-Beauty shot into the mainstream, its fabled 10-step routine left people equally intrigued and exasperated. Traditionally, Korean women favour glowing 'glass' skin over layers of foundation, and a lengthy routine that focuses on clarifying, toning and layers of hydration allows them to achieve optimum luminosity.
​
K-Beauty is associated with the Korean Wave; for example, the South Korean cosmetics company Amorepacific sponsored My Love from the Star, a 2014 K-drama whose constant marketing of Amorepacific products resulted in an increase in skincare and lipstick products of 75 and 400 percent. The combination of increased international tourism in South Korea combined with K-Beauty products' presence in duty-free shops has also worked to increase sales of cosmetics in Korea. 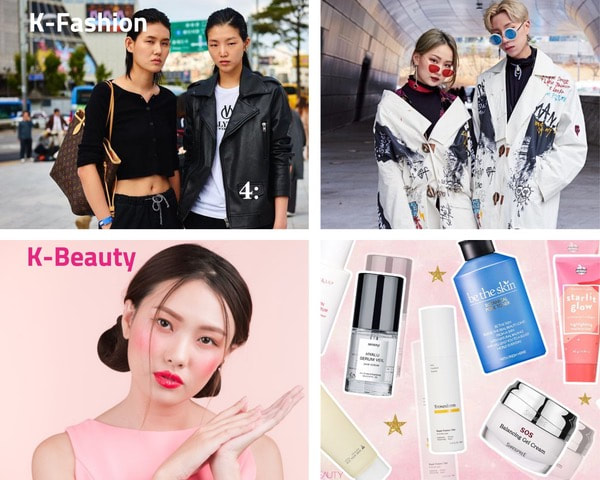 K-Fashion or K-Style, has become immensely popular both within and outside of the home country in recent years. With the growing popularity of K-Pop) and Korean dramas, Korean fashion and beauty has been readily consumed by young people worldwide, partly thanks to the rise of beauty bloggers and vloggers, other social media platforms, and the successful all-encompassing K-Pop festivals.
​
Since 2000 to the present, K-Fashion and K-Beauty products and culture continue to have an impact on the global market. Armed with smartphones and internet accessibility, the domestic and global consumer has access to Korean fashion and beauty products that show no signs of retreat in the competitive market.

​Online clothing stores and importation of name-brand items, along with the emergence of many indie designers, have pushed K-Fashion to the level that it is at today. Seoul is now competing with western fashion cities such as Paris and New York. It will be interesting to see where Korean fashion and makeup will go from here.