Art echoing nature.
The beauty of the Japanese garden. 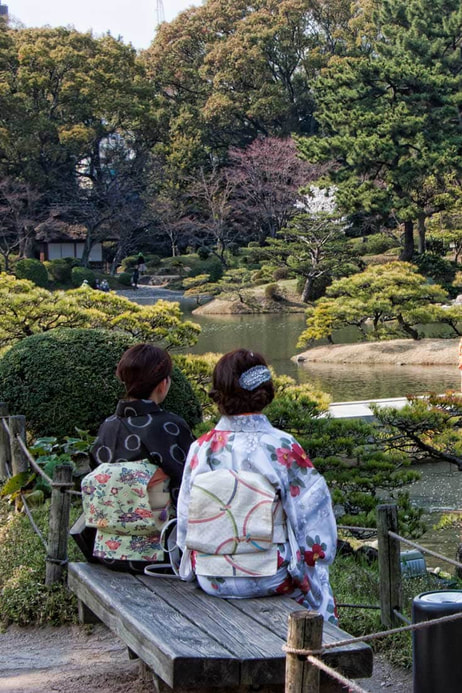 As places of quiet contemplation and reflection, Japanese gardens seem the perfect counterbalance to the stresses of an always-on, hyper-connected existence. These gardens highlight the beauty of nature, avoiding artificial, man-made components wherever possible. The first of these gardens began to be built on the island of Honshu around 600 A.D.
Japanese gardens also capture aspects of the traditional Shinto religion, as well as Daoism and Buddhism.

The gardens still attached to feudal castles or villas belonging to various noble families have been designed to create a series of perfectly composed landscapes made to look as if nature herself had produced them, the man-made features of hills, lakes and slopes seeming to have always been there.

Like the English gardens of the 17th and 18th centuries, they are designed to impress, providing different experiences and vistas across the seasons. Small tea pavilions, designed to provide the perfect setting for the famous tea ceremony, are often dotted around the garden at sites specially chosen to highlight a specific seasonal view.

Japanese rock gardens were first developed during the 8th century and often mimicked the gardens of China’s Song Dynasty. Tiny lakes and islands covered with moss and precisely manicured grasses and shrubs combined with larger rocks and gravel beds are intended to represent nature’s spirit on an intimate scale.

During the 14th century, Classical Zen gardens that were created in Rinzai Zen Buddhist temples began to showcase a simpler style incorporating large boulders and painstakingly groomed gravel. These rock gardens, also known as dry landscape gardens or karesansui, contain elements that are intended to represent larger landscapes and inspire meditation and contemplation. Large stones often represent mountains or mountain formations or even waterfalls, and the raked pebbles evoke waves, seas and oceans.

These gardens are meant to be experienced from various contemplation points around the space that present a series of perfectly composed vistas to the viewer. Here is a collection of Japanese gardens chosen for their historic significance as well as their beauty. Most are on the main island of Honshu and can be easily reached using a Japanese Rail Pass. 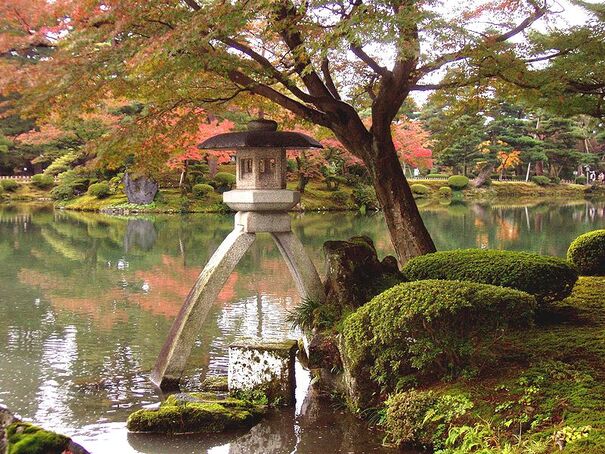 Kenroku-en, Kanazawa
Dating back to feudal times this garden was maintained for the lords of the Maeda clan.  Set on 11.4 hectares its size is impressive and showcases many of the features that define Japanese garden design. Kenrokuen means having 6 attributes and those are the 6 design elements sought after in a Japanese style garden.  They are space, tranquility, history, intrigue, the flow of water and great views. This garden features ponds and natural landscape features such as hills and streams, and structures such as pavilions and tea houses. 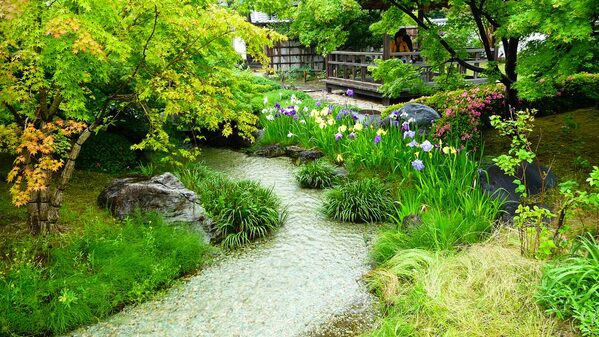 Koraku-en, Okayama
Called, the “garden of pleasure after,” Koraku-en is located in Okayama. This garden’s name is derived from a proverb of Confucius, in which he explained that a ruler should consider the needs of his subjects first, and his own “pleasure after.” Construction began in 1687, and the garden was opened to the public in 1884. The views across the garden taking in the Okayama castle in the background make this garden well worth the visit.  During cherry blossom season the garden has a beautiful grove that provides the perfect setting for hanami or blossom viewing parties under the sakura (cherry) trees. 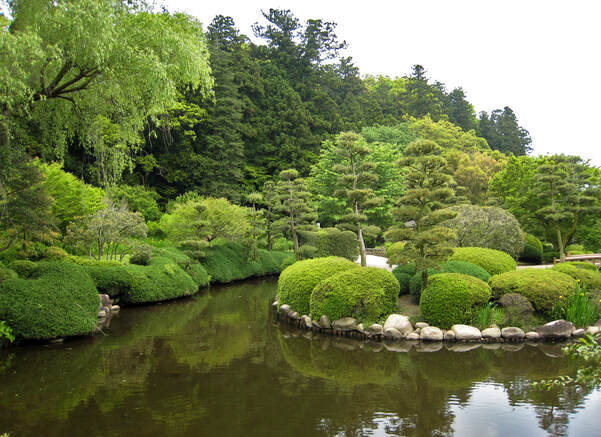 Kairaku-en, Mito
​Located in Ibaraki prefecture, Mito City is about 90 minutes from central Tokyo by fast train.  One of the interesting differences about this feudal age garden is that it’s always been open to the public, rather than being built for the exclusive use of the ruling lord as the other gardens have been.  While enjoyable in all seasons, Kairakuen is best known for its 3000 plum (ume) blossom trees which flower before the sakura or cherry trees.
​ 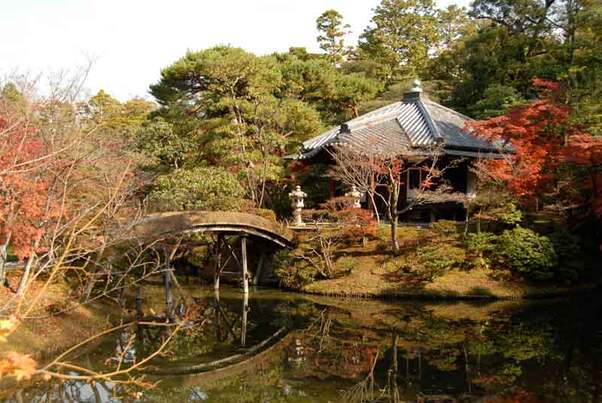 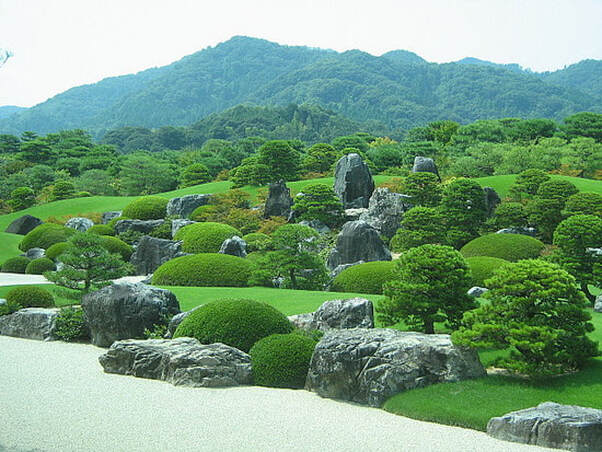 The Adachi Museum of Art, Yasugi, Shimane Prefecture
Home to six separate gardens, the Adachi Museum of Art’s landscapes are filled with plants and rocks that were carefully collected from across Japan by the museum’s founder, Adachi Zenko. Closely linked to traditional Japanese ink paintings, Zenko viewed these gardens as unrolled scrolls. The museum’s dry landscape garden combines a number of elements including shrubs and large rocks meant to represent a larger river landscape with a towering waterfall. 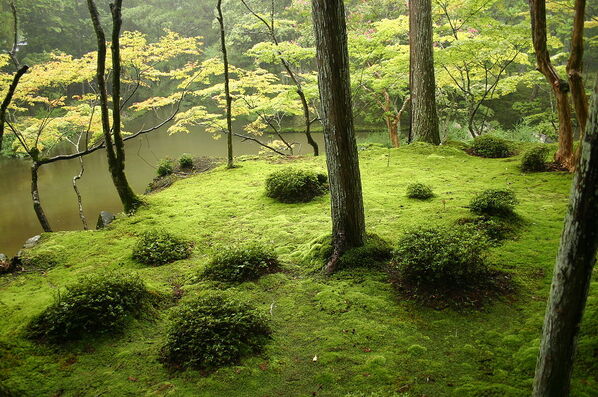 Saiho-ji, Kyoto.
Also known as the Moss Temple, Saiho-ji’s famous moss garden is an example of an early Zen garden. Created in the 14th century, the moss formed later when the temple went in to disrepair. The northern temple grounds also house a Zen rock garden, which was arranged by the famed Japanese rock gardener, Muso Soseki. 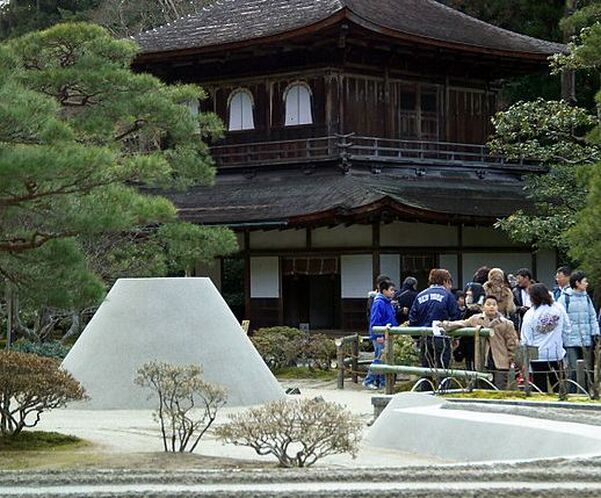 Ginkaku-ji, The Silver Pavilion, Kyoto
Located on the edge of the eastern mountains of Kyoto, The Silver Pavilion is situated on some of Japan’s most beautifully landscaped grounds. It has a variety of walking paths and impressive, steep slopes with created forest vistas across the ponds. The temple houses a large sand garden that has a two-meter cone thoughtfully sculpted from silver sand. The cone, intended to represent Mt. Fuji, provides one of the garden’s most important elements, and has become a touchstone for meditative contemplation. Many of the zen art forms, including garden design, trace their origins and evolution back to this temple. 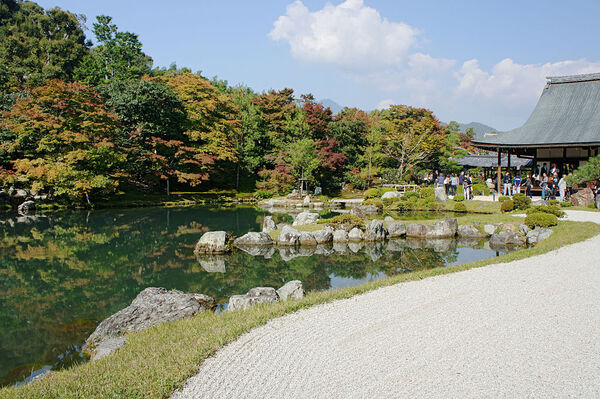 Tenryu-ji, Kyoto
Tenryu-ji, known as the Temple of the Heavenly Dragon dates from 1339. Its gardens were created by Muso Soseki who designed the gardens of many other important temples in the area.  Soseki was also the first head priest at Tenryuji.   Reflections of maple trees hover across the surface of the pond, and a variety of boulders and stones create a dry waterfall within the garden. Tenryu-ji displays the gradual transition from representational Zen gardens to a more abstracted and artificial presentation. Arashaiyama is a suburb in western Kyoto.  It’s a beautiful area with a river that’s especially pretty during spring and fall, and a high density of temples and gardens.  If you leave the garden via the back exit you can walk through Arashiyama's famous bamboo groves. 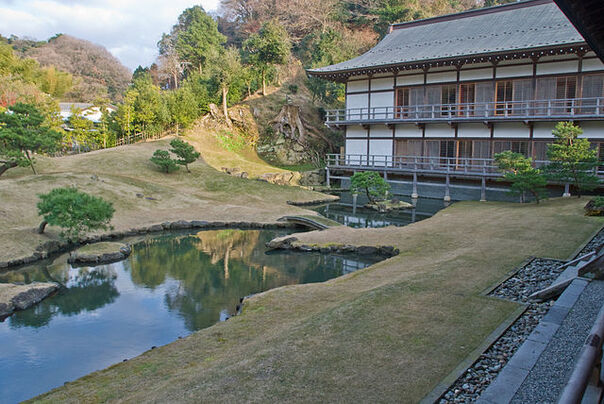 Kencho-ji, Kamakura​
​Known as the first of the Five Great Temples of Kamakura, Kencho-ji was built in the middle of the 13th century. The pond, a focal point within the temple’s Zen garden, is shaped like the Chinese character for mind, and was designed by the famous Japanese garden designer Muso Soseki. 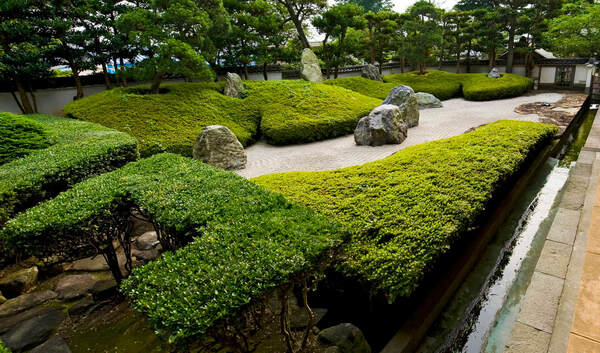 Komyo-ji, Kamakura
​A Jodo temple founded in the 13th century, Komyo-ji’s rock garden is located next to the temple’s main hall. White raked gravel sits quietly beneath eight carefully placed boulders that represent various saints and gods. Usually affiliated with Rinzai sect temples, Komyo-ji’s rock garden is unusual and unique inside this Jodo temple, and is often frequented by the temple’s large population of stray cats. 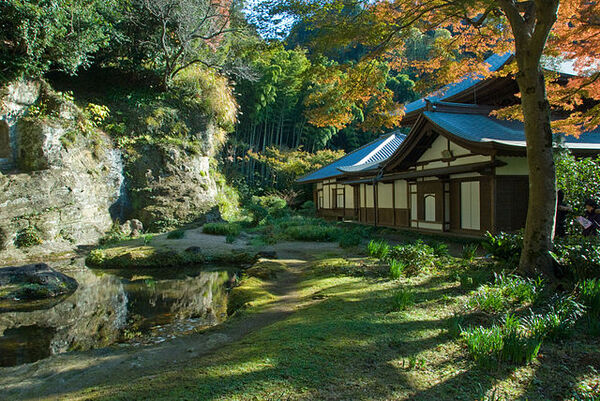 Zuisen-ji, Kamakura​
Founded by priest and garden designer Moso Soseki in the 14th century, Zuisen-ji is situated in a valley surrounded by mountains. The temple’s Zen garden, also designed by Soseki, utilizes the site’s nearby natural rock formations to create a wall around the garden. The enclosure has a pond with two bridges, and a cave has been carved into the northern rock wall, which overlooks the pond, and is used for meditation purposes. 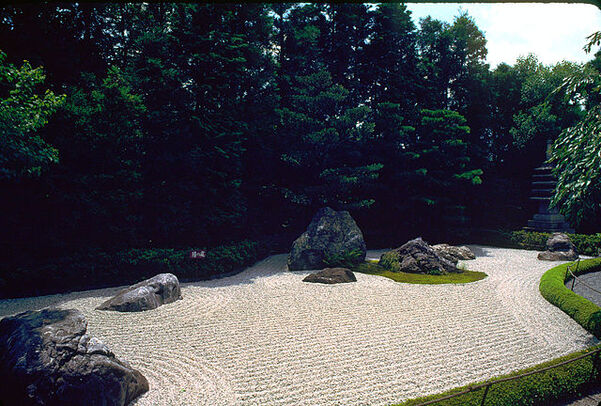 Taizo-in, Myoshin-ji, Kyoto
​A sprawling temple complex with nearly 40 sub-temples and smaller buildings, Myoshin-ji’s Taizo-in temple is best known for its stroll garden and its famous dry landscape garden. Angular rocks representing cliffs align with smaller stones and pine and evergreen trees to evoke the sense of a larger river landscape. Narabigaoka Hill can be seen in the distance, and like many Zen gardens, Taizo-in’s dry landscape garden is thought to be a direct three-dimensional reproduction of a traditional Japanese landscape painting by Kano Motonobu 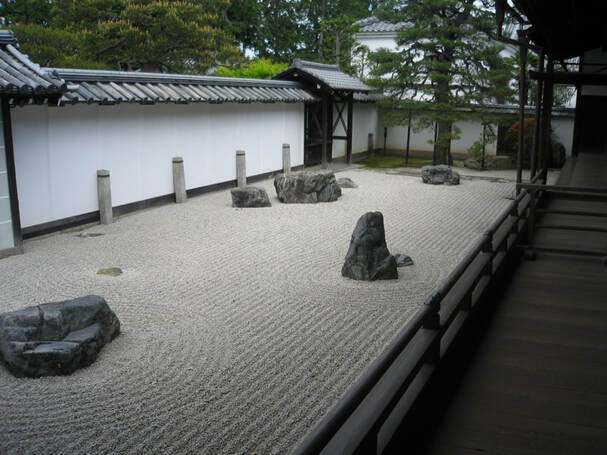 Nanzen-ji, Kyoto
​Nanzen-ji, the headquarters of the Nanzen-ji branch of Rinzai Zen, is known for its traditional rectangular-framed rock garden. Tiny white pebbles, groomed with a rake, suggest quiet ocean waves or the gentle wind across a pond. The garden also has a number of boulders, carefully placed across the field of gravel and intended to represent mountains or islands. Nanen-ji’s rock garden inspires meditation and reflection. 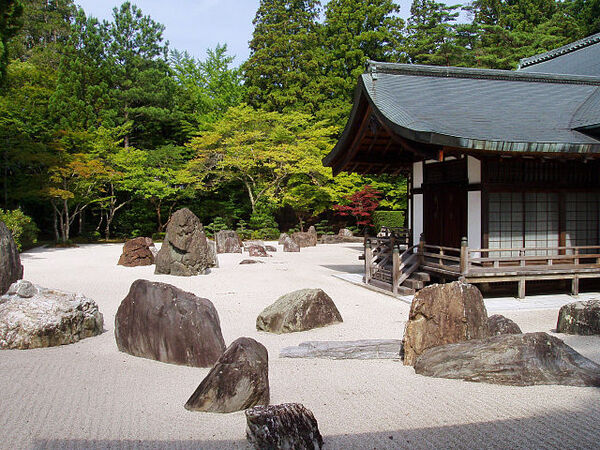 Banryutei, Kongobu-ji, Koyasan
​Located on top of Mt. Koya, Kongobu-ji is known as the Temple of the Diamond Mountain. The temple is home to Banryutei, Japan’s largest rock garden covering nearly 2400 square meters. The garden’s arrangement, composed of 140 granite stones, was completed in 1984. The stones are presented to suggest two dragons descending from the clouds to protect Kongobu-ji 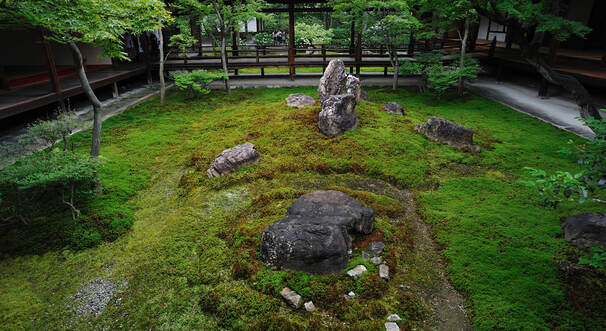 Kennin-ji, Kyoto
​Founded in the 13th century by Yousai, Kennin-ji is the oldest Rinzai Zen temple in Kyoto. The square garden was inspired by Sengai Gibon’s caliigraphy and incorporates three large stones, a mossy ground cover, and a number of surrounding maple trees. Each season as the leaves change, the landscape transforms and becomes alive. Unlike many Zen gardens, Kennin-ji’s garden is lush and green, and shows no evidence of a gravel bed beneath the moss. 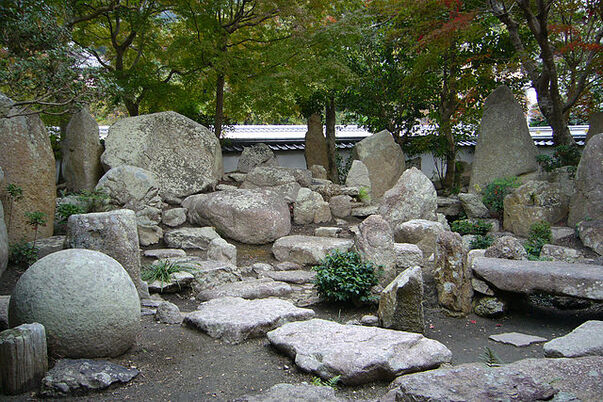 Anyo-in Taisan-ji, Kobe
​Known as one of Japan’s Places of Scenic Beauty, the garden at Taisan-ji has a number of large rocks and boulders. Perhaps intended to represent the bottom of a riverbed or great mountain range, the landscape is meant to promote contemplation and meditation. Creating metaphorical land formations within the small space of the garden, the garden’s designer intended the space to be enjoyed from a single point beyond the garden grounds. 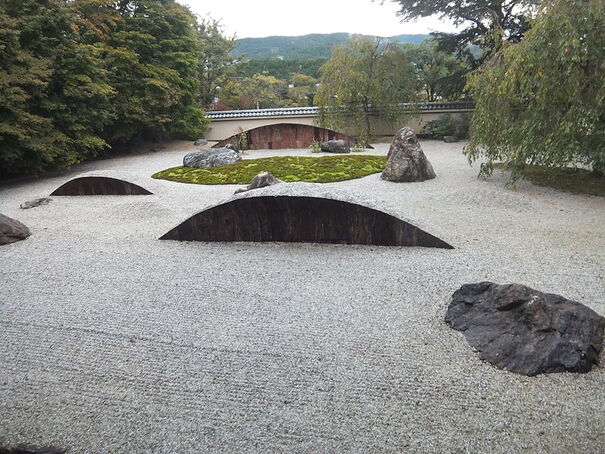 Jisso-in, Kyoto
The stone garden of Jisso-in has a number of modern features that make it unique among this collection of Zen gardens. Containing the customary pebbles of similar gardens, the Jisso-in garden contains a number of large moon-shaped stones that appear as though they are partially submerged below the gravel’s surface. Mimicking giant ocean waves, these man-made stones rise up alongside the garden’s mossy island and larger, more naturally formed stones. The garden has a surrounding wall that is lined with trees, and its unusual elements contribute to the garden’s compelling elegance. 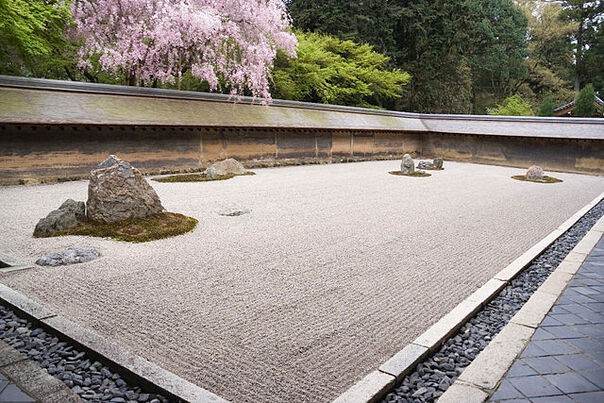 Ryoan-ji, Kyoto
Also called the Temple of the Dragon at Peace, Ryoan-ji has what is probably the most famous Zen garden in Japan. The refined dry landscape has fifteen enormous stones placed inside 248 square meters of highly polished white gravel. The monks residing at the temple groom the gravel each day and the stones are arranged within the space in five separate groups. Like most Zen rock gardens, Ryoan-ji’s garden is to be seen from a single vantage point on the veranda of the Abbott’s residence. The rocks of the garden were arranged so that only fourteen of the fifteen stones may be viewed at any given time from any angle. This arrangement ensures that only through attaining enlightenment will one see all fifteen stones simultaneously. Ryoan-ji became a Zen temple in 1450, but the designer and exact meaning of the garden are unknown. Ideas on its meaning range from islands, to a tiger carrying cubs across the water, to the abstract concept of infinity.