For centuries, the meaning of the mysterious and mystical Egyptian hieroglyphs baffled the greatest minds in the world. Then, in 1799, the discovery of the most famous piece of rock in archaeology
unravelled the secrets of the script.
​

Hieroglyphs dominated the landscape of the Egyptian civilisation. These elaborate symbols were ideal for inscriptions on the walls of majestic temples and monuments, and indeed the Greek word hieroglyphica means 'sacred carvings', but they were too fussy for day-to-day scribbling, so other scripts were evolved in Egypt in parallel. These were the 'hieratic' and 'demotic' scripts, which can crudely be thought of as merely different fonts of the hieroglyphic alphabet.

The rise of Christianity was responsible for the extinction
​of Egyptian scripts.
​
Then, towards the end of the fourth century AD, within a generation, the Egyptian scripts vanished. The last datable examples of ancient Egyptian writing are found on the island of Philae, where a hieroglyphic temple inscription was carved in AD 394 and where a piece of demotic graffiti has been dated to 450 AD. The rise of Christianity was responsible for the extinction of Egyptian scripts, outlawing their use in order to eradicate any link with Egypt's pagan past.
The ancient scripts were replaced with 'Coptic', a script consisting of 24 letters from the Greek alphabet supplemented by six demotic characters used for Egyptian sounds not expressed in Greek. The ancient Egyptian language continued to be spoken, and evolved into what became known as the Coptic language, but in due course both the Coptic language and script were displaced by the spread of Arabic in the 11th century. The final linguistic link to Egypt's ancient kingdoms was then broken, and the knowledge needed to read the history of the pharaohs was lost.

Primitive picture writing.
​
In later centuries, scholars who saw the hieroglyphs tried to interpret them, but they were hindered by a false hypothesis. They assumed that hieroglyphs were nothing more than primitive picture writing, and that their decipherment relied on a literal translation of the images they saw. In fact, the hieroglyphic script and its relatives are phonetic, which is to say that the characters largely represent distinct sounds, just like the letters in the English alphabet. It would take a remarkable discovery before this would be appreciated. 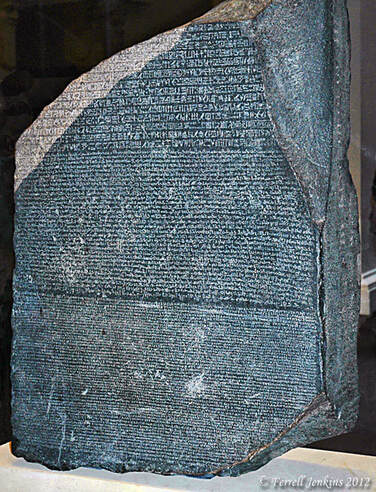 The Rosetta stone.
In the summer of 1798, the antiquities of ancient Egypt came under particular scrutiny when Napoleon Bonaparte despatched a team of historians, scientists and draughtsmen to follow in the wake of his invading army. In 1799, these French scholars encountered the single most famous slab of stone in the history of archaeology, found by a troop of French soldiers stationed at Fort Julien in the town of Rosetta in the Nile Delta.

The soldiers were demolishing an ancient wall to clear the way for an extension to the fort, but built into the wall was a stone bearing a remarkable set of inscriptions. The same piece of text had been inscribed on the stone three times, in Greek, demotic and hieroglyphics. The Rosetta Stone, as it became known, appeared to be the equivalent of a dictionary.
​
However, before the French could embark on any serious research, they were forced to hand the Rosetta Stone to the British, having signed a Treaty of Capitulation. In 1802, the priceless slab of rock - 118cm (about 46 ½ in) high, 77cm (about 30in) wide and 30cm (about 12in) deep, and weighing three quarters of a tonne - took up residence at the British Museum, where it has remained ever since.

The translation of the Greek soon revealed that the Rosetta Stone contained a decree from the general council of Egyptian priests issued in 196 BC. Assuming that the other two scripts contained the identical text, then it might appear that the Stone could be used to crack hieroglyphs. 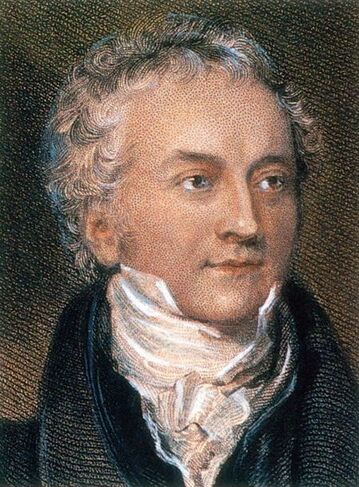 When the English polymath Thomas Young heard about the Rosetta Stone, he considered it an irresistible challenge. In 1814 he went on his annual holiday to Worthing and took with him a copy of the Rosetta Stone inscriptions. Young's breakthrough came when he focussed on a set of hieroglyphs surrounded by a loop, called a cartouche. He suspected that these highlighted hieroglyphs represented something of significance, possibly the name of the Pharaoh Ptolemy, who was mentioned in the Greek text.

If this were the case, it would enable Young to latch on to the phonetics of the corresponding hieroglyphs, because a pharaoh's name would be pronounced roughly the same regardless of the language.
​
Young matched up the letters of Ptolemy with the hieroglyphs, and he managed to correlate most of the hieroglyphs with their correct phonetic values. The decipherment of the Egyptian script was underway. He repeated his strategy on another cartouche, which he suspected contained the name of the Ptolemaic queen Berenika, and identified the sound of further hieroglyphs.

Young was on the right track, but his work suddenly ground to a halt. It seems that he had been brainwashed by the established view that the script was picture writing, and he was not prepared to shatter that paradigm.

​He excused his own phonetic discoveries by noting that the Ptolemaic dynasty was not of Egyptian descent, and hypothesised that their foreign names would have to be spelt out phonetically because there would not be a symbol within the standard list of hieroglyphs.
​
Young called his achievements 'the amusement of a few leisure hours.' He lost interest in hieroglyphics, and brought his work to a conclusion by summarising it in an article for the 1819 supplement to the Encyclopaedia Britannica.
​ 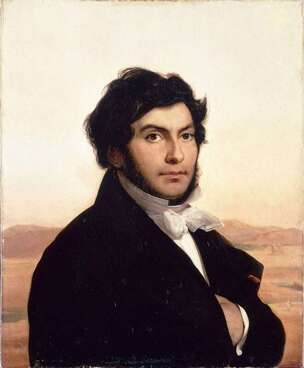 Jean-François Champollion's obsession with hieroglyphs began around 1801 when, as a ten-year-old, he saw a collection of Egyptian antiquities, decorated with bizarre inscriptions. He was told that nobody could interpret this cryptic writing, whereupon the boy promised that he would one day solve the mystery.
Champollion applied Young's technique to other cartouches, but the names, such as Alexander and Cleopatra, were still foreign, supporting the theory that phonetics was only invoked for words outside the traditional Egyptian lexicon. Then, in 1822, Champollion received some cartouches that were old enough to contain traditional Egyptian names, and yet they were still spelt out, clear evidence against the theory that spelling was only used for foreign names.

Champollion focussed on a cartouche containing just four hieroglyphs: the first two symbols were unknown, but the repeated pair at the end signified 's-s'. This meant that the cartouche represented ('?-?-s-s'). 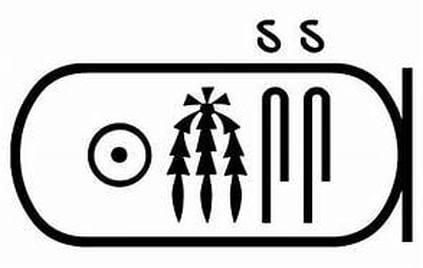 The Champollion cartouch.
At this point, Champollion brought to bear his vast linguistic knowledge. Although Coptic, the descendant of the ancient Egyptian language, had ceased to be a living language, it still existed in a fossilised form in the liturgy of the Christian Coptic Church. Champollion had learnt Coptic as a teenager, and was so fluent that he used it to record entries in his journal. However, he had not previously considered that Coptic might also be the language of hieroglyphs.
​
Champollion wondered if the first hieroglyph in the cartouche, the disc, might represent the sun, and then he assumed its sound value to be that of the Coptic word for sun, 'ra'. This gave him the sequence ('ra-?-s-s'). Only one pharaonic name seemed to fit. Allowing for the omission of vowels and the unknown letter, surely this was Rameses. The spell was broken. Hieroglyphs were phonetic and the underlying language was Egyptian. Champollion dashed into his brother's office where he proclaimed 'Je tiens l'affaire!' ('I've got it!') and promptly collapsed. He was bedridden for the next five days. 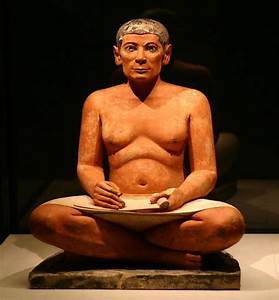 Old Kingdom statue of a seated scribe.
Cracking the code

Although this was just one more cartouche, it clearly demonstrated the fundamental principles of hieroglyphics. It showed that the scribes sometimes exploited the rebus principle, which involves breaking long words into phonetic components, and then using pictures to represent these components. For example, the word belief can be broken down into two syllables, 'bee-leaf'. Hence, instead of writing the word alphabetically, it could be represented by the image of a bee and a leaf. In the Rameses example, only the first syllable ('ra') is represented by a rebus image, a picture of the sun, while the remainder of the word is spelt more conventionally. The cartouche only makes sense if the scribes spoke Coptic.

Champollion went on to show that for most of their writing, the scribes relied on using a relatively conventional phonetic alphabet. Indeed, Champollion called phonetics the 'soul' of hieroglyphics.

Using his deep knowledge of Coptic, Champollion began a prolific decipherment of hieroglyphs. He identified phonetic values for the majority of hieroglyphs, and discovered that some of them represented combinations of two or even three consonants. This sometimes gave scribes the option of spelling a word using several simple hieroglyphs or with just one multi-consonantal hieroglyph.
​
In July 1828, Champollion embarked on his first expedition to Egypt. Thirty years earlier, Napoleon's expedition had made wild guesses as to the meaning of the hieroglyphs that adorned the temples, but now Champollion could reinterpret them correctly. His visit came just in time. Three years later, having written up the notes, drawings and translations from his Egyptian expedition, he suffered a severe stroke. He died on 4th March 1832, aged 41, having achieved his childhood dream.