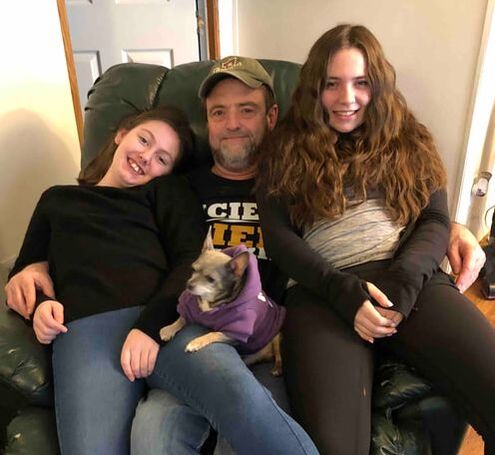 Jubilee, Lonnie and Adelyn
In 2005, our daughter, Hayley, told my wife and I that she wanted to talk to us. I was working late at my job so I had a few hours to be anxious and to worry about what it could be. When we arrived at Hayley’s apartment, we sat down on the sofa. Hayley had just come out of the shower, and she was wearing a red terrycloth bath robe with her hair wrapped in a blue towel. I could smell the sweet, musky smell of a freshly washed body. She sat down beside us and smiled. Then she said, “You are going to be grandparents!” I smiled and my wife, Sherry, was immediately in heaven at the thought of a grandbaby.

It was April 25, 2006, when I got the call at work. Hayley was in labor, and we needed to meet her at the hospital. Sherry went in the delivery room while I sat in the waiting room. Hayley’s friend, Emily, was also in the delivery room. In a few hours, Emily came into the waiting room, looking pale and nervous. I asked how Hayley was doing. Emily told me that she was still in labor but said she was hungry. I knew then that all would be well. Because Hayley is always hungry.

A little after 9:00 pm, Adelyn Simone Rogers made her entrance into this world. Now in the delivery room, I anxiously awaited my turn to hold the newest member of the family. In a few minutes, Sherry placed Adelyn in my arms. A wrinkled face with a head full of dark hair looked up at me. I was in love at that moment.

Camera flashes were one of the first things Adelyn saw. Most of the family was in the room within a few minutes, and with all the attention on the baby, Hayley probably thought that she had been abandoned.

As Adelyn grew, I constantly took pictures and shared them with everyone possible. By the time she was two years old, my computer held some 3,500 pictures of her. I went a little crazy I guess but that’s allowed when you are so much in love.

As Sherry and I were able to look after her regularly, I had to work and that took away precious time. However, when I arrived home, Adelyn would meet me at the door. No matter how tired I was from working, she expected me to play.

I would do whatever she wanted. Playing the Big Bad Wolf from nursery rhymes was a favourite. I had an advantage over some because that play time gave me time to look at her from a different perspective. It was in those precious moments that I noticed a certain sadness about her. Broken homes beget innocent victims. I knew she was well cared for by both parents, but I also believe the wear and tear take a toll on the little ones. Coming from a broken home myself, I remember the sadness and loneliness and it broke my heart into to think she might feel that.

On one occasion Adelyn wrote a letter to me. It was just lines and circles, but I was honoured to receive a gift from one so pure of heart. Her unconditional love and trust never ceased to amaze me. I learned a valuable lesson. My two-year-old teacher changed me. Before she came along, I was somewhat cold inside. But the love, and sometimes pain, in her eyes moved me in ways I had never experienced. I felt very humble when I realized that I was honoured. Honoured to be in her presence. Before her, I didn’t know I could love someone so much it hurt. When she wasn’t with me, my chest physically hurt.

Then they moved to Tuscaloosa, Alabama. About three hours south so Hayley could go to the University of Alabama.  Separation from Adelyn absolutely tore into our hearts. Visits were never long enough; phone calls were just not the same.

Adelyn was nearing her third birthday when our other daughter, Ashley, told us we were soon to have another new member in the family. I do not remember a lot about that day but one thing I will never forget. As she told us the unexpected news, I told her to come to me. Then, though I have made her mad many times, I held her in my arms while she sat in my lap, and I told her everything would be okay.

September 14th, 2009, we were at the hospital. This time I was in the delivery room, along with Sherry. I remember watching the monitors intently as we waited. Suddenly I started to feel dizzy. Examining myself, I knew that I was not nervous, and I was in full mental control. What dawned on me was that I was not breathing. Once I started breathing, I was fine.

It wasn’t long until Reagan Jubilee Rogers arrived. She came into the world mad. The doctor didn’t have to do anything because she was screaming. I couldn’t really blame her. Babies are poked and prodded and passed from hand to hand. All this after being pushed through a canal that is only big enough for sausage. A few minutes later, I was in love yet again. She had a little problem with jaundice but otherwise she was fine.

Going by her middle name, Jubilee, she grew to own our hearts, just like Adelyn. Jubilee was the subject of many, many pictures and she and I grew close, just like Adelyn and I did. As she grew and started talking, I could do no wrong. She thought I held the moon and stars in my hand. But there have been times of darkness when we were prevented from seeing her. I do not believe a child should ever be used to punish someone. My heart ripped from my chest does not begin to describe the pain that I felt, and I couldn’t be very encouraging to Sherry, who was hurting just as much. Even now, tears flow when remembering those times. Thankfully, hopefully, that is all behind us and we get to watch her grow.

Over the years, they have painted my face, painted my fingernails, and put bows in my hair. Changing poopy diapers when they were little was the highlight of my day. Then as they grew, my play time with them became the time of day that I most looked forward to. Their mothers say I spoil them, but spoiling is allowed. I just take it to a new level.

There have been gymnastics, T-ball, basketball, and horse riding. We have had played hide-n-seek and many other games, while they grew up much faster than we wanted.

Now Adelyn concentrates on horses and has been competing in jumping contests for several years. She has a room full of ribbons and awards. She is now 15 years old, and Sherry and I could not be prouder of her.

Jubilee will be 12 years old soon. She has been on the school swim team several years as well as playing basketball. She too, has many ribbons and awards.

All these memories take me back to the months when we were anxiously anticipating Adelyn’s arrival. I would tell anyone who would listen, that I was going to be a grandfather.
​
When I told a truck driver friend of mine, he said “You’re going to find out why they call them Grand.” He could not have been more correct. They are indeed Grand.
Lonnie McKelvey is a freelance writer based in Fort Payne, Alabama, and is a regular contributor to Grandparents Day Magazine.