​Inside the
life of a geisha. 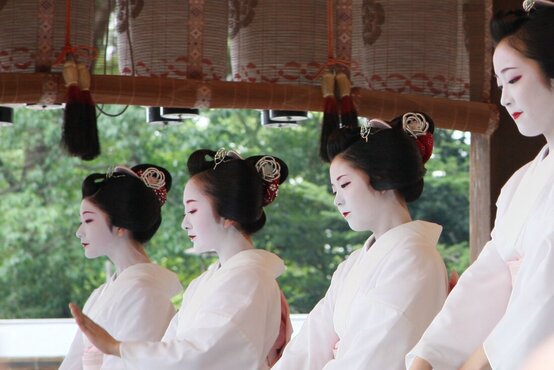 It seems unbelievable but the very first geisha were actually male. They appeared somewhere around 1730 and it wasn’t until 20 years later that female geisha began to appear in the form of odoriko (dancers) and shamisen players (a traditional Japanese three-stringed instrument). Not surprisingly, these quickly took over the profession, dominating it by 1780.
​
Originally, geisha, or to give them their correct Japanese name, geisya or geiko, acted as assistants to the oiran, high class and very expensive Japanese courtesans who resided in the hanamachi, literally meaning flower town, the pleasure quarters of Edo (modern day Tokyo) Kyoto and other major cities of the Edo period (1603-1886). These geisha were not even allowed to sit near guests as the courtesans feared they might steal their customers and there were even regulations forbidding geisha to form personal relationships with customers. 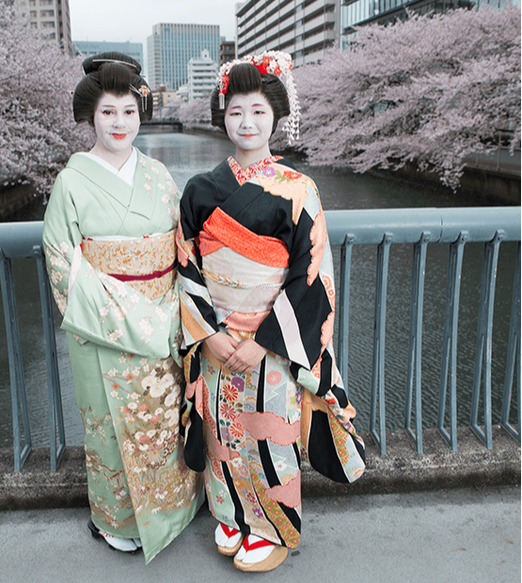 ​Gradually though, patrons visiting the courtesans began to gravitate towards the less expensive and much more socially accessible geisha and by the 1800s, geisha for the most part were replacing oiran at the center of parties. As the popularity of the oiran waned in the Meiji Period (1868-1912), the popularity of geisha grew, as they became vital providers of hospitality and entertainment at dinner events for large companies and government officials. The popularity of geisha grew continually up until the 1920s, when there were as many as 80,000 geisha throughout Japan entertaining guests. It was only as the country became involved in international warfare that the strain on Japanese society threatened the role and prestige of the geisha profession.
​
After many decades of prosperity, geisha began to feel the effects of Westernization after the Meiji Period (1868-1912) and their numbers began to decline, especially with the approach of World War II. The dramatic decline in leisure time and resources decimated the hanamachi where the geisha worked. After the war ended, relatively few venues reopened, and found themselves facing even tougher regulations in a completely different post-war Japan.

U.S. soldiers stationed there had their first interactions with Japanese culture, which led to a variety of misunderstandings. One of these was the sweeping categorization of female hospitality workers in Japan, including prostitutes and nightclub hostesses, as “geesha girls”. 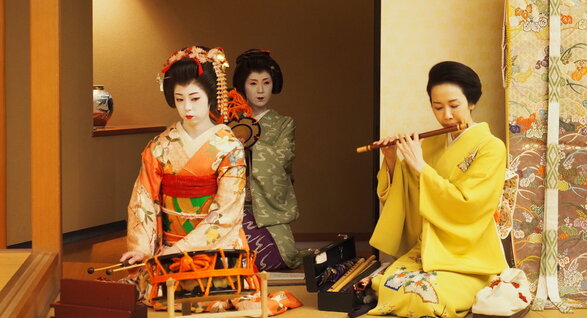 Geisha are professional entertainers. They are highly trained in a variety of Japanese traditional arts, such as dancing, singing, flute, and shamisen, as well as the art of hospitality. They also play games and engage in conversation with visitors, to provide the most welcoming and intimate environment possible. Although throughout history there have been cases of geisha engaging in prostitution, it has never been widely accepted as part of a geisha's traditional role, and thus the two occupations should not be confused, especially in modern times.

So, what does it take to become a geisha? The process is long, arduous and expensive.
​
For most, it starts from around 15, when young girls enter schools that specialize in training geisha. The new apprentices live in what are known as an okiya, a kind of female-only lodging house owned by a proprietress referred to as okāsan (literally meaning mother) and inhabited by other apprentices. Their training can take a minimum of four years, often up to 18 hours a day, with extremely rare visits home.
​
They live in a community with rigid hierarchical relations. Discipline is indispensable, and they need to commit themselves to traditional arts seriously and improve their skills every day. Many quit before the end of their training as they struggle to live away from home comforts and from the trappings of modern life. 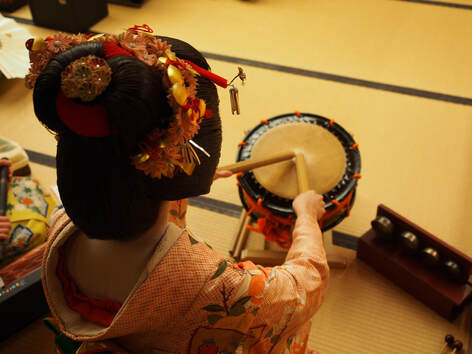 At the okiya, the okāsan is the one who will pay for the apprentice's expenses. This includes clothing, instruments, food, housing and the actual training, meaning that an apprentice will accrue a very large amount of debt before she can even begin working. A geisha will inevitably work for years after completing her training simply to repay this debt to the okiya. Furthermore, she will remain contractually tied to it until she has repaid all her debts, after which she may choose to live independently if she prefers.

A newly accepted apprentice first goes through a training period, where she is known as a shikomi-san. During this time, she will attend her classes, do chores to help maintain the okiya, and also serve as an assistant to other geisha. Typically, this training period will last around four years.

Apprentices must also begin attending nyokoba, vocational schools for geisha in training so that they can learn many kinds of traditional Japanese performance arts to entertain their guests. This includes a variety of musical instruments, such as the kotsuzumi (a small drum held on the shoulder and played with the hand), shimedaiko (a small standing drum played with sticks), shamisen, and fue (a flute made from a single piece of bamboo).
​
During the next stage of training, an apprentice is called a minarai, (literally learning by watching). She must find a mentor geisha, whom she calls onēsan (literally meaning older sister) and may accompany her to ozashiki, banquets in traditional tatami-mat rooms, so that she may observe how her mentor and other geisha interact with guests. This way, once the apprentice finishes her formal training, she will have some real-world experience and know potential clients. ​ 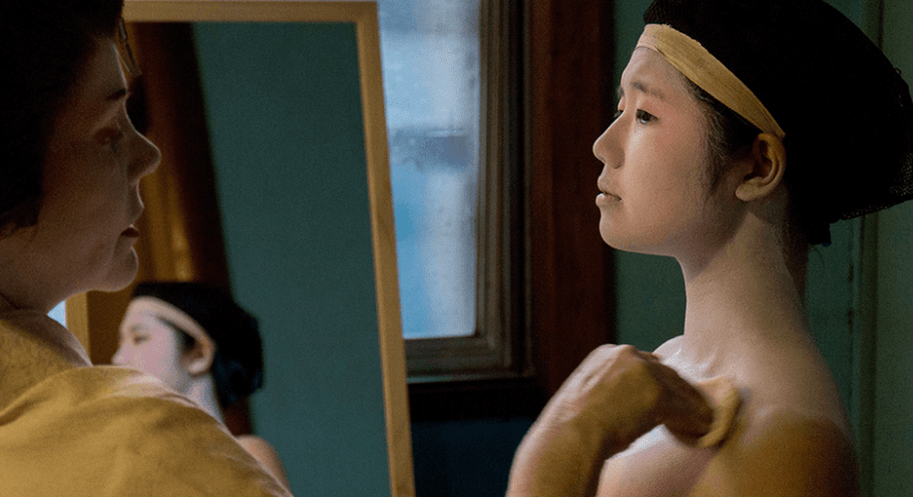 As she is still an apprentice, the minarai will wear clothes similar to, but not entirely identical to maiko, the geisha apprentices who have already had their official debut, and whose appearance most resembles our typical image of a geisha. This includes the white face makeup and colorful clothing. However, the minarai wears a half-length obi (sash), called a
​han-dara obi.
​
The minarai training period will start about a month before the apprentice's official debut, but even after she has her official debut, she will continue her learning through observation by attending events with her older mentor, and also continue her training in classical arts at the nyokobo.  After roughly a month of being a minarai, the young geisha-in-training will have her official debut, called misedashi. 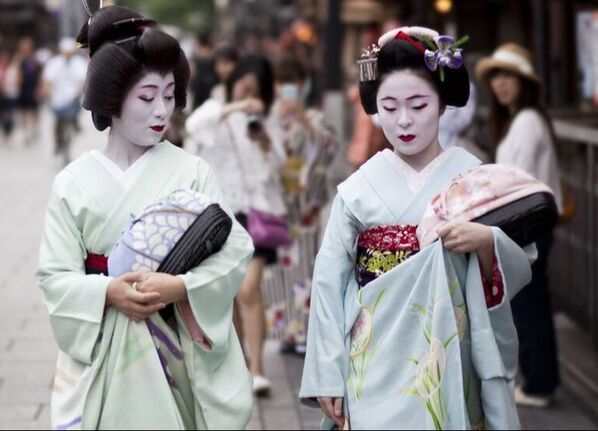 On the day of the ceremony the okiya walls will be decorated with red and white paper and auspicious images. Accompanied by her mentor, she will go around the hanamachi and visit various dance teachers and tea houses. She will also go through a ritual known as sansankud where she exchanges cups with her mentor, other geisha, and the senior maiko. After this, the apprentice is officially a maiko, (literally meaning dance girl), a stage that can last for years until an apprentice finishes her training. As a maiko, she will take on the appearance that most people associate with geisha. She will wear prominent white makeup covering her face and red on her lips (taking sometimes more than two hours to complete!), brightly colored kimono with a long elaborate sash called a darari obi, okobo (shoes) nearly 10 centimeters high, and also the large turtle shell hairpin. Maiko will also begin adopting the hairstyles most people imagine when they think of geisha. Unlike geisha, who are permitted to wear wigs, maiko use their real hair and the constant pulling required for maintaining the hairstyle can actually lead to a bald spot in the center. Furthermore, to maintain the hairstyle, maiko must sleep on takamakura, specially designed pillows to preserve their hair's shape, and can face punishment if they fail to do so.
​
After finishing these years of training, geisha are finally permitted to entertain their own clients. To be a geisha is to be in a very beautiful world, surrounded by beautiful women and beautiful things, and entertaining in beautiful places. Their kimonos alone each cost more than a car and they are seen as the epitome of elegance and feminine achievement. Perhaps the long and difficult road to such achievement is worth the price exacted.