The Art of Garden Design

Eight rules for creating a satisfying garden that is neither fussy nor constraining
By Rob Steiner
It’s tempting, in a field as subjective as garden design, to feel that rules do not apply. However, after 28 years and hundreds of projects later, I’ve come to believe in certain rules and guidelines that are neither fussy nor constraining. All have proven invaluable to me over my years of garden-making. Applied by any gardener, amateur or professional, they will result in a more successful, satisfying design.

Let’s start with two rules that can kick-start the process of laying out a landscape, then move on to guidelines that help in scaling the proportions of a garden’s elements and, finally, to choosing and using the right plants.
1: OBEY THE "LAW" OF SIGNIFICANT ENCLOSURE
Yes, this one’s a “law,” not just a rule! It addresses the root meaning of garden, which is “enclosure.” This, to me, is absolutely critical in creating a sense of refuge and feeling oneself within nature’s embrace. The law of significant enclosure says that we feel enclosed when the vertical edge of a space is at least one-third the length of the horizontal space we’re inhabiting. Probably derived from behavioural psychology studies, this rule came to me from a professor in graduate school, and it was one of the best things I learned.
​
Just yesterday, as I was starting the design of a patio that I wanted to separate from an adjacent play area, it gave me instant guidance for how tall a hedge I would need: the area was 17 feet wide, and so my hedge should be at least 6 feet. Sit near a tree in the park, or a wall, and gradually edge away, and you’ll see how it works. Of course, there are times when the point of a landscape design is a monumental sense of scale or view, but the best gardens, whatever their size, modulate a feeling of enclosure and openness, and this rule will help. 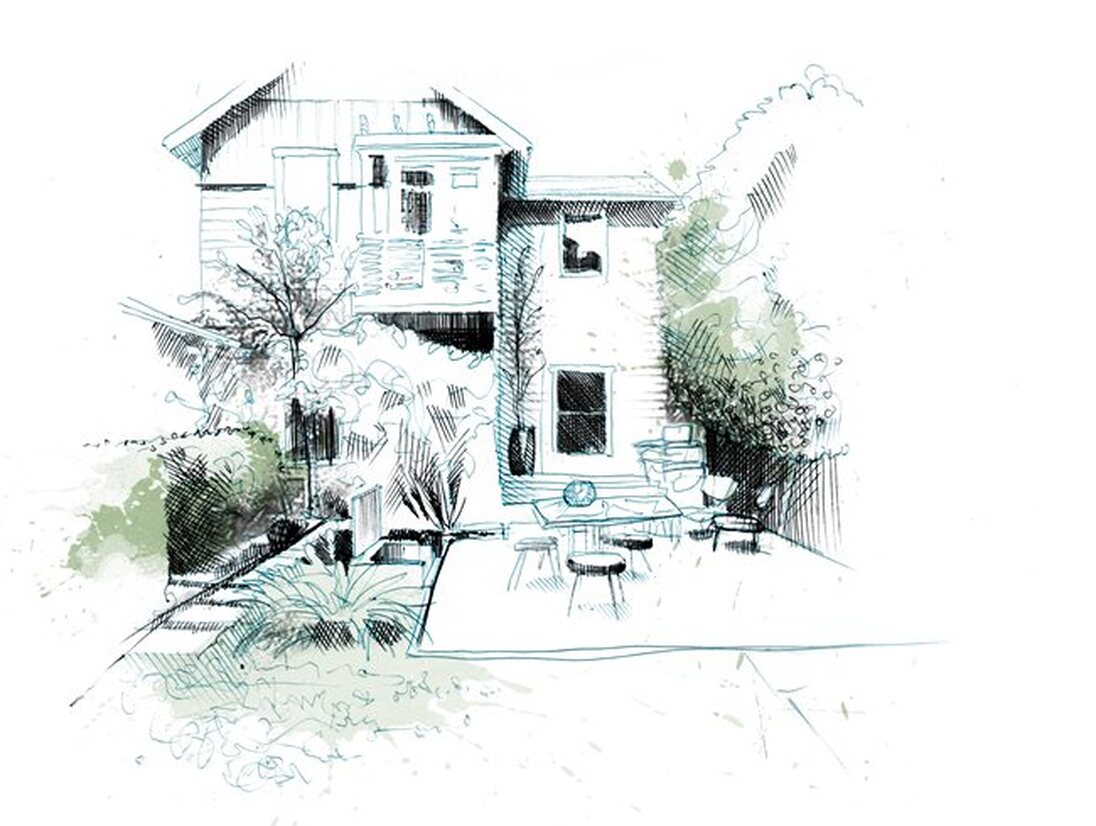 On this project in Pacific Palisades, CA, an existing and overgrown row of ficus was reduced by half knowing it would still more than adequately enclose the patio.

The decking on a different project in Pacific Palisades, CA, creates a regulating line that is parallel to the plane create by the gray wall of the house in the upper right of the image. Another regulating line is created by the edge of the pool running parallel to the glass window on the home. These lines intersect at the base of the tree. Illustration by David Despau.
2: FOLLOW THE REGULATING LINE
My formal architectural education also introduced me to the concept of the “regulating line.” The idea is that an element of architecture (for example, a doorway, or a building edge, even a window mullion) or a distinctive landscape feature (prominent tree, existing pool, property boundary) can “generate” an imaginary line that helps connect and organize the design. For example, in laying out one backyard, I projected the lines of its building addition into the garden space and then aligned the swimming pool and wooden walkway with those lines. The result is orderly and cohesive, even after being softened with planting. “A regulating line,” wrote the great architect (and theoretician) Le Corbusier, “is an assurance against capriciousness…It confers on the work the quality of rhythm…The choice of a regulating line fixes the fundamental geometry of the work....”
​
Le Corbusier hits on the two aspects (a bit paradoxical, perhaps) that make the regulating line so valuable. First is the idea of underlying order: that the garden, for all its naturalness, or wildness, is founded on strong principles—what’s sometimes known in garden circles as “good bones.” Second, that regulating lines—at least as I employ them—are subjective; it’s the designer who identifies and manipulates them to create the garden. And I’d say that the use of the regulating line, more than any other concept, separates professional from amateur design. 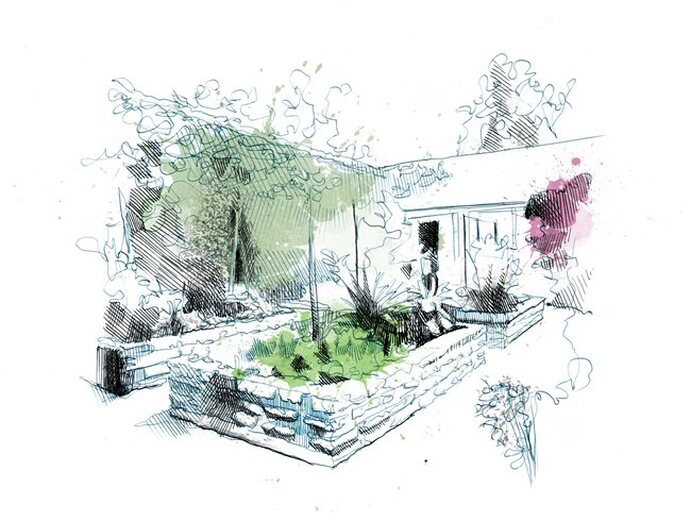 Raised planters in my garden follow the Golden Rectangle. Note, too, the significant enclosure provided by the Eugenia hedge. Illustration by David Despau.
3: USE THE GOLDEN RECTANGLE TO GET PROPORTIONS RIGHT
Certain rules help us refine design. One is the Golden Ratio which is a ratio of proportion that’s been observed in everything from the Great Pyramids at Giza to the Greek Parthenon and has been used throughout history as a guide to a pleasing sense of balance and order. The practical application that I make of the Golden Ratio involves its sibling, the Golden Rectangle, in which the ratio of the short side to the long side is equal to the ratio of the long side to the sum of both sides (a/b = b/a+b)—you probably didn’t know that landscape architects had to learn math. Numerically, the Golden Rectangle ratio is close to 1: 1.6, a proportion I regularly use to lay out terraces, patios, arbors, and lawns. The raised beds in my vegetable garden are 5 by 8 feet. It’s a rectangular proportion that always looks good—they don’t call it golden for nothing! 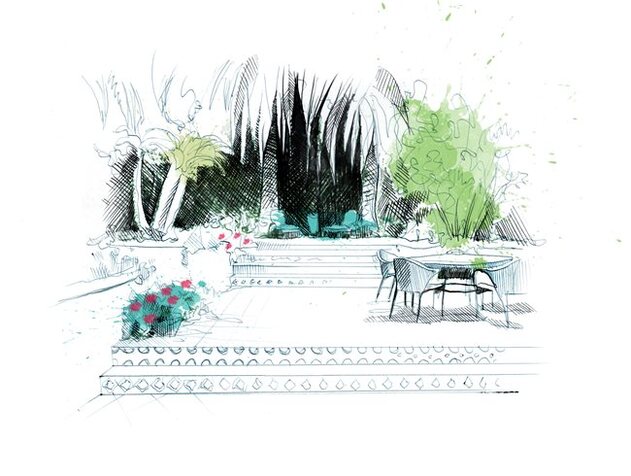 The big palms on this Mediterranean project were already on the property; the pepper tree followed. Then the hedges and vines were installed. Only after all this were the perennials and containers planted. Illustration by David Despau.
6: PLANT BIG TO SMALL
It’s with plants, probably more than any other element of gardens, that the infinite variation and fickleness of nature is most evident—and so perhaps, they are the trickiest to prescribe rules for. And yet, successful planting is the crowning touch of a garden. Three rules have always served me well.

First, is to plant big to small: start with trees, then shrubs, then perennials, then ground cover. This is important not only in a compositional way (seeing the bigger forms first gives a better sense of the overall structure), but in a completely practical sense. Setting a big tree may require machinery or at least multiple gardeners and ample space for maneuvering and stationing amendments and soils; it would be sad to damage or undo some newly planted bed. This seems so obvious, but for lots of gardeners (the author included) a block of fresh perennials may be impossible to avoid planting right away. Be strong; resist the temptation. 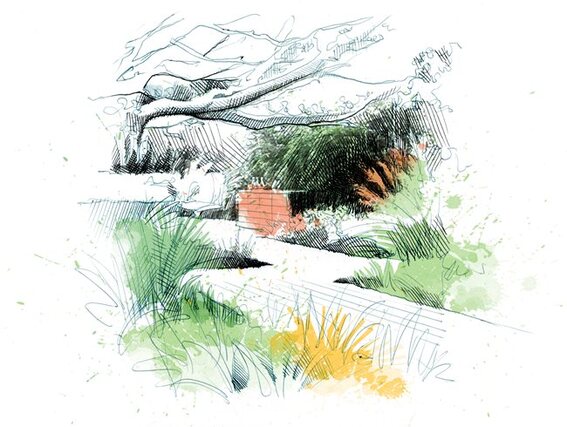 Ornamental grasses, Miscanthus sinensis ‘Morning Light’ and Sesleria autumnalis flank a garden boardwalk in Pacific Palisades, CA. Using drifts on both sides of the walk reinforces a sense of mass planting. Illustration by David Despau.
7: PLANT IN MASSES
While there is much to be said for the cottage garden, with a rich array of varied planting (indeed, it’s the real master gardener who can pull this off), there is a power to seeing a quantity of one plant that is genuinely affecting. Russell Page, one of the great twentieth-century landscape designers said it well: “the most striking and satisfying visual pleasure comes from the repetition or the massing of one simple element. Imagine the Parthenon with each column a different kind of marble!”

I remember as a beginning garden designer in California being taken aside by my mentor, a transplanted Englishwoman who owned the nursery, walking through a vast block of salvia, and being told that I could, if I liked, use 30 of them—not the three or five I’d typically been planting. It was a liberating moment.