Creating an Egyptian themed garden is not as hard as you might think.
Here's the rundown on how to incorporate elements to transport you
​to the Land of the Pharaohs. 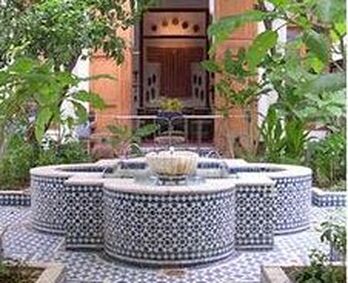 Themed gardens from around the world are a popular option for landscape design. Egyptian gardening combines an array of fruits, vegetables, and flowers which were both native to the Nile floodplains, as well as those imported species which captured the hearts of Egyptians throughout the centuries. Creating an Egyptian garden in the backyard is as simple as incorporating the plants and elements of design from this region.

Egyptian Garden Elements
From a civilization born around the fertile offerings of a river and its delta, water features are a staple of Egyptian garden design. Rectangular fish and duck ponds lined with fruit bearing trees were commonplace in the ancient gardens of wealthy Egyptians. Fed by irrigation channels, which eliminated the need to manually transport water from the river, manmade ponds allowed ancient Egyptians the opportunity to expand agriculture away from the flood basin of the Nile.

Walls constructed of adobe brick were another common feature of Egyptian garden design. Built to differentiate garden spaces and protect vegetables and fruit crops from animals, walls were part of the formal layout of the garden. Like ponds and housing, gardens were rectangular and reflected the Egyptian’s understanding of complex geometric concepts.

Flowers, especially, were an essential part of temple and tomb gardens. Ancient Egyptians believed floral fragrances indicated the presence of gods. They symbolically adorned and garnished their deceased with flowers prior to entombment. In particular, papyrus and water lily embodied the ancient Egyptian’s beliefs of creationism, making these two species crucial plants for Egyptian gardens.
Or, if space and your site permits, consider creating the modern equivalent of the sandstone terraces that adorned the fronts of temples and palaces.

​If you’re adding Egyptian garden elements to your landscaping design, consider incorporating the same flora that was grown in ancient residences near the Nile, each of which had a special connections with a god or goddess or with some religious ceremony.