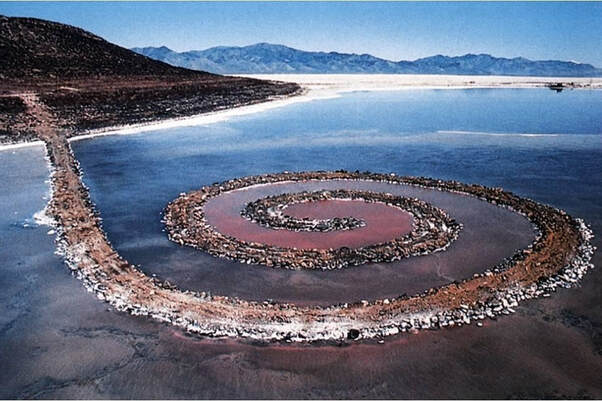 Robert Smithson "Spiral Jetty"
Earth art, variously known as Land art, environmental art, and Earthworks, is an ​art movement that emerged in the 1960s and 1970s, largely associated with Great Britain and the United States. Earth art expanded the boundaries of art through the use of new materials and the siting of works in the natural enviropnment. The materials were often the materials of the Earth including soil and rocks, vegetation and water found on-site, and the siting of the works was often far from population centers. Though the works were sometimes fairly inaccessible, photo documentation was commonly exhibited in urban art galleries.

Concerns around a rejection of the commercialization of art-making were stimulated by an emergent ecological movement and concerns for planet Earth as home to mankind.
​
Perhaps the best known artist who worked in this genre was the American Robert Smithson.  His best known piece, and probably the most famous piece of all land art, is the Spiral Jetty (1970), for which Smithson arranged rock, earth and algae so as to form a long (1500 ft) spiral-shape jetty protruding into Great Salt Lake in northern Utah, USA.
​
However, we’re going to concentrate on a British artist, Andy Goldsworthy.
Andy Goldsworthy is a British artist known for his site-specific installations involving natural materials and the passage of time. Working as both sculptor and photographer, Goldsworthy crafts his installations out of rocks, ice, leaves, or branches, cognizant that the landscape will change, then carefully documents the ephemeral collaborations with nature through photography. “It's not about art,” he has explained. “It's just about life and the need to understand that a lot of things in life do not last.”
Andy Goldsworthy not only works with nature, but in nature. Rather than building monumental constructions on or out of the land, Goldsworthy works almost telepathically with nature, rearranging its natural forms in such a way as to enhance rather than detract from their beauty. Often quite small in scale, his poetic site-specific pieces are made from ephemeral or organic materials - dandelion flowers lain in a ring or icicles perched on a rock - and then documented through gorgeous color photographs. Goldsworthy views the inevitable death and decay in his work as part of the life cycle - he takes an environmentalist's approach, lending an utmost respect toward the natural world as most of his pieces gradually fade away into the land from which they've come.

His approach not only makes nature the co-author of his work, but emphasizes that human beings are not separate from nature, but are rather an inexorable part of it.
​
Goldsworthy's work draws upon a Minimalist aesthetic that derives from seeing the poetic in the everyday. Stones, rocks, branches, twigs, leaves and ice are arranged carefully and patiently, making use of various repeated motifs such as snaking lines, spirals, circles and holes.
Goldsworthy is a very hands-on sculptor for whom a large point of the work resides in the process of making it. "Learning and understanding through touch and making is a simple but deeply important reason for doing my work." His enthusiasm and wonder express themselves through the making, as he remarked, "each work is a discovery."
​
The passage of time and its eventual dissolution of materiality is central to Goldsworthy's work. In focusing on ephemerality, Goldsworthy rejects the idea of art as a commodity to be exhibited and sold. Furthermore, he sees the fact that he uses temporal objects as a reflection of the ever-changing world we live in and the need to understand that nothing is eternal.
Goldsworthy is interested in the social history of the land on which he is working and that includes its human population. He feels it is important to acknowledge a site's rich history and the various connections that people have in relationship with the land. As he has said, "People also leave presence in a place even when they are no longer there."
​
Goldsworthy sees human beings as part of nature rather than separate or distant from it, something he understands could suggest his work has a spiritual or mystical purpose. His overriding interest though is practical - he wants to investigate what he describes as the "energy of making" inside of things, while seeing the energy and space around a material (the effect of the weather for example) as being as important as the energy and space within. As he puts it himself, "movement, change, light, growth and decay are the lifeblood of nature, the energies that I try to tap through my work."