Community has a myriad of meanings and a multiplicity of forms. For the Durham Pointers it meant stepping into the breach when they lost a vital tourism facility in 2009. 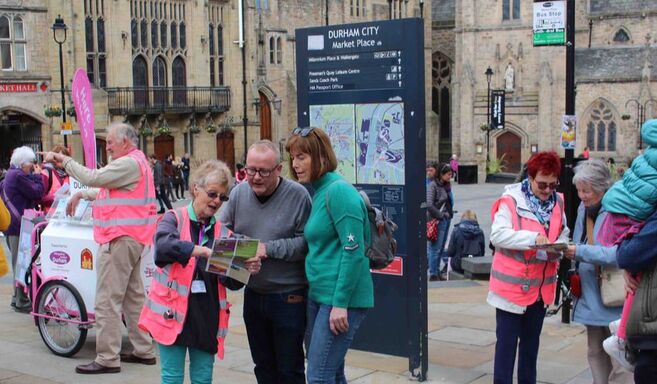 Durham is a very historic city in north east England. It includes two World Heritage sites,  the cathedral and the castle, which draw many thousands of visitors to the city each year.

Up until 2009 County Durham consisted of a County Council and several District Councils, of which Durham City Council was one. The City Council was responsible for tourist information and there was a Tourist Information office in the town centre. Then the County became a Unitary Authority, dispensing with the district councils. The County Council, in an effort to demonstrate fairness across the whole county, decided to spread different activities across the County, rather than centralising them in the city, and the tourist office was relocated to a small town 10 miles away as an online/phone only service for the whole County.

Many local residents were concerned this left the city with no informational support for the many thousands of visitors who come to Durham every year. Most would have thought it beyond their scope to do anything about it but a core group of ‘can do’ visionaries decided something had to be done. Rather than simply rue the loss of their Council-run facility, they decided to set up their own independent service for visitors.

The Durham Markets Company runs the indoor and outdoor markets in the city as well as special farmers and Christmas markets and has been in operation since the 1850s. The DMC Manager supported the service suggested by that core group and decided to back them. So in 2012 a small article was placed in the local newspaper and a few folk responded. This was the start of the Durham Pointers. 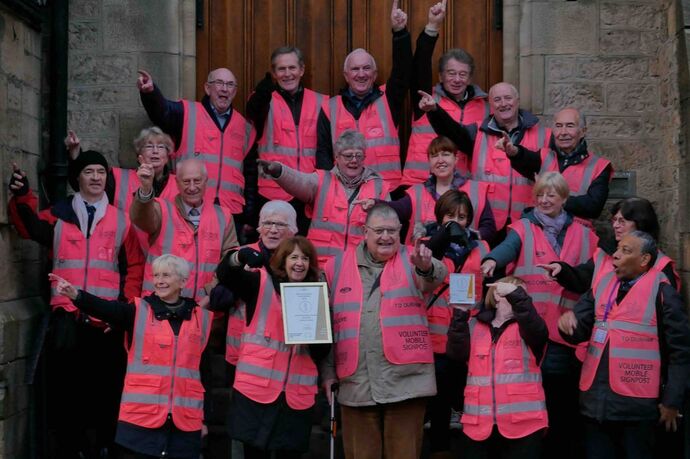 A group of volunteers with their second Visitor Information Provider of the Year award.
Their yearly season usually starts at Easter and closes with the end of Summer and they try to have at least 2 volunteers, dressed in their eye-catching pink tabards, on duty between 9.30am and 3.30pm every day. A coordinator ensures everyone has up to date information on any special events and writes up a daily notice board.

The Pointers have been particularly successful in providing a “meet and greet” service for visiting coach parties that often have visitors who can’t walk far. Durham’s hills and cobbles are not necessarily friendly to those with disabilities and the Pointers can give them personal help, often walking with a visitor to show them where to go.

They are also indispensable on Durham University Open Days helping prospective students and families find their way around. There can be 10,000 extra visitors in their small city on an Open Day so the Pointers schedule extra volunteers to cope with the increased demand for information.

All this is achieved on a meagre budget of just £5000 per annum yet, last year, they recorded over 50,000 visitor contacts and met more than 200 coaches, greeting another 5000 visitors. The professionalism of the Pointers has been recognised in the North East England Tourism Awards in which they won the Visitor Information Provider of the Year Award in consecutive years, only missing out on a hat-trick because the category was abolished in 2019.

The Durham Pointers are a prime example of community at work, providing a solution to a problem that most would have thought to be beyond them. If you’re ever in Durham, look out for that bright pink tabard. Whoever is wearing it will be a fount of information and sure to give you a friendly welcome.