How to get involved in community theatre 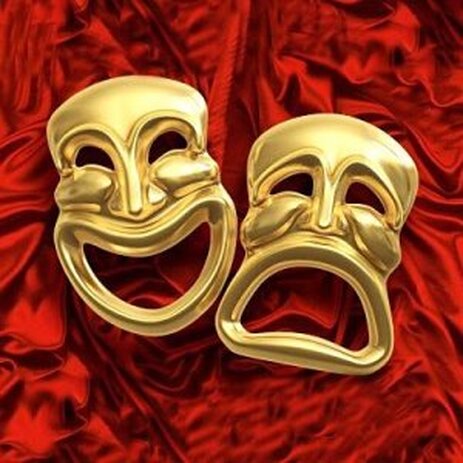 If you’ve ever thought about getting involved with your local community theatre but are not sure how, here are a few ideas to get your show on the road!

Research.
​The first step to getting involved is getting informed. Browse to find out your nearby theatre and read their mission statement, what shows they are casting, if they have crew openings, if they are holding auditions, or are in need of donations. Then, it’s best to call and speak to a staff member who should be able to direct you to the right person to speak with further, either by email, phone, or in-person.

Attend a show.
Chances are you’ve already visited the theatre before as a patron, but if not, plan on checking out a show. Stay around after and see if you can speak to current cast members. This is a good way to get a feeling for the troupe and get tips or pointers from someone already in the know.

Set up an audition.
Sure, auditions can be intimidating, but there are ways to take the stress out of the process. Some pre-work goes into arranging for an audition, and being organized with your schedule is always a good initial start. If you have to call ahead to place an audition time, do so early to make sure there will be space for you. Make sure you write down the correct time and place for the audition, plan to arrive 10 minutes earlier than the appointment time. Early arrival looks professional.

Be prepared!
Consider taking a couple of basic acting or improv classes before you dive into auditions.

If you are supposed to prepare a song, scene, or monologue, do so. Regardless of whether you have to prepare something or not, do familiarize yourself with the play or musical you're auditioning for. Nothing looks worse than walking into an audition knowing nothing about the show!  However, many casting directors suggest that you avoid picking a song from the show (For example: If they're doing Grease, ladies should not sing Sandra Dee and gentleman should avoid Sandy and Beauty School Drop Out!). Choose a song in a similar style to the show you're auditioning for that showcases your vocal range and your acting ability.

If you weren't told to prepare anything, chances are you'll be doing a “cold read.” This means you will be given a song or scene and a few minutes to look over it before you have to perform it for the casting directors. You probably won’t be comfortable with the material, but this is part of your audition ‘test’. Directors are assessing how well you work under pressure. Just do your best and know you don't have to be perfect! 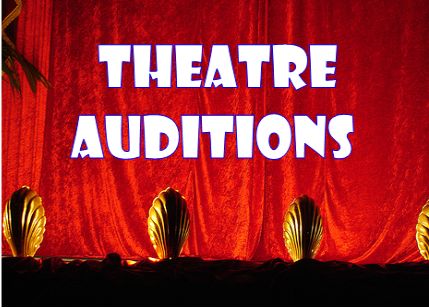 Nail the audition.
Be fearless and do your best!
Follow up.
A few days after auditions, there may be callbacks, or a second round of auditions. If you are called back, congratulations, the directors want to see you again and may be interested in casting you.

You will be reading for specific parts during callbacks, so try to act as if you think as your character would. If you are not called back, it’s okay, there’s always another play.

Check the cast lists when they're ready. A few days after callbacks, cast lists are usually posted. This is a list setting out who is playing each part. The list may be emailed to you, you could receive a call, or it might be posted somewhere at the theatre.

If you have been cast, congratulations and give yourself a pat on the back. Be sure to let the director know in a timely fashion that you accept the role so that they don't give it to someone else. If you haven't been cast, don't worry, there will always be other plays, or maybe consider joining the crew.

And about joining backstage crew.
Most of the action actually happens behind the theatre curtains and working offstage is an exciting way to get involved, especially if you’re shy or not really into acting. Every job backstage is important. The show couldn't go on without its crew members. 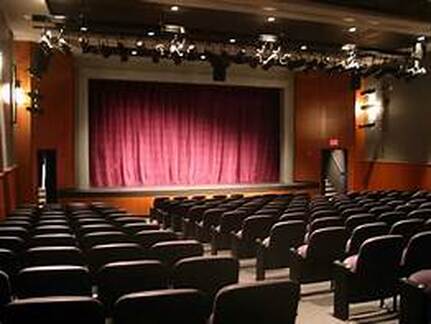 Everybody needs admin staff.
Theatres have various administrative duties that may require volunteers. Your local theatre probably needs a hand in fundraising, marketing, public relations, or community outreach efforts. These are great ways to meet your neighbors and forge new connections outside of the theatre, too.

​Volunteer to be an usher.
In many ways, ushers are the public ambassadors of the theatre. If you like interacting with people, smiling and helping out, you’d really enjoy this very important job.

Work in the box office.
If you have strong multi-tasking skills, this could be a great job for you. Plus, you get to interact with the patrons while offering a service that has a big impact on the theatre-going experience.

Be a financial supporter.
Giving the theatre a monetary donation can be a mutually rewarding experience. Not only does it help the theatre cover their overhead expenses and put on more shows, but it’s a way for you to get involved and to make a charitable donation that could possibly be tax deductible. Everyone's a winner!

Join the board/management committee.
Many theatres have a board or management committee that includes community representatives. See if your local theatre has a board that you can join and help in the daily running of the theatre. Just remember that this can be a significant commitment, especially if you take on specific roles such as Secretary, Treasurer, etc. 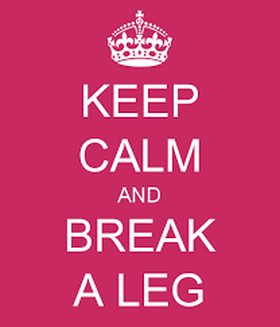 Enjoy cast parties.
One of the best parts of being involved in community theatre is meeting new people and making new friends. After the final performance of a show, the cast and crew often throw a closing or "wrap" party to celebrate all the hard work you put into the show and all the camaraderie you've built while doing so.
​
Have Fun!
Whether you're a newcomer to theatre, or a seasoned stagey pro, there is a certain language to use (or avoid) at the theatre. You know never to wish an actor 'good luck', and you can so much as dare to mutter the M-word in the foyer at your own peril. But why? How did theatre's little language come to be? Here are 12 theatre phrases, and the history behind them.

"Break a leg"
Though we all know you should never wish an actor “good luck”, there are many theories behind why we wish performers shattered limbs instead. One of which comes from a stage's ‘leg line’, a line on the stage beyond which a person could be seen. Once you crossed the line, you were technically a performer and entitled to pay, so wishing someone would "break a leg" would actually be to hope they were paid. Other theories include actor David Garrick being so enthralled by a performance of Richard III that he didn’t notice he’d broken his leg, or that actor John Wilkes broke his leg when jumping on stage after assassinating President Abraham Lincoln.

"Get the show on the road"
This probably comes from the idea of a show starting on Broadway or in the West End, and then touring it to various local theatres around the country. The saying is also applied to circuses and fairs, which travel from town to town across the country.

"Never work with children or animals"
This may just seem like an obvious piece of advice, but it can actually be attributed to a single originator: American comedian and actor WC Fields who probably used the phrase in a routine. At a dinner in Fields’ honour, Leo Rosten said: "any man who hates dogs and babies can't be all bad". Despite the perception that Fields hated dogs and kids, he regularly enjoyed entertaining children of friends and gave positive replies to kids who expressed an interest in his juggling work.

"Don’t say M*cbeth"
One of the theatre’s biggest superstitions is that of The Scottish Play, the M-Word: 'Macbeth. Some believe that during the three witches scene, real spells are cast unless the parts are played by real witches. But there are other reasons as to why people believe the play is cursed. Supposedly, the actor playing Lady Macbeth died at the premiere of the play when a real dagger was used instead of the intended prop, and the Bard had to step in to finish the performance. However, it could just be an old hazing ritual between actors. Whatever the reason, just don't say it. You have been warned. 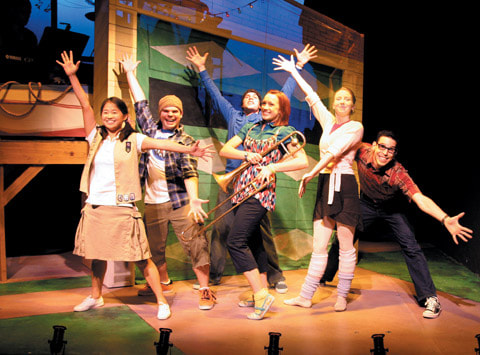 "Bravo"
From the Italian word for ‘good’ or ‘skilful’, ‘bravo’ is used to express praise upon a performer. The phrase dates back to around 1761 when 'bravo' meant ‘brave’. As an exclamation, it meant ‘well done’, much like it does when used today.

"Brava"
What you may not know is that you change the ending of the word depending on who you’re applauding: 'Bravo' for a singular man; 'brava' for one female; 'brave' for a group of women; and 'bravi' for a group of men or mixed performers. So, the next time you want to impress your fellow audience members, have a few of these up your sleeves. (Or just stick to ‘bravo’, everyone will understand what you mean.)

A 'showstopper'
When a part of a performance is so good, the audience reaction is enough for the show to be unintentionally halted until it calms down. This phrase was first used around the year 1916, and is now usually attributed to songs that bring the house down.

​"In the limelight"
​In the 1800s, stages were lit by heating the mineral lime, which created a bright white light for the performers to be seen by all. Therefore, if you’re at the centre of attention, you’re said to be in the ‘limelight’.
"The show must go on"
This saying has its origins in the circus of the 19th century. If a performer hurt themselves, or an animal got loose, the ringmaster with his band would attempt to keep the audience calm by, well, carrying on. The show would distract those looking on from being spooked by a broken leg or panicking at the lion on the loose.

Whistling
This isn't strictly a saying, but something we felt you should know. Back in the day, backstage crews were hired from the crews of ships as much of the rigging in theatres was similar to that of a ship. The sailors would use codes in the form of whistles to communicate the scene changes. If an actor whistled backstage, it might confuse the crew into initiating a scene change, risking injury and even possible death of a performer. It's probably less likely to have that sort of effect nowadays, but still, don't whistle during a show.

Bad Dress, Good Opening
Wishful thinking or not, many stage actors swear that a bad dress rehearsal portends a great opening night. This superstition’s origins are unclear, maybe a producer or director trying to boost a cast’s morale, but it’s a comforting concept when the final dress rehearsal goes south.
No Peacock Feathers, Mirrors, Real Money or Real Jewelry on Stage
These banned items are said to cause forgotten lines, broken set pieces, and more live-performance disasters. The “evil eye” of the peacock feather is blamed for cursing numerous productions, while mirrors are likely called “bad luck” because they interfere with the lights. As for real money and jewelry? These were originally discouraged in an attempt to prevent prop-table thievery.

Get discovered.
Maybe you'll discover a hidden acting talent that can take you into commercial work or other acting endeavours. Sometimes casting agents attend local theatre productions to scope out up-and-coming talent. Who knows, maybe you'll catch their eye!

Reap health benefits.
Studies have shown that getting involved with acting can actually help to reduce work, school, and other life-related stress.