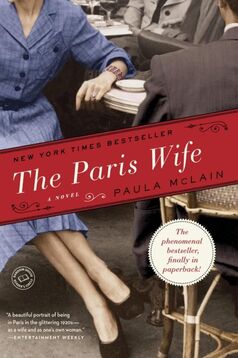 
Ernest Hemingway married four times and this is the story of Hadley Richardson’s marriage to him and their time spent in Paris. Hadley was Hemingway’s first wife.

Hadley was introduced to Ernest by her friend Kate, an aspiring writer and childhood friend, at a time in America where Jazz parties, classical music concerts, poetry readings and experiments with any kind of alcohol based drink was the norm. It was the early 1920s.

Hadley found Ernest, a few years her junior, to be a fascinating character and became sympathetic to his struggle for recognition in the early years of his writing which, at that time, was mostly poetry.

After a whirlwind courtship, they married and set sail for France.

Life in Paris was definitely not one of luxury and contentment but of struggle, both in their relationship and day -to -day living. By day Ernest was writing columns for various newspapers and magazines (whilst becoming frustrated with the novel he was trying to write) and by night both he and Hadley were keeping company with the likes of F. Scott Fitzgerald, Ezra Pound and Gertrude Stein. In such company Ernest is very charismatic but for Hadley, who is a deep thinker and a dignified character, there is a sense of boredom.

They do, however, embark on a holiday to Spain with friends and enjoy most of what Spain has to offer which includes many visits to the bull-ring and participating in the bull run in Pamplona.  Ernest finds this ‘macho’ display exhilarating.

The birth of their son is a joyful occasion for Hadley but she realises that the enormity of this change in their situation is too big for Ernest to handle. His presence in their tiny apartment becomes less and less frequent and it is evident that the marriage is coming to an end. Ernest has many lovers and marries his second wife while still living in Paris.

When Ernest’s first book – “The Sun Also Rises” – was published he presented a copy to Hadley. It was dedicated to her and their son, Brumby. That was confirmation for Hadley that Ernest had a deep respect for her and the early days of their married life in Paris.

Paula McLain must be congratulated on this wonderful novel.

Both Hadley and Ernest are revealed to us as a haunting combination and McLain has brought to life this deeply romantic study of a doomed relationship, portraying Hadley as very dignified in defeat.

A book I found very hard to put down.