A walk among
​the gods

Egypt. The very name conjures up images of mystery and wonder. The Great Pyramids, the mysterious Sphinx, the Valley of The Kings, the beautifully carved statues, the language of Hieroglyphs and the vivid paintings of their gods.

I have always been fascinated by history, boring to some, exciting to me. It is by looking to and understanding those who came before us, that we can better comprehend ourselves. It is difficult for me living in the 21st Century to read the mind set of someone that lived 8,000 years ago, but I want to try. So, I adorn my spiritual body in the clothing of a common man of the period, which is a kilt or skirt made from the fibers of the flax plant, then pick up my staff and begin my walk-through time.

Walking through the sand dunes I come upon an Egyptian man. He tells me his name is Ky. He is quite a handsome fellow that appears to be in his early forties. He immediately puts me at ease with a quick smile and bright, laughing eyes. He stands about 5”6 which is average for this moment in history. His skin is the colour of coffee, made stronger by years of working with the sun as a ceiling. I notice he is barefoot and from what he tells me, footwear is not always worn. Sandals made from plant fibres and leather are available, bare feet just feel better. His head is bare as well, a defence against lice. A wig is available for special occasions.  He wears makeup around his eyes as do all male and females of this time. He explains that his people care very much about their appearance and makeup serves two purposes. The main ingredient is kohl. It is made of black Galena ore which is found near the Nile River. The black makes the eyes appear larger and more attractive. It also protects the eyes from the glare of the, sometimes brutal, sun. Thousands of years before pro football and baseball discovered its usefulness.

Ky and I walk along the tombs and statues miles away from the Valley of The Kings. He graciously pauses as I ask questions. He tells me that in order to understand his people, I need to understand their beliefs. They believe that all things have a soul. Every plant, rock, natural phenomena. Literally everything. They believe in a supernatural power that organizes and animates the material universe. 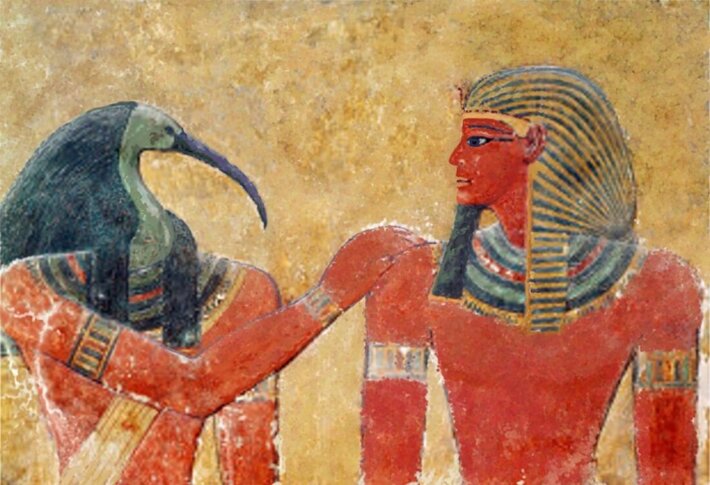 It is early morning with the sand beneath my feet still slightly cool, the Sun just beginning to cast an orange glow across the courtyard walls. Ky appears in deep thought and at first ignores or does not hear my constant questions. I notice he is standing in front of a wall on which is painted a male figure with a bug for a head. When I say that out loud, Ky is quick to correct me. Standing before us is none other than Khepri, God of the morning. The bug is a Scarab beetle, thought to roll the sun disk across the eastern horizon.

Ky shows me another deity nearby. A brightly painted figure with an ibis head. This is Thoth. God of knowledge and wisdom. A hint that I need Thoth’s services.

What about the Nile River that flows nearby, is there a god for that, I ask? Ky walks a few feet further then shows me the carving of a fat man, complete with big breasts. At first, I think he is joking.

This is Hapi, Ky replies. He is the personification of the river which brings us life. He is particularly important among the fertility gods. We sing hymns to him every year to bring the flood and throw offerings in the rising water.

The annual flooding comes during our months of May through August. Heavy precipitation in the Ethiopian Highlands sends water rushing down the Nile, for more than 4,100 miles, before covering the delta and spilling into the Mediterranean Sea. The Pharaoh performs rituals each year to ensure the flood comes, not too little and not too much. The river brings more than water. It carries a few inches of rich silt that nourishes the crops. When the water recedes, there is mud. Most homes and many buildings are constructed with mud bricks.

What do you do to provide for your family?

Ky tells me he is a stone cutter, as was his father and grandfather before him. He is also a foreman who supervises twelve other stone cutters. For his work, he receives payment each month. Six large bags of wheat and two large bags of barley. More than enough for his wife and servants to create the two basic staples of their diet. Bread and beer. Clean water is rare but brewing beer sanitizes the water.

We continue our walk and come to a community of dozens of small houses. This is a settlement of craftsmen who are working on the Pharaoh’s current project. A burial tomb for himself and his family. Ky and the other workers will live here until the tomb is finished. Everyone works for either the Pharaoh or the temple priests. Every chore and action are done to benefit the state, one way or another. 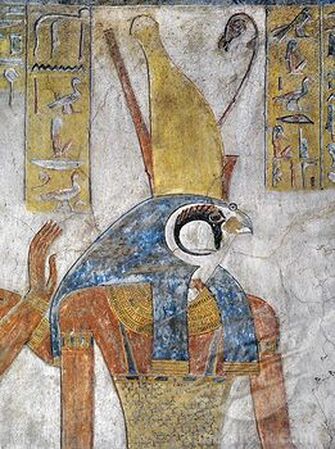 Along the walls I run my hand over the beautifully carved figures, painted so lifelike they almost leap onto the trail in front of me. I see one male figure, richly attired in royal garments, but his head is a bird.

​Ky senses my thoughts and corrects me again. It is a falcon, and he is Horus, son of two of our major gods, Osiris and Isis. Horus is in the sky and the sun. Our protector of kings, healer of those who are sick. His father, Osiris, is the god of death and resurrection. Ruler of the underworld and deceased souls. Isis is the goddess of motherhood, protection and magic.

As we walk along this well-worn trail, I am aware the sun is above us and turning up the temperature. I stay in what little shade the buildings offer. In the space of a few hours, I have learned that these people live and breathe their gods. Every moment of life and death is escorted by one or more deities. While it may seem strange to modern man, the ancient Egyptians served some 2,000 gods. This tradition lasted for centuries until the reign of the Pharaoh Akhenaten. He changed the worship of many gods to just one, Aten, another god that was viewed as the sun disk. He built temples to Aten and closed the temples of other gods. This had a lot to do with controlling the power and influence of the priests.

After the death of Akhenaten, the people quickly returned to the gods of tradition and even tried to erase Akhenaten from their history.

Turning a final corner takes my breath away. For at the end of the pebble paved street is a magnificent temple. Its entrance is guarded by two gigantic statues, soaring some five stories high.

As I gaze upward in awe, Ky tells me this is the temple of Amun, another creator god. The two statues are of the first pharaoh, Narmer. Pharaohs always viewed themselves as the protector of the gods, thereby god-like themselves.

Three little boys come running by, chasing imagined enemies with pretend weapons. Laughing as a dog playfully nips at their heels, with not a care in the world. I guess children have not changed much.

As my tour ends, I see a procession coming into the city. Egyptian soldiers leading men, women and children, all shackled, with fear on their faces. Following them are cattle, geese and servants carrying large bundles. Slaves and spoils from the army’s latest conquest. I guess mankind has not changed much either.

I take Ky’s hand and thank him for showing me a glimpse of his life and the gods of his people. The Sun is setting as he begins to walk westward. Just before he becomes a dark shadow, he turns, gives me a smile and a wink, then vanishes into his creator god.

When I wake in my world, Ky’s world is gone, leaving only fragments behind. But not here, not now. Here the temples and pyramids are still bathed in white limestone. Diamonds in the desert and visible for miles. All hieroglyphs on the walls are painted in bright colours, red, black, white, brown, green, blue and orange.  The animals, the plants, the very history becomes accessible to both friend and stranger. The power of Egypt proclaimed to all the earth.
Lonnie McKelvey is a freelance writer based in Fort Payne, Alabama, and is a regular contributor to Grandparents Day Magazine.