Of German soup and pancakes. 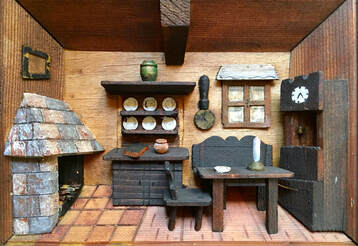 My father was born in Romania where his family had been transplanted 500 years ago, but he considered himself  German. My mother was from Carinthia, Austria so I think it’s safe to say my first introductions to the world were German-based. My mother made traditional Austrian/German food as so much of Central Europe has similar overlapping cuisine. Some people love German food while others hate it. I think since it lacks a lot of seasoning it is more simple and straightforward in taste. I like German food but then like most of us, we have acquired a taste for what we know and were exposed to. This is a good reason to nudge our children to try new things. Having a diverse palate comes in handy when traveling or visiting homes where foods will likely have a different look and taste. This can be a good deal or an ordeal. When my midwife friend went to Tanzania for a birth, a goat was slaughtered to celebrate the delivery.  She was served fresh goat blood soup. She said it was an honor to be served this dish. She did her best to drink it but admitted that it was her husband who had to help her finish it. I told her, “you owe your husband big time”! Ha! For most of us this is an extreme case of food courage. Luckily they got through the meal without offending anyone, and a heck of a story. The closest I have come to food courage is participating in a library program called something like “What the Bug Man Eats''. Yes, our bug man brought samples and to model good eating I ate a worm which I swallowed whole and tried not to think about! My four yr. old did the same. What a parent must sometimes endure just to be adventuresome. But looking back now we are both proud and wear our accomplishment with laughter. An event we are unlikely to forget!

German food is meat and potato-based. In Germany, pork is the most consumed meat. If you like sausages you’re in luck because the delis are exceptionally well stocked with a huge variety of cured meats like sausage and salami. At many butcher shops, you are likely to find a favorite of mine, leberkase semmel (which translates to liver cheese roll)! Don't let the name stop you from trying it! I suppose one could compare it to an American hotdog, bologna, or head cheese but it is so much better when made fresh. It is actually a mixture of finely ground pork, corned beef, bacon, and onions baked into a loaf. It’s kept warm at the deli served on a fresh crunchy roll with a good squirt of mustard. Eating it is heavenly. It’s inexpensive and even fun to purchase as it gets wrapped in butcher paper ready for you to take to a park bench for your enjoyment. The vegetables Germans consume most are potatoes, cabbage, turnips, carrots, beets, and beer. Oh, wait, beer should be listed under grain, jk. Simple hearty menu for people that still shop daily for food. 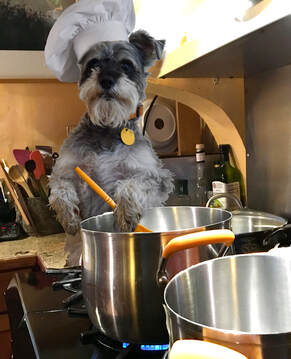 Chef Dalai in the kitchen.
Germany spends more money on organic food than any other country (germanfoods.org).  Bio (organic) food quality ranks high in importance. Pretty much everyone gardens, another sign that Germans take their food seriously. While folks living in apartments don’t have yards it is very common to have Schrebergartens (community gardens). There are over a million and a half of these gardens in Germany.  While I don’t think the average German diet, heavy in meat and bread, seems healthy at first glance, I think they do get a lot right that is working for them. Let’s talk about lifestyle. I love that shops are closed on Sunday giving many Germans a chance to gather with friends/family to hike the beautiful countryside. Even very young children are packed up and expected to walk and enjoy the outdoors. There are so many fabulous beer gardens and country restaurant destinations. When hiking, these woodland restaurants are a welcome stopping point for a cool drink and small eats. Hikers mainly eat what’s known as a schlachtplatte (butcher’s plate), a lovely mix of cured meats, hard cheeses with some pickled veggies, or radishes. It comes with a basket of fresh rolls, bread or pumpernickel. You may find lard on the table that has been nicely seasoned with herbs/spices in place of butter. Believe me, it's delicious! It’s a smorgasbord!

German’s value recreation. They have more skiers than any other country in Europe. The infrastructure supports people walking, biking, taking a bus, or train. My mother actually skied to school when she was young. I’ve seen some cool pictures of her leaning back on her skies to pause and get some sun and fresh mountain air. Many Europeans believe in air bathing since they feel fresh air and sunshine are important for good health. I visited a nursing home there and saw how they bundle up the residents and opened all the windows to let in the fresh air each day. How smart is that? And it is still quite common to see people hang their bedding outside each morning to freshen. Less than half of households have a clothes dryer. Most Germans still find hanging laundry easy, wholesome, and energy-efficient!

Dance is very important in Europe with many regions having their own signature dance. My parents met at a dance in Austria. Later, in the States, they would go dancing every Sat. afternoon at the German Club. Though they danced the polka, it is the English Waltz that they loved best. I remember people stepping back from the dance floor to give them more room as they were breathtaking to watch. I remember how my father often held his hand sideways on my mother’s back when they danced. I once asked my Vati why he held her that way. He told me when he was young girls mostly had only one nice dress to wear going out and a gentleman wouldn’t want to put his sweaty hand on her attire. Wow, for simple folks living in a slower time they sure showed class and respect. My father loved to dance fast! My Mutti, well, she kept up! 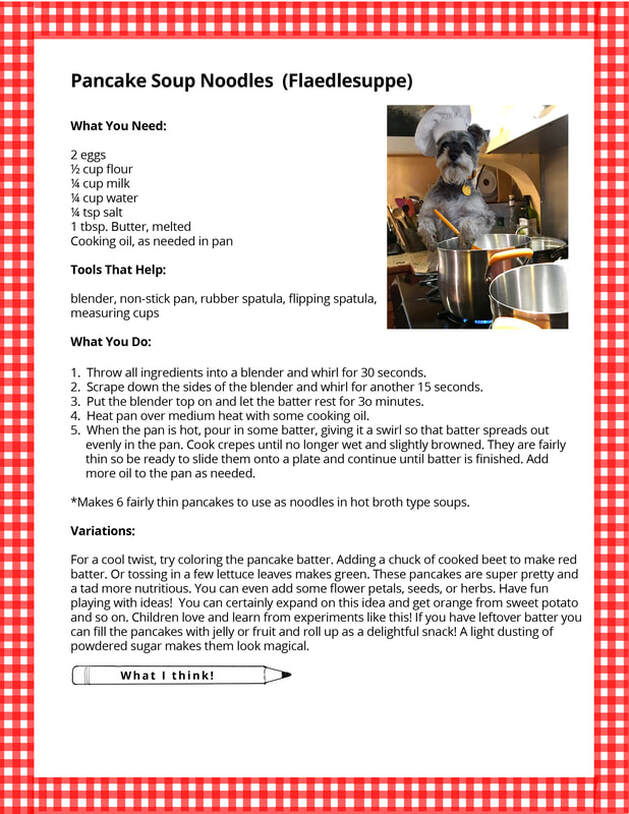 A country rich in customs, daily shopping, family gatherings, love of nature, and movement is wonderful. Having a community and a sense of belonging certainly supports our health and well-being. Stopping for coffee and a pastry is very common and delicious too!  I love torte and baking was my first love...I know it’s best in moderation. What’s moderation? That is the million-dollar question we all need to decide. German people often take a holistic approach, organic food, vitamins, herbalism and being in nature for their health where prevention is as much a part of well-being as a cure. Combining those practices with modern medicine gives them the benefit of both worlds. Germans love going to the spa which is supported by their health care system, but oddly many people have not put down the cigarette. Health is complex as each of us moves forward and a little backward. I’m working on some things too! Like not snacking after dinner! Wish me luck!

Soups are frequently consumed in Germany as a first course or main fare. While the soups are often simple using few ingredients, they are fresh and rich tasting with the addition of herbs and sour cream. I love sour cream and it can always be found in my refrigerator. A little dollop will improve so many dishes (yogurt makes a good substitute)! The best potato soup I have ever eaten was in Germany and to this day my husband and I both wonder...how did they make it so extra good? But perhaps the most famous and unusual food Germans and much of Europe makes are dumplings. There are dumplings to please everyone! They can be sweet, savory, filled with cheese, fruit, vegetables, or meat. The dumplings can be yeast or potato-based dough, steamed, boiled, or fried. The Germans have so many different types of noodles, dumplings, and pancakes that they actually have a category of food called mehlspeisen, (which translates to flour-based dishes). I think it is the most missed food for me. It was hard for me to choose one recipe to share but I decided on flaedlesuppe (German Pancake Soup) noodles because they are super easy to make and perhaps something new for you to try.
This soup was my favorite as a child! I have included my noodle/pancake recipe. I put a twist on the recipe by coloring the batter with some veggies. Of course I did! Striving for a colorful plate  will make our diet more nutritious.

Germany is much more than goulash, schnitzel, torte, and sauerkraut. I encourage you to try these quick and tasty homemade noodles in your next soup. It may be simple but the results are impressive!
​
Dalai und ich wünschen Ihnen ein fröhliches, leckeres Kochabenteuer und ... ich wünschte, wir könnten bei Ihnen sein! (Dalai and I wish you a happy, tasty cooking adventure and...we wish we could be there with you!)